The Orpheum Theatre has, in its time, played many parts.

Over the past 90 years, the historic downtown Vancouver venue has transformed time and again, from opulent vaudeville house, to movie palace, to decrepit grindhouse theatre, to concert venue and permanent home of the Vancouver Symphony Orchestra. It’s a building teeming with history, and nowhere is that history more apparent than it is behind the scenes; from high above the iconic ceiling mural, to the subterranean depths of the ventilation system, to the 40-foot pipes of the organ loft, these places—hidden from all except performers and staff—provide a fascinating glimpse at the many faces of the Grand Old Lady of Granville Street.

“It was built for vaudeville, and from 1927 to ’32, it was part of the Orpheum circuit,” notes theatre historian and BC Entertainment Hall of Fame board member Tom Carter. “There were Orpheum theatres all through the western States and Canada. There were a number of other circuits that went through Vancouver, but the Orpheum was at the top. They had all the biggest theatres on the West Coast, from Chicago westward.”

The building was designed by Seattle architect Benjamin Marcus Priteca (a man responsible for hundreds of Orpheum circuit theatres continent-wide) in a style described variously as “Spanish Renaissance” and “Middle Hollywood.” On Opening Day in November of 1927, audiences thrilled at the building’s opulence. For starters, at nearly 3,000 seats, it was one of the largest theatres in North America, and included all manner of flourishes, including a five-metre-tall, 3,000-pound chandelier; an in-house orchestra; and a Wurlitzer organ that could rise from the basement via a hydraulic lift. Backstage, there were dressing rooms with showers, and even an Animal Room, capable of holding everything from dogs to elephants. By Carter’s account, Priteca wasn’t overly fond of his creation; however, his design philosophy—providing ostentatious designs for minimum cost—contributed to a long relationship with not just the Orpheum, but other theatre chains, including the iconic and now-demolished Pantages Theatre on Hastings Street.

While the stage has since been expanded, the acoustics improved, and a backstage shell added, the Orpheum still retains plenty of its former grandeur; however, as Carter points out, like the performances that have graced its stage, much of that is simple smoke and mirrors. “The entire Orpheum is really just an elaborate set,” he explains. “It looks like you’re in a palace, but when you tap on anything, it’s hollow. It’s all for show. When you get up on top of the dome, for example, it’s just plaster, and the entire ceiling is suspended by wires. And the wires holding it up are still the same wires. It’s still just as they built it in ’27.”

High above the audience, the building’s ceiling mural, painted by artist Tony Heinsbergen, hides a network of catwalks, winches, and lighting equipment, and through a series of grilles, features a truly spectacular view of the room below. And the ceiling’s porous nature served a function beyond the aesthetic, allowing the cigarette smoke that inevitably accumulated to disperse and be replaced with fresh air from the building’s ventilation system (at the time considered state-of-the-art). In fact, the system still functions today, a labyrinthine network of dingy tunnels that run under the entirety of the building, ending with a tall fan deep in the basement.

“One of the most up-to-date ventilating systems on the continent was installed,” notes former Orpheum manager Ivan Ackery in his memoirs. “Air was brought from the outside and blown through a series of water sprays or screens, heated to any desired degree, then forced through a system of ducts which distributed it to every part of the building through hundreds of small pipes which opened beneath the seats. A complete change of air took place every three minutes, and with the aid of these huge air-washers, clean, dust-free air of even temperature was ensured at all times.” 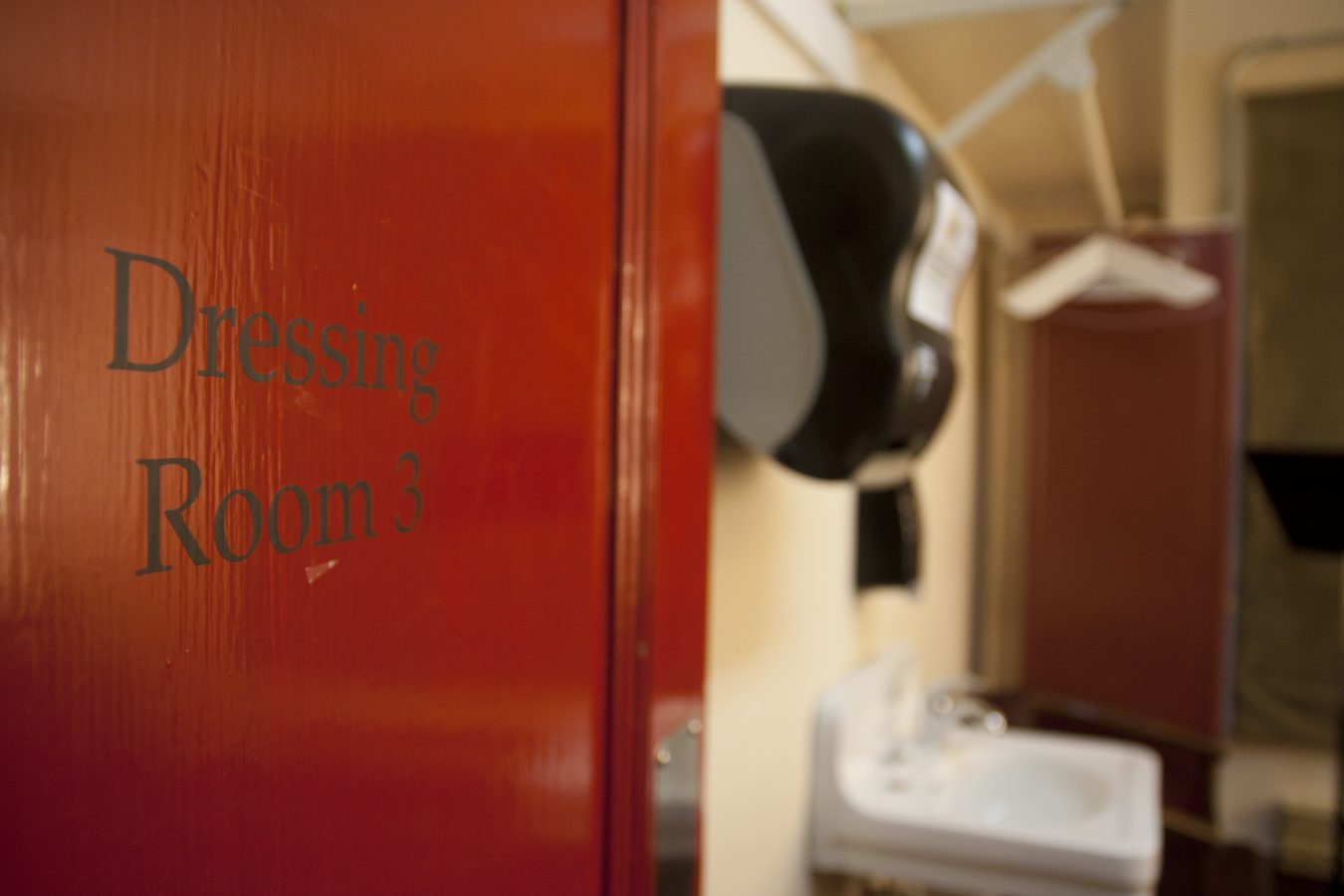 The late Ackery himself was a fixture at the Orpheum once it became a movie house in the late 1930s, known for his flamboyant promotions that included having an acrobat in a gorilla outfit climb the sign to advertise King Kong, and walking a cow down Granville Street with posters on each side reading: “There’s A Great Show Playing at The Orpheum – and That’s No Bull!” He also did his utmost to encourage special acts to accompany films, including live bands, jitterbug contests, and the Nabob Harmony House, a live radio broadcast that ran every Sunday for 11 years. And while it’s now cluttered with A/V equipment, Ackery’s office—located just beneath the stage—retains much of its original charm, from the vintage carpet, to the dark, wood-panelled walls. “I think it’s appropriate that he was down there with all the other artists,” Carter says. “He’s on the same floor as any of the acts would have been, or the orchestra. He’s not trying to be better than anybody else.”

Unsurprisingly, much of the Orpheum’s remaining backstage area is home to dressing rooms and rehearsal space, but it also contains a music library, multiple freight elevators, and an instrument storage room that features virtually every percussion instrument under the sun. However, of all the theatre’s hidden treasures, few are more fascinating than its antique Wurlitzer organ, and the two organ lofts that bring it to life. 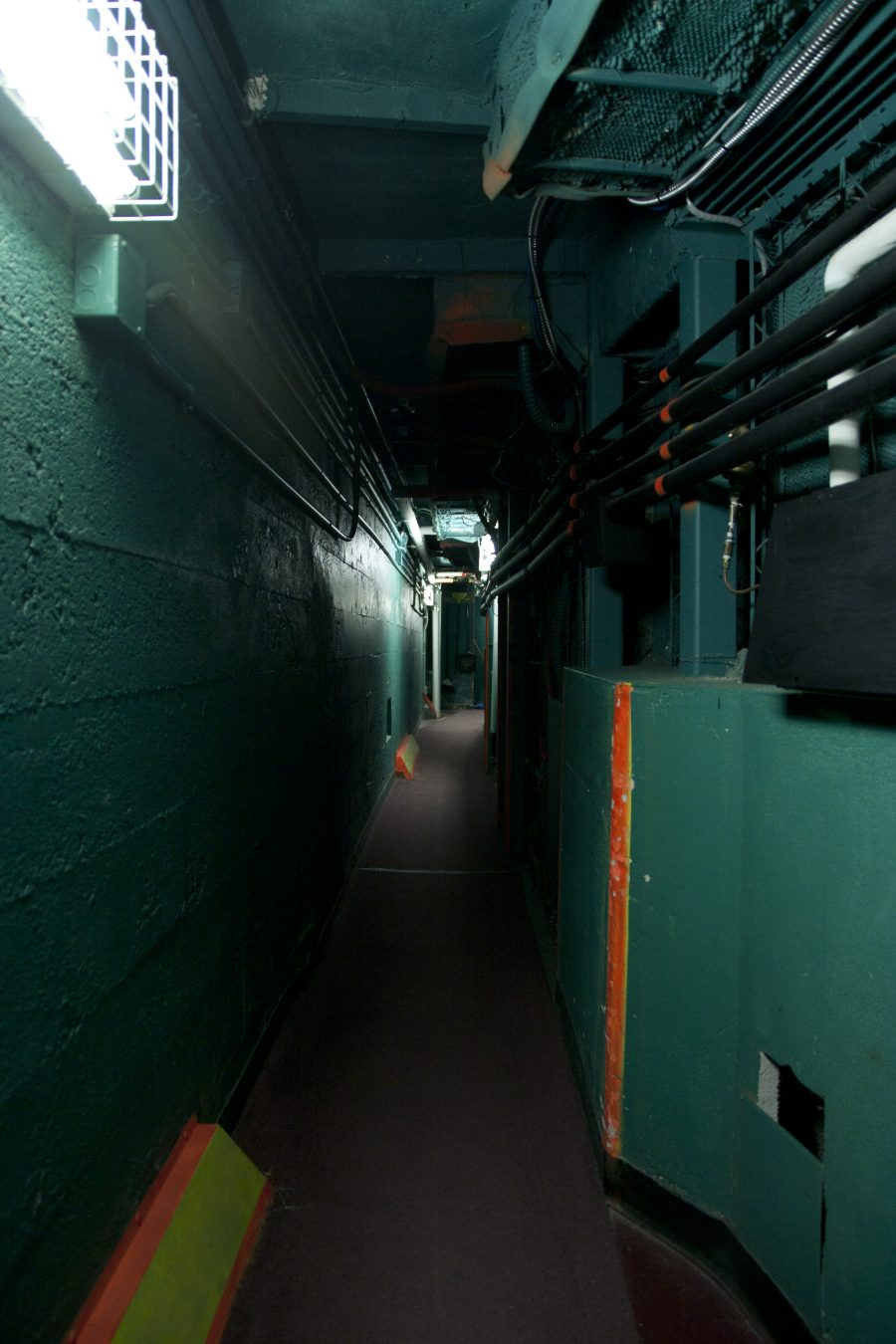 “There is no bigger rush than playing that thing,” says Carter, also an accomplished musician. “It’s massive. You hit a note, and you can hear it coming out of both sides of the stage, out of these pipes that are 40-feet high, and then it bounces off the back of the auditorium. It’s a bitch to play. It’s like driving a 747. But it’s such a rush. I can’t imagine any other instrument that feels quite like that.”

The Wurlitzer—the only theatre organ in Canada that is still in its original home—is truly a throwback to a long-gone age; built into the walls of the building itself, its hundreds of pipes run the height of the auditorium, the sound they produce booming out from the ornate grilles on either side of the stage. The original hydraulics still function, allowing the instrument to be played onstage, or from a small, dimly-lit chamber in the basement outfitted with closed-circuit television. Within the organ lofts themselves, accessible only through a heavy steel fire door, the pipes still gleam, and a thermometer is in place to carefully monitor the temperature. After being neglected for decades, the organ was partially restored in 2017 by two men—Mike Bryant and Bob MacNeur—in time for the Orpheum’s 90th birthday celebration. 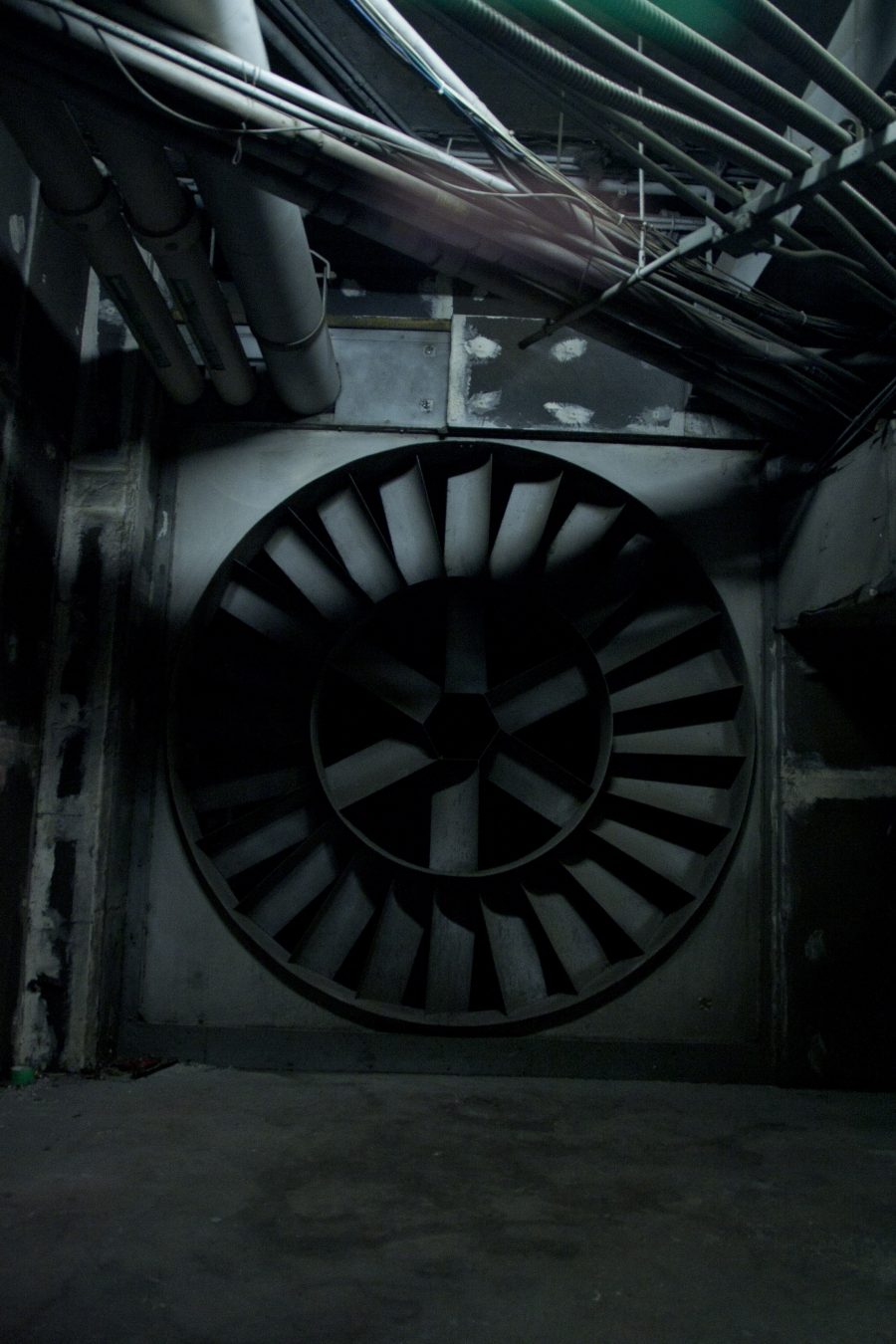 “Bob and I travelled to Vancouver in April to evaluate the organ, and found a hidden gem in the chambers,” Bryant writes in an application to have the instrument listed in the National Register of Significant Theatre Organs. “That’s not to say all was perfect; many things had been done to the organ to address exigent circumstances, but had never been followed up with correct and permanent repairs … In the chambers, though, was some of the most pristine pipework either of us had ever seen. The regulators appeared to be running on original leather, and the chest pneumatics are predominately original zephyr, as are the combination on-off machines in the console.”

While unpopular with local musicians of the day (it was regularly used to replace in-house orchestras), it was a hit with the audiences for the sheer variety of instruments it could imitate, including oboes, flutes, and even sound effects. The organ remained in use after the theatre transitioned out of vaudeville in the early ‘30s, but once the silent movie era officially ended, it showed up only sporadically; manager Ackery trotted it out occasionally in the ‘40s and ‘50s, and it was also featured during a series of Sunday radio broadcasts.

“Paul Michelin used to play on a Sunday evening for a radio broadcast,” recalls former Orpheum employee Alex McKillop in Ackery’s memoirs. “He was one of the best organists around, though he couldn’t read music – it was all by ear. I used to go down the theatre on Sunday evenings to put the lights on and set things up for Paul’s broadcast. It would be about five minutes to the hour when transmission was to begin, and Paul wouldn’t be there. We’d be pulling out our hair when all at once we’d hear a pounding on the Seymour exit door. I’d run out and open it up and there would be Paul – seven barrels under the wind and another guy with him just as bad, holding him up. Between the two of us we’d carry Paul in and sit him on the organ bench, and honest to God, he’d play a perfect show, and without music sheets… sober or drunk, he was great. It used to amuse me to think of the radio audiences out there thinking what a wonderful show it was, and having no idea of what was going on.” 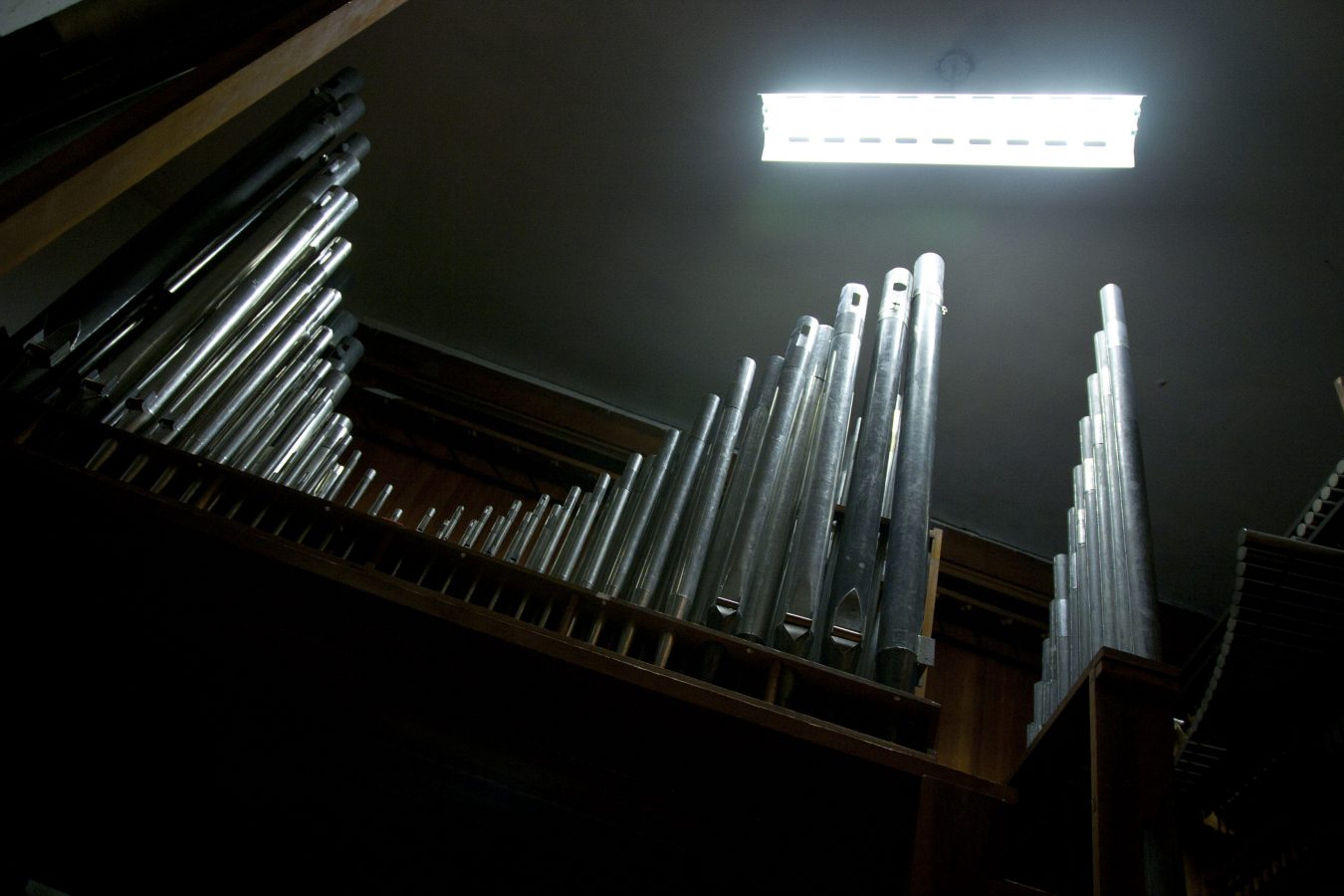 Unfortunately, by the time the 1970s rolled around, both the organ and the theatre that housed it had fallen on hard times. “It was a run-down, mangy old theatre,” Carter recalls. “I remember seeing films there in the early ‘70s with my parents. And there was this big candy counter, like you’d have at any other movie house, and it looked so out-of-place amongst all that baroque plasterwork. It smelled like cigarette smoke. The seats were worn all the way down to the wood. And everything was greasy. Can you imagine decades of people with popcorn grease on their hands, wiping them on velvet?”

With movie attendance on the decline, and without the then-retired Ackery’s flair for promotion, Famous Players announced, in 1973, that it would gut the building and turn it into a multiplex. But public outcry was immediate. City Hall was besieged by more than 8,000 letters, and even Ackery himself came out of retirement to help save the historic structure. In the end, the city managed to purchase the building from Famous Players for roughly $4 million, with money from the civic and federal governments, the Vancouver Foundation, provincial grants, and fundraising. Renovations began in November of 1975, and included the construction of a permanent shell around the stage, enlargement of the stage itself, new rehearsal space, and new wiring, plumbing, and interior fixtures. They even rehired an 82-year-old Tony Heinsbergen to retouch the famous ceiling mural.

The venue’s grand reopening took place in April of 1977 (featuring a Vancouver Symphony Orchestra presentation of Ravel’s Shéhérazade), and while many of her former competitors have since been demolished—The Majestic in 1967, The Strand in 1973, The Capitol in 1974, and The Pantages in 1994—the Grand Old Lady of Granville shows no signs of slowing down. Despite her many transformations over the past 90 years, she remains a hit with performers, audiences, and architects alike, and thanks to her new lease on life as a civic theatre, seems poised to remain, as then-Mayor L.D. Taylor said on opening day, “a civic institution belonging to the people; a place of amusement where music, drama, and art may be enjoyed amid surroundings that appeal to the better instincts of all individuals.”

This story from our archives was originally published on Jan 2, 2018. Read more from Hidden Vancouver.

The Dangers Ahead in Afghani Mass Resettlement

The booster debate: Will you need a third COVID-19 shot? – National

The Magic of HATSU’s Iridescent Collection