A Slovakia-based firm is showcasing what it says is the first globally, commercially available full-size electric skid steer, displaying the machine during last week’s Condex equipment show in Las Vegas.

Along with the skid steer, Kovaco Electric is promoting its electric MiniZ 400 compact utility loader, joining other electric offerings in this machine category, such as Toro’s e-Dingo.

Both machines have been available in the U.S. in a limited capacity for around two years.

With a rated operating capacity of up to 3,000 pounds, the Elise 900 skid steer has three electric motors; two operate the drivetrain and one operates the hydraulics.

Pricing for the skid steer — which does not include transport costs — starts in the low $60,000s, says Joe Schinasi, Kovaco Electric business development, talking with Equipment World during the show, which was held during the Associated Equipment Dealer’s annual Summit.

The 240-Ah battery is also hot swappable, allowing one battery pack to charge while the other is in use.

Kovaco Electric offers smart battery versions that do not require the batteries to be charged up to 100% each time. The 400-Ah unit has a 5.3-hour charging time (3 hours for an 80% smart battery charge) and a battery life of up to 8 plus hours, says Kovaco. The machine can be charged 1,700 or more times up to an 80% charge.

One of the more intriguing things about the Elise 900 is that it can be operated one of three ways: in the cab, remote control via a console (which can be shared with the compact utility loader) or by using an app. The app can be accessed via the Samsung phone display that comes with the machine or downloaded via the Apple or Android app on a user’s mobile phone.

“The phone display serves as the dashboard, telling you such things as the remaining battery charge,” Schinasi says. “It doesn’t take long for operators of existing skid steers to to learn how to operate the machine.”

(A video outlining how the machine is operated from a phone app is shown at the end of the article.) 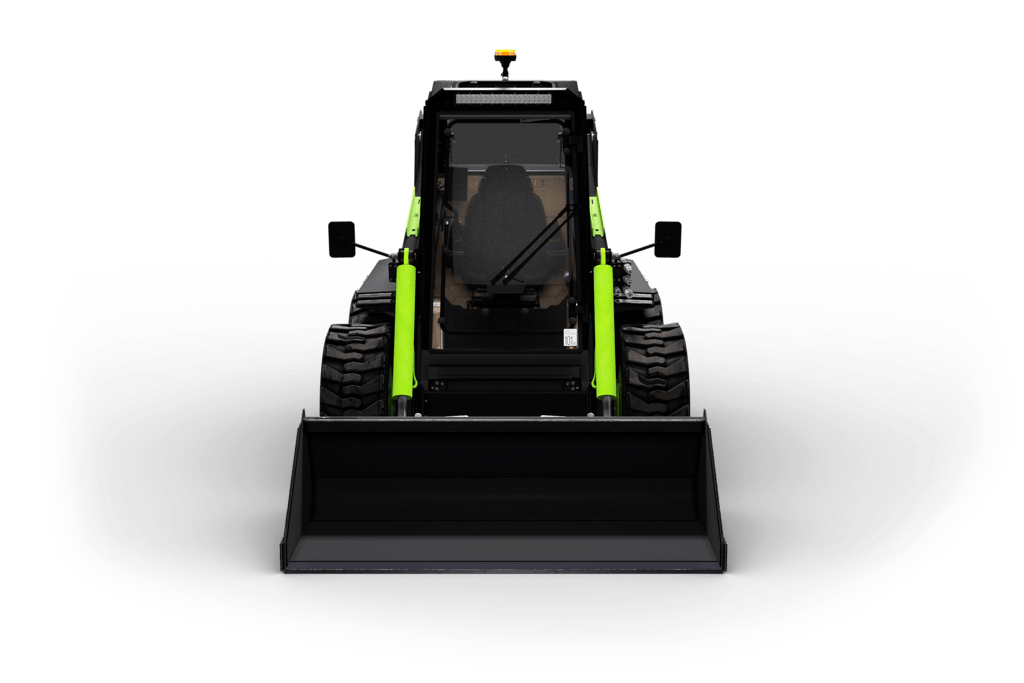 Kovaco ElectricEarly U.S. adopters include California-based Silverado Contractors, which has used the machine during an interior hospital construction job, according to Schinasi. The machine has also been used by farmers and zoos concerned about animal health.

The Elise 900 has 47 degrees of tilt and a maximum climbing angle of 35 degrees. Maximum travel speed is 7.46 mph. It has a universal quick coupler and so can accept other attachment brands, although Kovaco offers 39 of its own attachments.

Kovaco says the primary maintenance items on the Elise 900 would be those related to the hydraulic system – filters and oil change service intervals – and track replacement, items in common with its diesel counterparts.

The basic machine comes with a 240-Ah battery pack, a charger, the cellphone display and display holder, and a bucket. 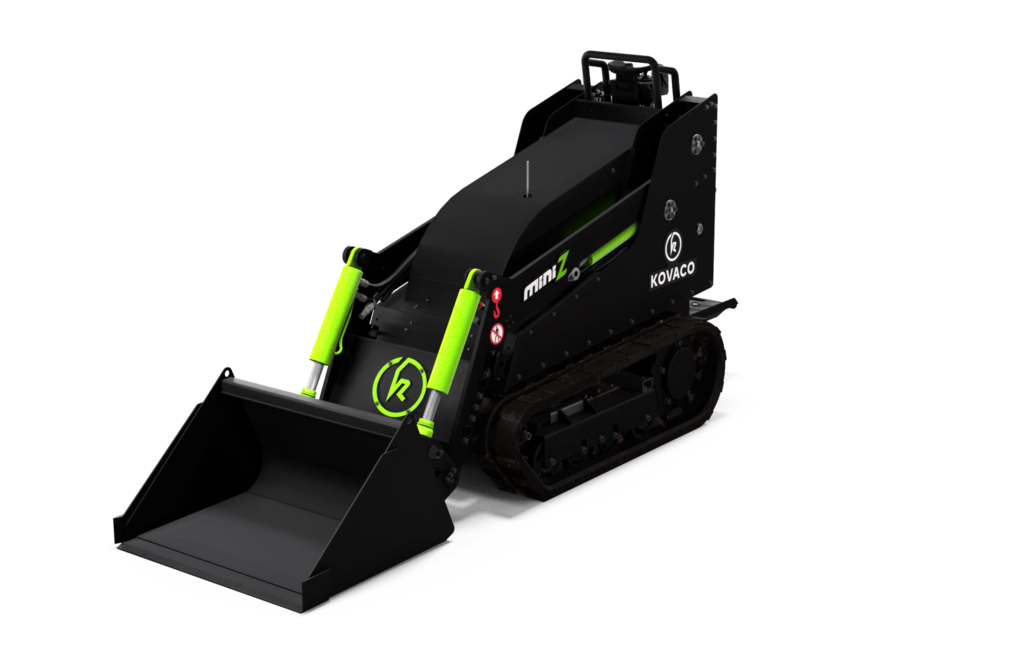 As with the skid steer, the Kovaco MiniZ 400 compact utility loader uses three independent electric motors – two for the drivetrain and one for hydraulics.Kovaco ElectricKovaco’s electric MiniZ 400 compact utility loader is a good alternative for landscapers, Schinasi says. “If a landscaper wants to start their day very early in the morning, using a loud diesel machine limits the amount of operating time that they have,” he says.

The 48-volt/225-Ah machine, with an 882-pound rated load capacity, has a removable control console that doubles as a remote control operable within 164 feet of the machine. Users can choose to either stand on the fold-down platform or walk behind the machine.

A 2,425-pound operating weight, the machine has a 1,764-pound tipping load, maximum travel speed of 3.1 mph and an overall width of 31 inches. As with the skid steer, the compact loader uses three independent electric motors, two for the drivetrain and one for hydraulics.

It comes with a basic bucket. Users will need to either buy one of Kovaco’s 14 attachments or install a plate adapter to use other attachment brands. Using such a plate “might extend the boom a little bit so it might reduce the the lift capacity slightly,” Schinasi says.

Kovaco Electric identifies itself as an independent division of Kovaco, which was established in 1991. It has been in the U.S. since 2019 after having shown the Elise 900 at the 2019 Bauma trade show in Munich, Germany.

The company’s dealer development is still in its early stages. In the U.S., the company lists 10 dealers on its website, including Hamre Equipment of Chico, California, which provided the equipment for the show.

Kovaco Electric produced this video on the phone app control of the Elise 900:

Deere Seeks to Improve Technology After Split From Hitachi

How to Repaint Construction Equipment

Wellness Benefits of Zoning Your Kitchen