Ghost signs: The slowly fading hand-painted advertisements that cling to the sides of older buildings, redundantly promoting companies, products and services that disappeared long ago. I’ve been interested in them since I was a kid, because they trigger my curiosity about what was here before my time. Every once in a while, I’ll stumble across a ‘new’ old ghost sign that has re-emerged. Sometimes I’ll get a tip out of the blue about one I hadn’t known about.

Recently, Toronto heritage and history advocate Adam Wynne messaged me to ask if I had any information about a ghost sign on the south side of 111 River Street in Toronto. This early 20th century residence is among a number of other dwellings currently under threat of demolition in the area. 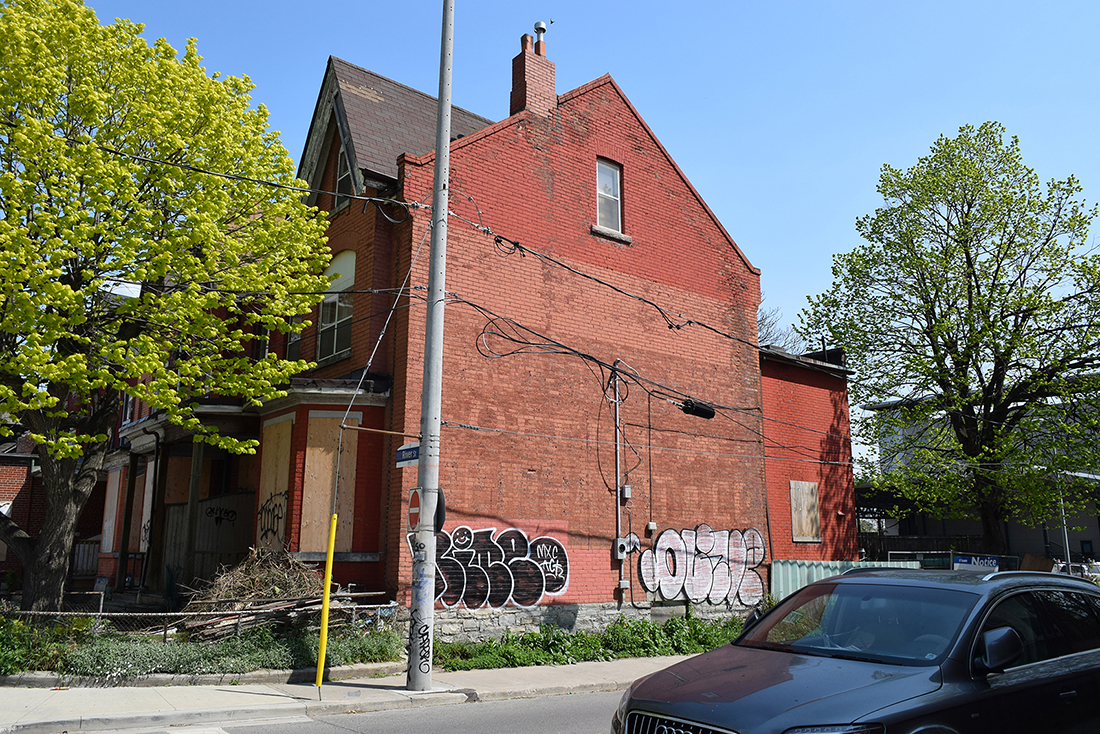 I wrote back that I had nothing on it. Searching the address on Google street view, I quickly saw what Adam had noticed, but it was quite a mess, the only words still legible were “Office … & Co.” It appeared that at some point, the sign had been covered up with paint that has since worn away in patches. I’m always intrigued by a ghost sign mystery, so I agreed to investigate.

As usual, I started my research by cross-referencing the address in the Toronto City Directories and Goad’s Fire Insurance Maps online. Unfortunately, the names of the occupants from the directories in the 1900s and 1910s offered no solid clues as to what might be on the wall. However, the fire insurance maps were an instant goldmine of hints. The maps clearly illustrated that the row of River St. houses starting with number 111 was present in 1913, but missing from the next earliest available map, from 1903. With that information I gained a rough date of the construction of the house.

Flipping through Goad’s maps, it was apparent the houses in the area were tied closely with industry: a Soap & Oil Works, Jam & Jelly Factory, a Tannery and a couple of Breweries stood nearby. The house at 111 River St. Had actually shared a large lot with some form of brewery since 1884, the earliest fire insurance map of the area available online. Thomas Allen owned the brewery at that time. 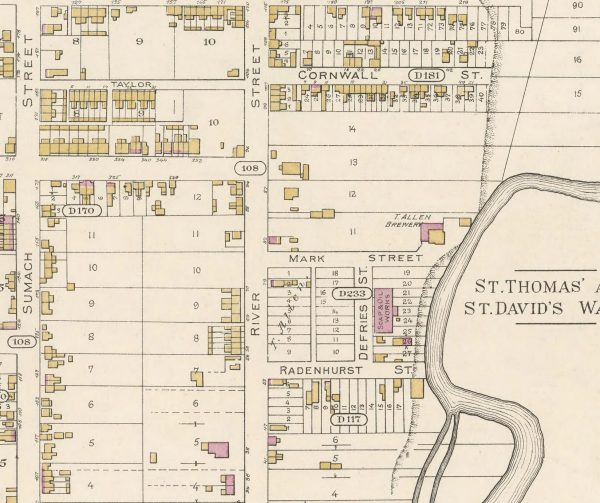 The older maps also made it clear that River St. And the surrounding area was a place we would barely recognize today. The waters of the naturally meandering Don River lapped close to the east side of the brewery. Dundas Street East did not pass east of River St., and it was called Wilton Ave. The maps also revealed that Mark Street had an ongoing identity crisis, changing its name back and forth from Mark to Blevins, and back again as the years progressed.

Having exhausted the online map resources I then jumped back to the City Directories and found that the brewery was sold to Charles Laister in 1885, the proprietor of the Reinhardt Brewery. In 1890 the ownership title was updated to Reinhardt & Co. That “& Co.” was the first reference I’d found, and lined up with some of the remaining letters on the ghost sign. 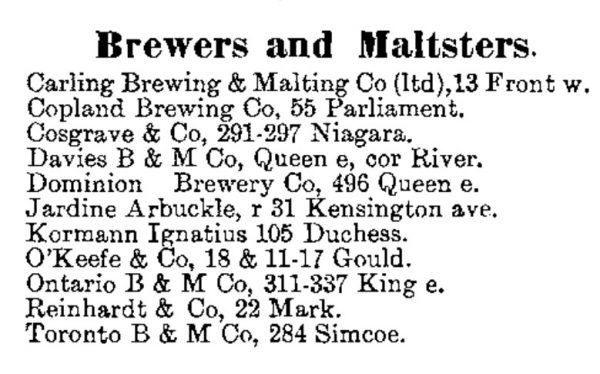 1890 Toronto directory of Brewers and Maltsters

Upon re-opening Google street view of the wall, it finally clicked! This was a directional sign pointing to the Offices of the Reinhardt Brewery. It even had one of those old-timey hands pointing east to where the brewery stood on Mark St. The blurry images of the half-disintegrated wall sign started to make sense. 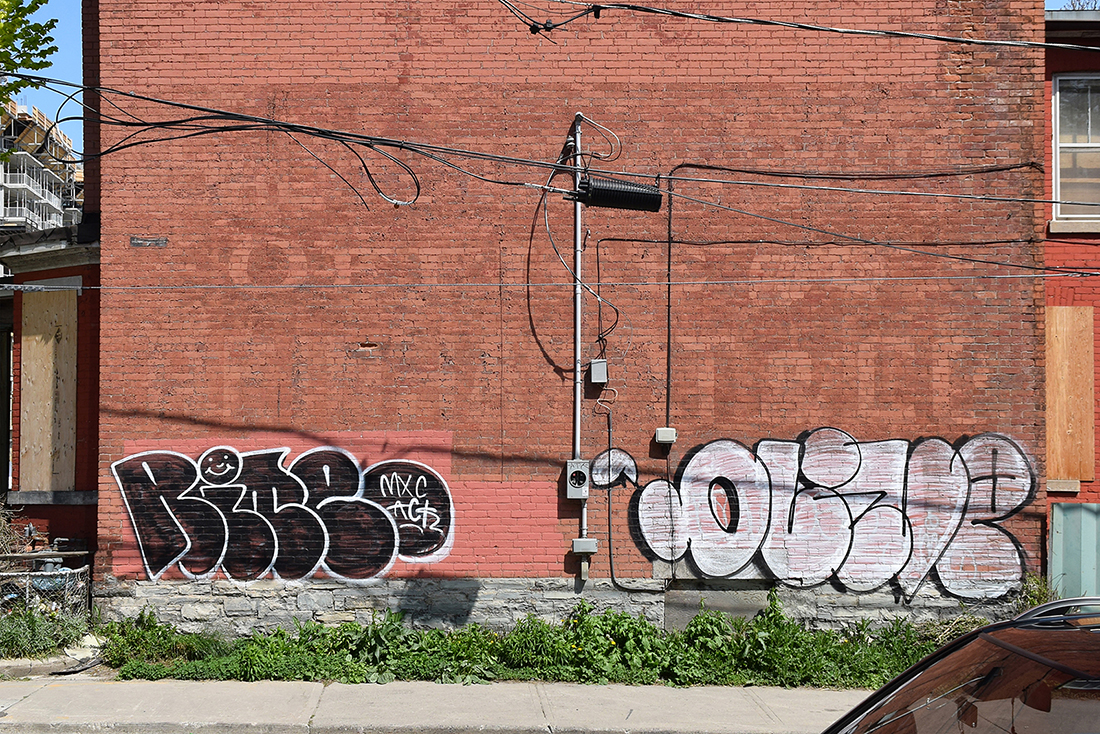 In Photoshop I began tracing what lettering I could make out, while substituting the missing pieces, creating a rough graphic of what might have been there: “Office – Reinhardt & Co.”

Although there was still more lettering above to decipher, I messaged Adam about the discovery. “Could the top line of text say, ‘East End Brewery,’ above ‘Offices?’” he replied.

Jumping back to Google street view, I stared closely at the faded sign over several years and different angles, and discovered that the right side of the upper lettering was ‘Brewery’, but the leading text was something else. Recalling the history of the building, I then realized that the word was “Salvador.” After September 1st, 1909, the Reinhardt Brewery discontinued bottling Bavarian Lager and began exclusively brewing “Salvador” beer.

The Ontario Temperance Act was passed in 1916, bringing prohibition to the province. Although liquor could still be manufactured in or imported to Ontario, this new law must have seriously impacted Reinhardt & Co., because the owners put the brewery up for sale in 1917. 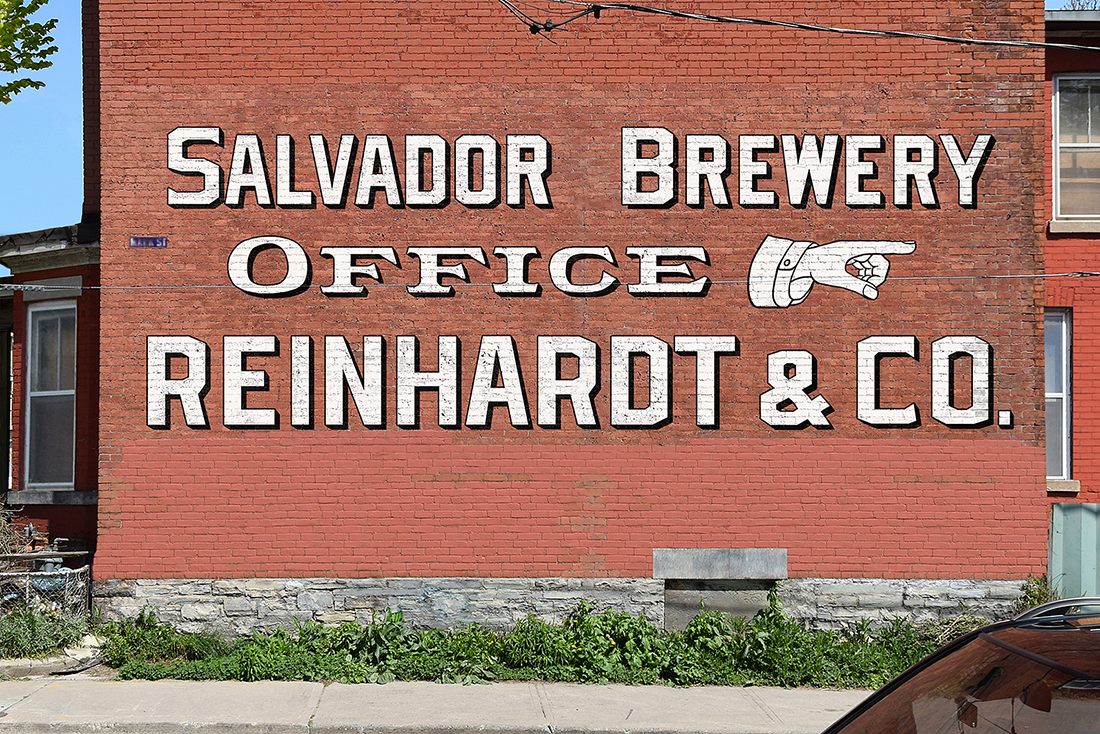 Reinhardt’s was subsequently sold several more times, but still retained its name for decades. The last brewer to own it was O’Keefe’s, and the company called it their East End Brewery. The tradition of brewing at that location ended in 1953, when the building became a Central Storage Company warehouse; all of the brewing equipment was removed. The old brewery’s new use as a storage facility did not last very long, however. It was destroyed by fire in 1957. The property is currently home to Mercedes-Benz Downtown Toronto.

I believe there may be more hidden text on the Reinhardt Brewery ghost sign beneath the remaining layers of paint. Maybe, someday, those words will reveal themselves.

Adam is quite happy with the results of this interesting discovery. He used my rough reconstruction graphic of the ghost sign as part of a deputation to recommend preservation at a Toronto and East York community council meeting. As a result, his deputation has been forwarded to Heritage Preservation Services for further review. I’m hoping he’s successful, as I would love to see a bit of old Regent Park preserved, maybe even with this ghost sign to nowhere restored to its former glory. I have my paint brush ready!

Jeremy Hopkin is a Toronto-based artist, graphic designer and local history aficionado. He volunteered as a committee member of the Scarborough Historical Society for 15 years and served on the board of the East Toronto Preservation Panel. Follow him on Twitter at @jeremy_hopkin.

COVID-19: Should a B.C. drug dealer with cancer be going to jail during a...

Video Vancouver: Can The Power Grid Handle A Surge In Electric Cars?