Compared with the previous 980M and 982M powershift models, Cat says its new 980 and 982 wheel loaders are 10% more productive and lower maintenance costs by 20%.

Cat is also adding 980 XE and 982 XE models to the lineup, which feature a continuous variable transmission to increase fuel efficiency up to 35% and lower maintenance costs as much as 25% compared to the M series models.

For example, Cat’s new Payload with Assist — providing an accurate weighing of bucket payloads — is now standard on all 980 and 982 loaders. The system also includes low lift weigh and manual tip-off functions. “This gives the operator real-time information on his display on how much he’s moving with the bucket,” says Scott Schmidtgall, Cat loader applicational specialist. “This helps prevent both over- and under-loading.”

“During loading, Auto Set Tires puts weight on the front axle as you come into the pile so that you have the traction you need to efficiently load the bucket,” Schmidtgall says. While offering an assist to more novice operators, Auto Set Tires can also aid veteran operators during the times when they may not be paying attention. “These guys know what they’re doing but if they do get distracted or fatigued, this will take over and make sure they are being efficient in their cycles,” Schmidtgall says.

The models also include Application Profiles, which allow operators to pre-set machine settings for frequent tasks. “Operators may be going from truck loading to stockpiling to a load-and-carry application,” Schmidtgall says. “With a single touch of a button, this allows an operator to change the settings so the machine is set up the way he wants it for each application.”

In addition to the standard technology, owners can move up to the optional Cat Advanced Payload with Assist system, which adds Tip Off Assist to automatically match the load of the final bucket to the hauling unit target. The system also includes enhanced lists management, site integration and extended scale features. It is compatible with third-party scale house software, and with an additional Dispatch for Loading subscription, it can wirelessly integrate the machine in the scale house process.

“Operators can create and identify trucks, materials and customers,” says Schmidtgall. “They can also retrieve that information both on and off the machine.”

Completely differentThe 980, shown here in the XE model, is designed as a three-pass loader for lighter density material applications such as loading up to 24 trucks an hour in a quarry.Caterpillar

Don’t be fooled by the exteriors of the 980 and 982, Schmidtgall says. “They are completely different designs.” The two machines have a different frame, transmission, linkage, tires and rims, he says.

Schmidtgall says the 980 is a great three-pass loader for lighter density material applications such as loading up to 24 trucks an hour in a quarry.

The 982 comes to the forefront in applications with higher production demands, according to Schmidtgall. “The 982 is rated up to 14 tons, so you can keep that two-pass production up especially in peak times.”

The two machines do have some commonalities, including technology such as a remote door switch, which also prompts the machine’s lights to come on. “Now they’ve got great illumination around the machine to get their daily maintenance checks done,” Schmidtgall says.

Cat says extended fluid and filter change intervals on both the 980 and 982 models reduce maintenance costs by up to 20%, and on the XE models, up to 25% cost reductions can be realized.

“We’ve got a brand new electronic architecture that allows us to introduce features such as Remote Flash and Remote Troubleshoot, which connect the machine with a dealer for software updates and service issues,” Schmidtgall says. Remote Troubleshoot connects the machine to your dealer to diagnose fault codes without an on-machine cable connection. Remote Flash allows software updates to be pushed to the machines; customers can then schedule update installations when convenient to production schedules.

All four models feature more leg room and a new adjustable suspension seat; the premium level seat includes heated/cooled options. Seat belts are now monitored, and owners have the option to connect the seat belt with an exterior beacon.

The new dashboard and high-resolution touchscreen display guide operators through control and operating functions. A seat-mounted electrohydraulic joystick steering system is standard, although a steering wheel is also available on the 980 models.

The push-to-start system requires a valid Operator ID passcode to start the engine. An optional Cat Bluetooth key can also be used.

As stated, the 980 and 982 XE versions feature a CVT, a transmission the company is now using on its 966- and 972-size XE machines. The CVT combines a direct mechanical path from the engine to the wheels with a Hystat variator.

“We’ve got more than 3,000 966K and 966M Series XE machines in the field,” Schmidtgall says. “We’ve taken that design and upsized it for the 980 and 982. It’s running at lower rpms, so that lower fuel burn gives us up to 35% better fuel efficiency in truck loading applications.”

This fuel efficiency is the result of the deep integration of the CVT, engine, hydraulic and cooling system, Cat says. Since the torque converter has been eliminated, the CVT gives the machine the ability to control engine rpm and machine speed independently. A lower rated engine speed reduces component wear and operating noise.

All versions of the 980 and 982 — which are produced in Cat’s North Little Rock, Arkansas plant — are expected to be on the market in August. 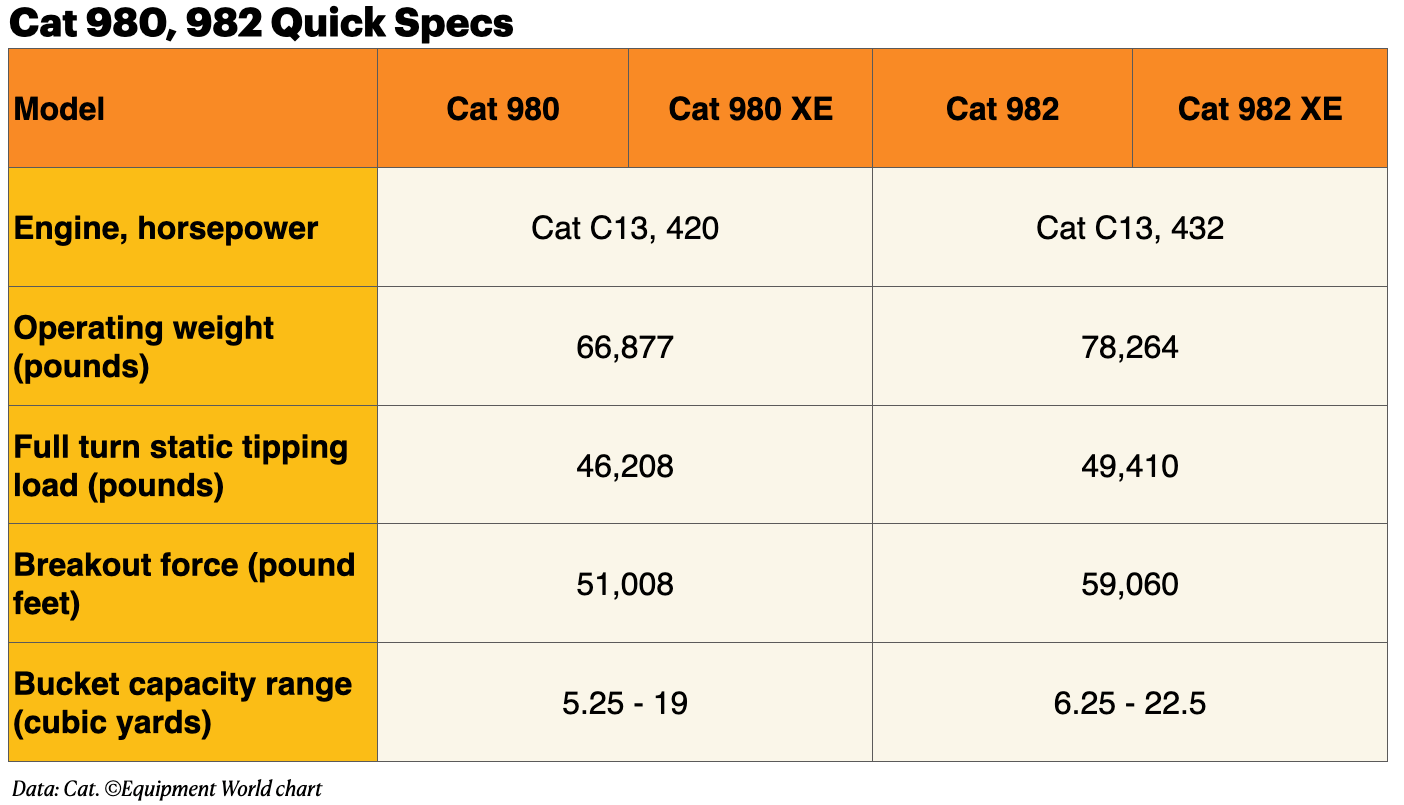 How to Increase the Efficiency of Your Refrigerator