Though the PNE Fair has been cancelled for a second year in a row due to COVID and Playland’s opening weekend pushed back, Vancouver’s beloved amusement park is still hoping to open this spring with reduced capacity and safety protocols in place. In this story from our archives, we look back at the construction of its prized attraction, the Wooden Coaster, the oldest roller coaster of its kind in Canada.

In August of 1958, in a partially-completed amusement park on the eastern edge of the Pacific National Exhibition grounds in East Vancouver, Walker LeRoy strapped a piece of plywood to a half-finished rail car at the base of the park’s new one-kilometre wooden rollercoaster, grabbed hold of a length of rope, and prepared to pull the lever.

That he was about to undertake the ride’s maiden voyage without a safety bar, seat belt, or even a seat didn’t seem to bother LeRoy. For one thing, he’d supervised its construction over the previous four months alongside famed and trusted American rollercoaster architect Carl Phare; for another, he stood to make $100.

“When the engineers at the time came out, and the Coaster was just in the beginning stages of construction, these guys took a look at the plans and said, ‘It’ll never get around the track,’” explains PNE spokesperson Laura Ballance, who knew the late LeRoy. “Because other than the motor that takes you to the top of the first hill, it’s entirely momentum and the laws of physics. But Walker told them, ‘If Carl designed it, it’ll get around.’ They bet him $100—which was a lot of money in the mid-50s—that it would never work.”

Initially referred to as the Giant Dipper (and later simply called the Wooden Coaster), the ride that LeRoy was about to take was the largest of its kind in Canada, built to coincide with British Columbia’s centennial and with the official opening of the PNE’s newest attraction: Playland. LeRoy hadn’t forgotten the engineers’ skepticism, and now, with the date of the ride’s final inspection at hand, he was ready to show them just how wrong they’d been.

So, he rode the Coaster sitting on a piece of plywood. “He told me this story on many occasions,” Ballance recalls via phone. “And he would laugh and laugh, and say, ‘And when I rode into the station, those engineers picked their jaws up off the floor and passed me over their $100.’”

The Coaster’s first trip around the track was an unqualified success. And even now, celebrating its 60th anniversary in 2018, Playland’s signature ride continues to excite and terrify generations of fair-goers, iconic not just for its thrilling drops and turns, but also as a sort of city monument. “It’s a national treasure,” Ballance asserts. “It’s a piece of amusement park history. And, I think, it’s one of the most beautiful elements of the Vancouver skyline. It’s iconic.”

When Carl Phare was asked to design the ride, he was a man nearing the end of his career. A 50-year veteran of the business, he’d quit school at 16 to take a job at Coney Island, and, after learning about science and design through correspondence courses, bought his own amusement park in Washington State in 1931. By 1956, when he began work on the Vancouver attraction, he had already designed more than 30 rollercoasters across North America—including a Giant Dipper for the PNE’s previous amusement park, Happyland (located where Hastings Park is today). While working on the design, Phare—then in his mid-seventies—knew it would be his last, and was determined to make it an experience that fair-goers wouldn’t soon forget.

Built entirely on-site (which was unusual for the time), the ride cost $200,000 (remember, that’s in 1958 dollars), and required a team of 300, supervised by LeRoy. The tracks—which contain 220,000 board feet of timber—were made from local Douglas fir, specially treated at a plant along the Fraser River; when the ride was finished, the fair expected it would last 40 to 50 years. The fact that it has survived much longer than that is a testament to the park’s maintenance protocols. Upkeep is undertaken 365 days a year (because the wood expands and shrinks depending on the season, the tracks are watered down in the summer to keep them from reducing too much) and because it’s a “living” (read: wooden) coaster, much of the off-season is dedicated to repairing, and sometimes replacing, portions of the track.

“There probably isn’t a more highly maintained ride in Canada than that Coaster,” Ballance says. “And the team that works on it are nothing less than exceptional. Because it’s a living coaster, you’re able to replace wood as needed. You’re able to maintain it past the life that a steel coaster might have. We just completed a major, five-year restoration of that Coaster, where we’ve gone from literally one end to the other and replaced a significant portion of the wood in order to give it another 50 to 60 years of life.”

When the Coaster welcomed its first riders in the summer of 1958, it wasn’t a moment too soon. By the mid-1950s, the fair simply wasn’t attracting the crowds it once had. Between 1954 and 1955, annual attendance dropped by 121,000 people; between 1955 and 1956, those numbers decreased by another 16,000. Despite steady profits, the PNE was being dismissed by fair-goers, and called costly and monotonous in the pages of the local papers. “We are not going to presume to tell the exhibition management how to run their business,” griped The Province in September of 1956, “but we think we speak for the majority of fair-goers when we say that PNE will have to do more than put on the same old performance year after year.”

With B.C.’s centennial swiftly approaching, the PNE and Burrard Amusement Company (the future Playland’s owner) embarked on a bold plan to revamp the fair; more than $1 million was invested in demolishing Happyland and building a new amusement park, complete with rides, modernized buildings, and even a new stadium to be known as the Pacific Coliseum (although that particular part would ultimately be delayed by 10 years). Talk of the new “gayway” hit the papers in the summer of 1957, and the news was immediately met with a storm of opposition from neighbourhood inhabitants who were concerned about crowds and construction noise. “It will be like the charge of the light brigade every evening until midnight,” complained resident Herbert Sperring in The Province. “Girls shrieking, the smell of hot dogs, and paper blowing all over the place.” 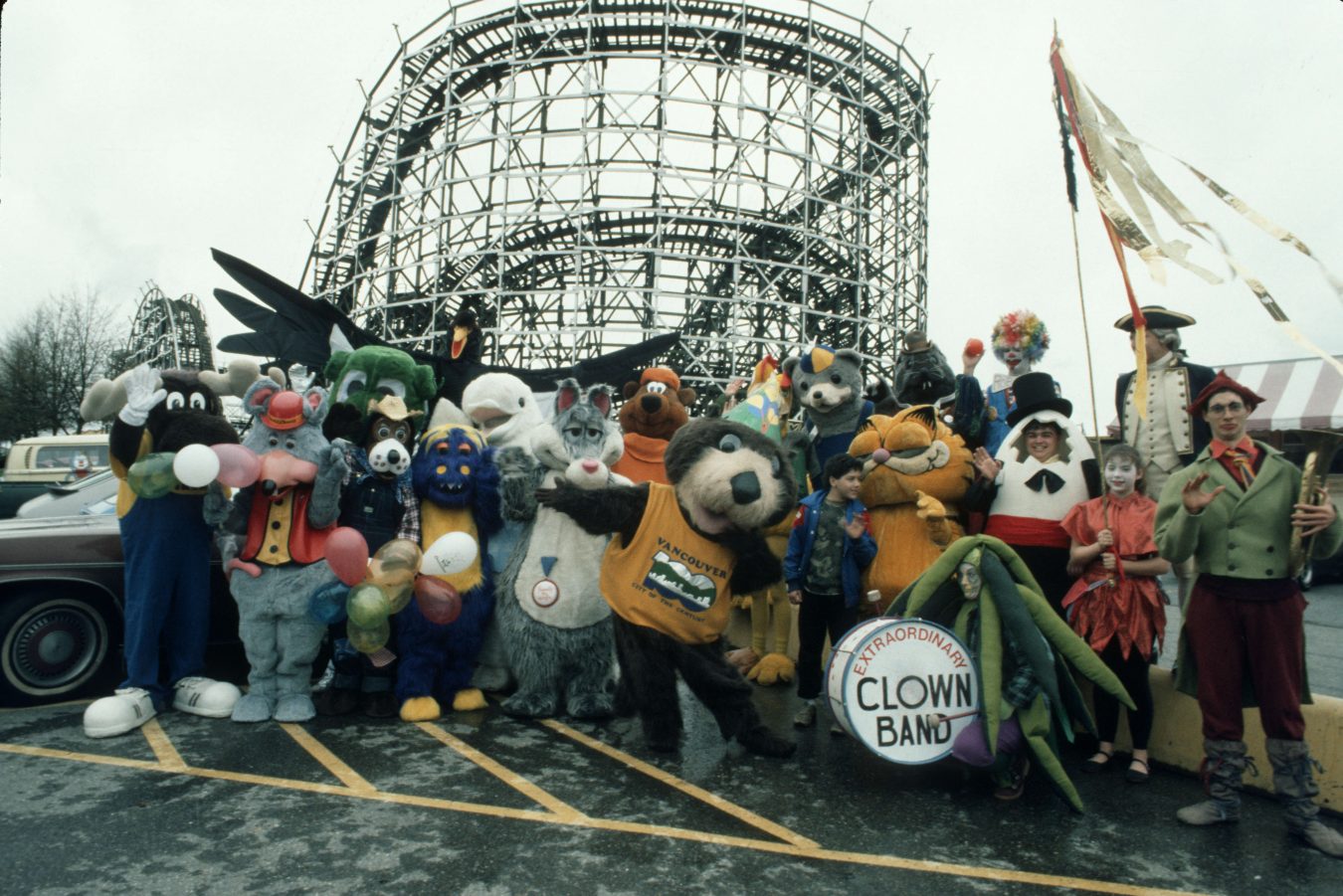 Mascots in front of the Coaster, 1986. Image courtesy of the Vancouver Archives. Image Copyright: COV.

Even though a 120-person petition was later sent to City Hall, the plan was approved by council, and construction began shortly thereafter, with a new Coaster at the top of the list. The effort paid off: Playland’s inaugural year smashed all previous attendance records, bringing in the biggest opening day crowd the fair had ever seen. The Coaster was a particular hit; additional power had to be rerouted to the ride to keep up with the glut of interest.

In the years since, the Coaster has continued to enjoy widespread, and international, popularity. In addition to being the oldest rollercoaster in the country and the only surviving Phare design, it has appeared in movies and TV shows (including Fear and Riding the Bullet), and has been recognized by the American Coaster Enthusiasts in two separate categories. While Phare died in 1962, LeRoy (who lived on the grounds of an amusement park in Oregon) returned to Playland at least once a year for the rest of his life, not only to check on his creation but to ride it.

“I remember one of the last times he came up, he rode it something like 11 times in a row,” Ballance says, laughing. “He was in his nineties at the time. His wife finally got mad at him, because he had rods in his back and she said, ‘He’s not going to be able to walk straight for two weeks after that.’ He always told me it was the greatest achievement of his whole career. And he had worked on some pretty impressive rides, but he held the Playland Coaster very near and dear to his heart.

This article from our archives was originally published on August 17, 2018. Read more from the Community.

One, Two, Three Minimalist Guesthouses on the Coast of Portugal (Pools Included)