September 29, 2019 is the last time the Toronto Blue Jays played a regular season game on their home turf at Rogers Centre. In the 20 months since, they’ve played home games in their minor league ballparks in Buffalo and Dunedin.

As hospitable as those stadiums have been, there’s nothing quite like the atmosphere of a true home ballpark. Just like the Toronto Raptors, the Blue Jays had to make do with an unenviable position of being the sole team in their sport whose home is north of the border.

TD Ballpark in Dunedin and Sahlen Field in Buffalo never originally intended to host regular season MLB games, but the Blue Jays bridged the gap while they figured things out on the fly.

While the players would surely much prefer to play 81 games a season in the comfort of “home,” their temporary home ballparks have favoured the Blue Jays well in the short term.

The team won’t miss certain aspects and amenities of TD Ballpark, but they’ll especially miss how the stadium played in favour of right-handed hitters.

To date, the Blue Jays have played 20 at TD Ballpark in Dunedin, Florida, and while the results for left-handed hitters are about on par from last year’s games in Buffalo, righties have enjoyed a huge boost to their batting averages and slugging percentages.

For right-handed hitters going opposite field, the Blue Jays increased their batting average by 125 points. Even more surprising, they boosted their slugging percentage by 331 points year-over-year.

Coors Field is widely regarded as the best hitters’ ballpark, but TD Ballpark is quickly rivalling Coors Field as the best stadium in baseball for a right-handed hitter. Since 2008, TD Ballpark ranks third overall for the highest ballpark batting average at .276 (only one point behind Sahlen Field at .277).

It’s a fairly small sample size this year at 20 games total, but TD Ballpark ranks second overall in Baseball Savant’s Park Factor metric, second in runs, first in on base percentage, and seventh in home runs.

In terms of slugging percentage, Blue Jays righties at home going opposite field have the second-highest SLG dating back to 2008, second only to the 2020 Yankees.

As mentioned, left-handed hitters are pretty even at home comparing 2021 to 2021. If anything, lefties’ numbers took a dip this season, but that could have been driven by early season struggles by Toronto’s two predominantly lefty hitters: Cavan Biggio and Rowdy Tellez. 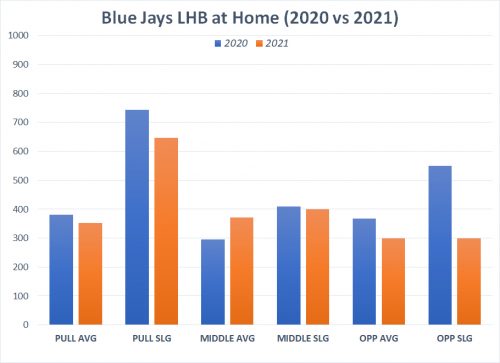 There are several contributing factors to TD Ballpark playing heavily in favour of hitters; it’s only 500 metres from the ocean, there’s the lack of upper deck stands to block the wind in left and right field, and the fact that Dunedin has the second-highest average temperature of any city in MLB in 2021.

The team will move back to Buffalo, New York, to play their home games for the foreseeable future starting on June 1, but Sahlen Field also favours the righties in the Blue Jays’ lineup. Toronto right-handers slashed .280/.334/.490 in Buffalo last year compared to .232/.291/.433 at Rogers Centre in 2019.

The Blue Jays haven’t officially ruled out playing at least some of their games at Rogers Centre this year, but with cross-border travel restrictions still in place, the team faces an uphill battle to play games north of the border in 2021.

It’s a less than ideal situation for the players who haven’t had a steady “home” ballpark in almost two years, but the Blue Jays’ temporary homes have been hitter-friendly havens for right-handed hitters.

Nine Years of DACA Drama, No End in Sight