this summer, from 26 june till 15 september 2021, MAM shanghai presents the first exhibition of zaha hadid architects in mainland china, with a retrospective display of projects over the last 4 decades. ZHA close up at MAM shanghai examines the pioneering research and interconnecting relationships that unite their projects worldwide. founded in 1979 by zaha hadid, zaha hadid architects (ZHA) redefined architecture for the 21st century with a range of projects that have captured imaginations across the globe. furthermore, the exhibition will also present zaha hadid design (ZHD), formed in 2006 out of the need to create a separate platform to share hadid’s distinct dialogue of contemporary design.

‘I am excited to include, as part of our interdisciplinary and immersive approach at MAM, this important exhibition, celebrating zaha hadid’s ingenuity. hadid was an exceptional woman, and we are delighted to show our audience the development of her movement as a researcher, designer, and architect through various geographies and histories—and how this movement impacts the current innovative vision and work of zaha hadid architects, following her untimely passing. zaha hadid architects (ZHA) continues and expands on her legacy and MAM is proud to present this show, granting unprecedented insights into the vision of one of the most important architects of our time,’ stated shai baitel, artistic director of MAM shanghai.

spanning across the globe, ‘from galaxy SOHO’ in china to ‘MAXXI museum’ in italy, below is a series with some of zaha hadid’s most popular projects that continue to fascinate people today.

all images courtesy of hufton+crow, unless stated otherwise

‘galaxy SOHO’ takes shape as a 330,000 sqm commercial icon in the city of beijing, with the white undulating towers to seamlessly merge into the skyline above. the structure is composed of five independent concrete volumes wrapped in insulated aluminum panels and connected by a series of stretched bridges. the first three floors are allocated to retail and entertainment functions, followed by the office clusters stacked on top, and bars, cafes, and restaurants reigning at the highest level, offering panoramic views of the greatest avenues in the city. read more on designboom here.

‘form in motion exhibition’, a retrospective exhibition of the small-scale objects and furniture pieces by zaha hadid design (ZHD) took place in the philadelphia museum of art. made out of polystyrene and vinyl graphics, it immerses visitors in the essence of hadid’s creations as it mirrors the forms and curvatures often found in her work. to expand the height of the building, perspective lines were placed on the ground, giving the illusion of depth and assisting the flow through space. read more on designboom here.

‘one thousand museum’ in the USA 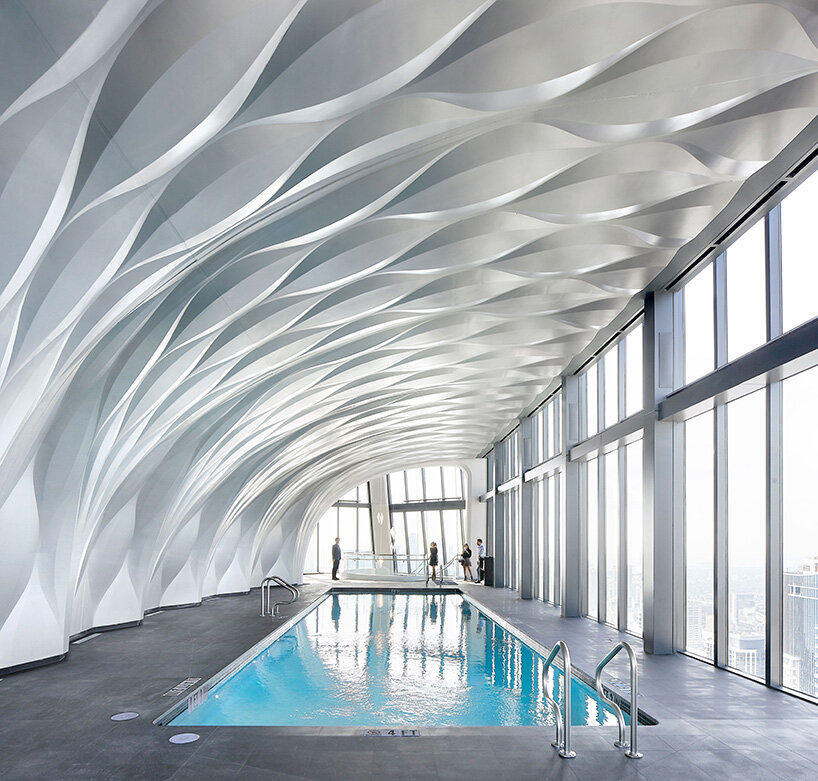 ‘one thousand museum’ is the first and only residential skyscraper in the united states. the structure takes shape as a 62-story tower, with 84 half-and full-floor residences, that houses a wealth of luxury amenities including a multimedia theater, an aquatic center with an indoor pool, and even a private bank vault. read more on designboom here. 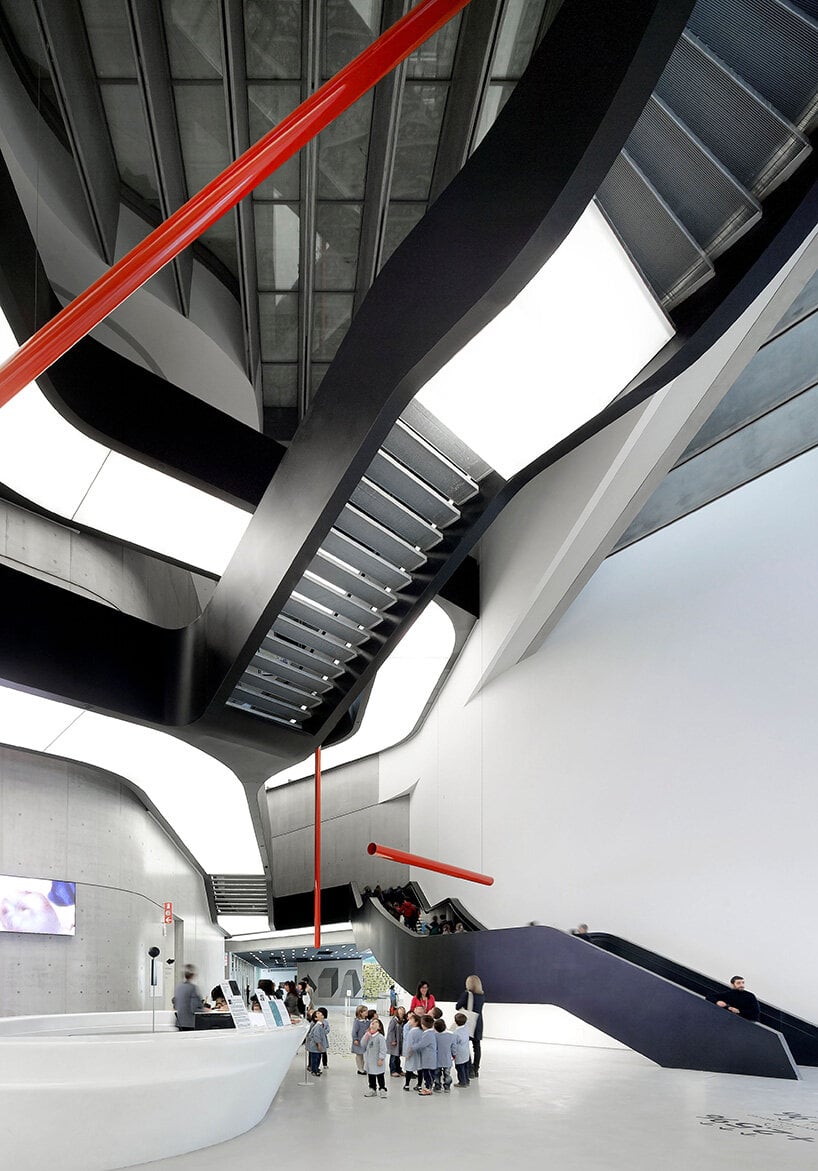 the national museum of XXI century art is located in rome’s flaminio neighborhood and opened in spring 2010. covering over 27,000 sqm the structure has been integrated within the urban fabric of the city, to which it offers a new, articulated, and ‘permeable’ plaza, wrapped by the spectacular forms. materials such as glass, steel, and concrete dominate the interior, providing the exhibition spaces with a neutral appearance, while moveable panels ensure the flexibility of exhibition layouts. read more on designboom here. 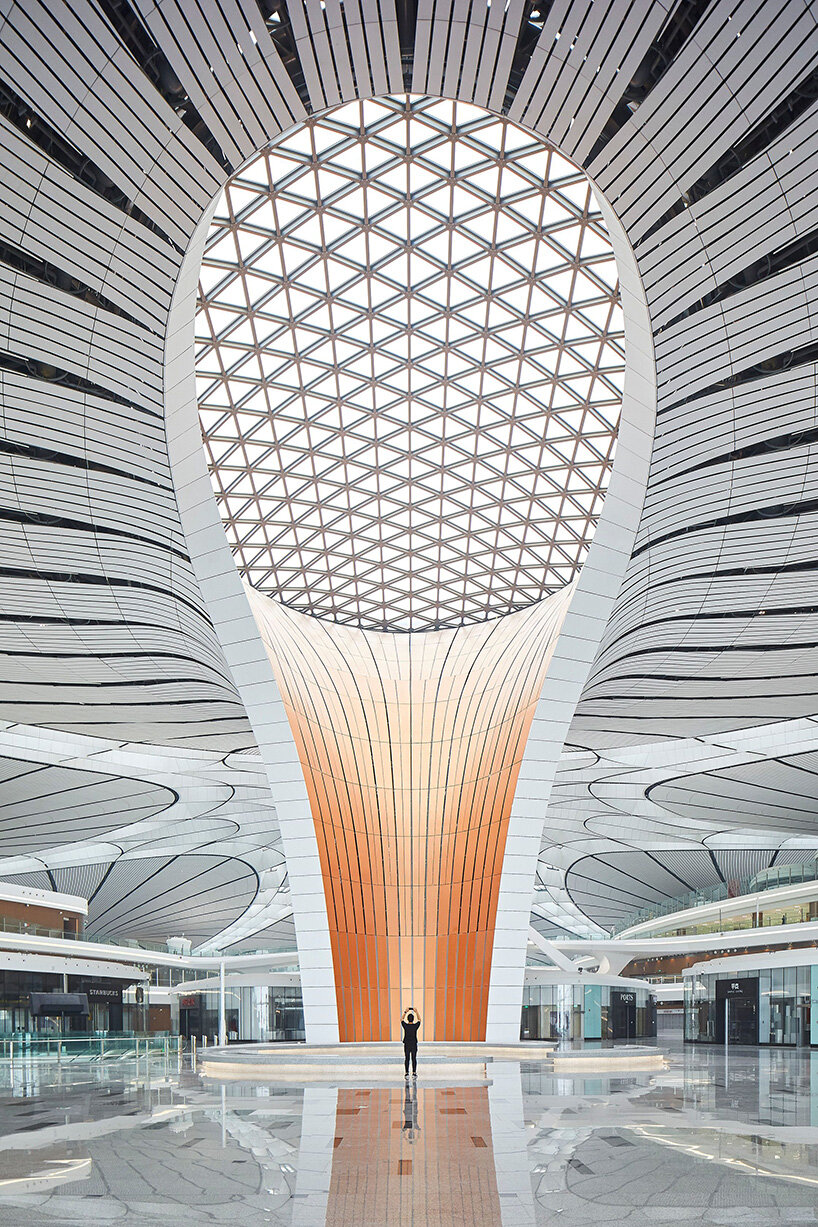 ‘daxing international airport’ in beijing dubbed ‘the starfish’, takes form as a 700,000 sqm structure and is the world’s largest single-building terminal. the terminal’s architecture echoes principles of traditional chinese architecture that organizes interconnected spaces around a central courtyard. its design guides all passengers seamlessly through the relevant zones and towards a grand courtyard at the center, a multi-layered meeting space at the heart of the terminal. read more on designboom here. 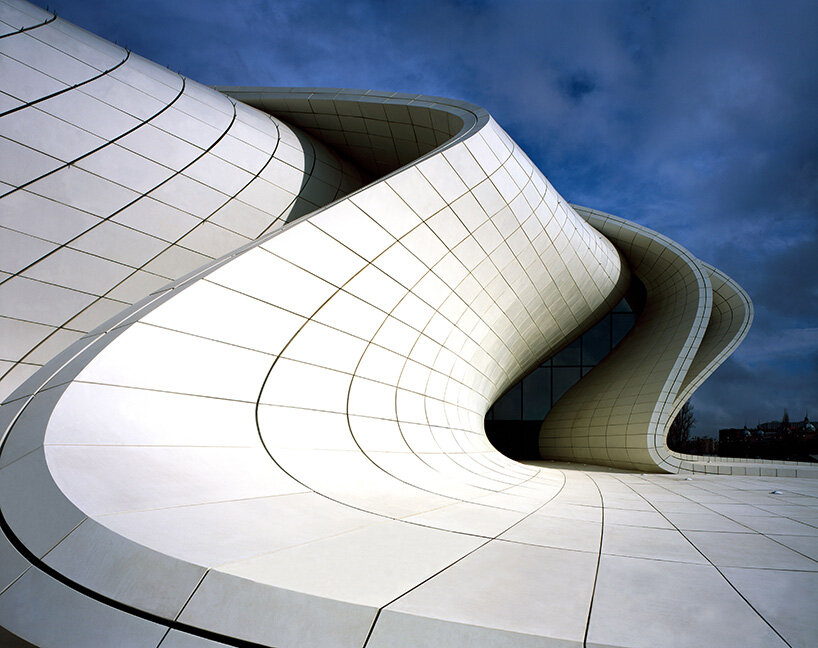 ‘heydar aliyev cultural center’ consists of a museum, library, and conference center in baku. the building has become an important organizing beacon in the landscape, both visually with crisp, white soaring curves and culturally with a steady program of exhibitions and presentations on the history, linguistic complexity, and myriad civilizations that have built azerbaijani culture. read more on designboom here. 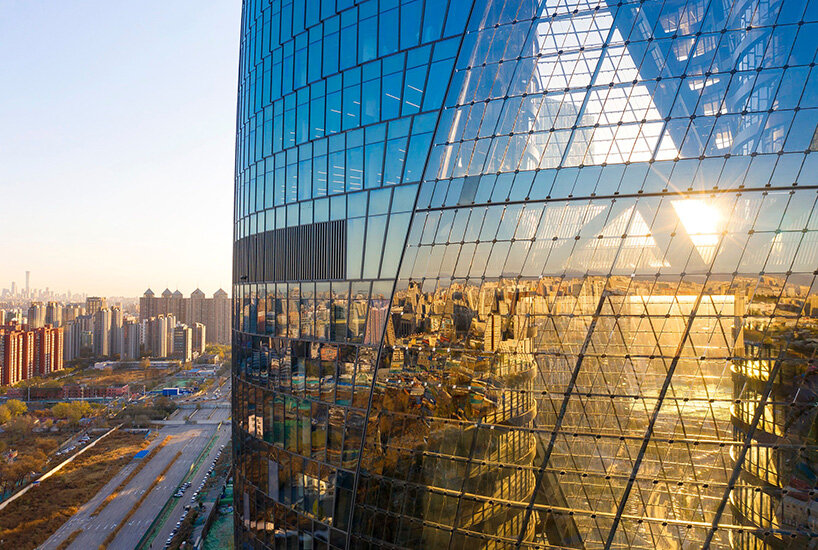 ‘leeza SOHO tower’ takes form as a 45-storey tower with a central atrium, covering 172,800 sqm. the building’s central atrium, the tallest in the world, extends 190 meters through the full height of the structure and functions as a public square for the new business district, linking a number of different spaces and offering sweeping views across its surroundings. the void also brings natural light deep within the building, while simultaneously acting as a thermal chimney with an integrated ventilation system. read more on designboom here. 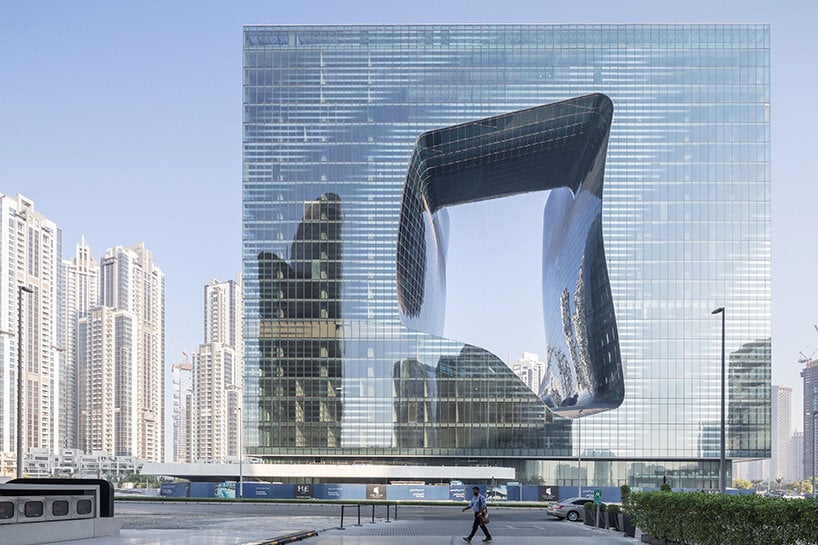 ‘opus’, a unique mixed-use building has been developed as two individual structures, conceived as a single cube formed by a conventional system of slabs stacked vertically, and serviced by central cores. the main feature of the monolithic structure is a free-form void that intersects the block’s outer edges. during the day, the landmark building appears as a solid cube, but at night, the integration of a pixelated glass façade offers a certain degree of reflectivity, appearing dark and dematerialized, the architectural cavern activated with light so that it is visible from a great distance. read more on designboom here. 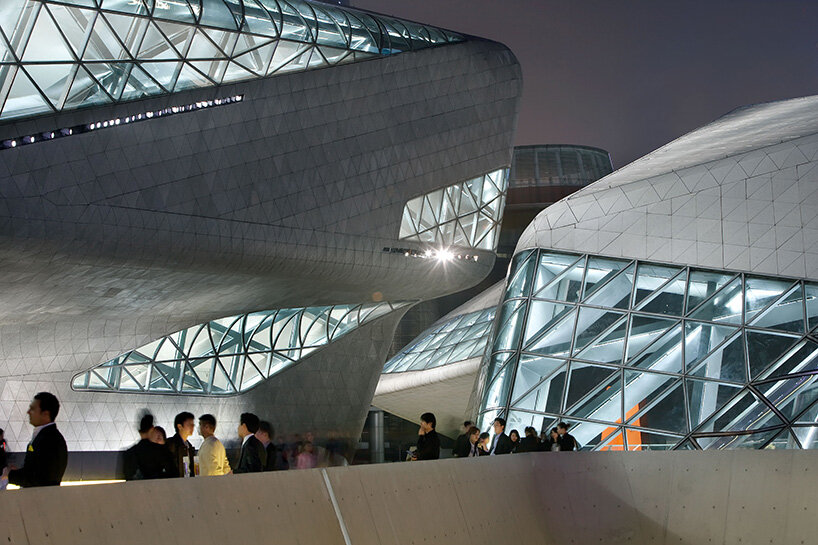 ‘guangzhou opera house’ takes shape as a 70,000 sqm complex featuring two volumes wrapped in a triangulated skin of concrete, glass, and steel. the design serves as an urban and iconic gateway while establishing guangzhou as one of asia’s cultural epicenters. the spine and structural frame of the faceted skin is a dominant element in the interior space: the lobby, entrance, and circulation area interact with the dynamic treatment, moving and guiding the visitors throughout the volume. read more on designboom here. 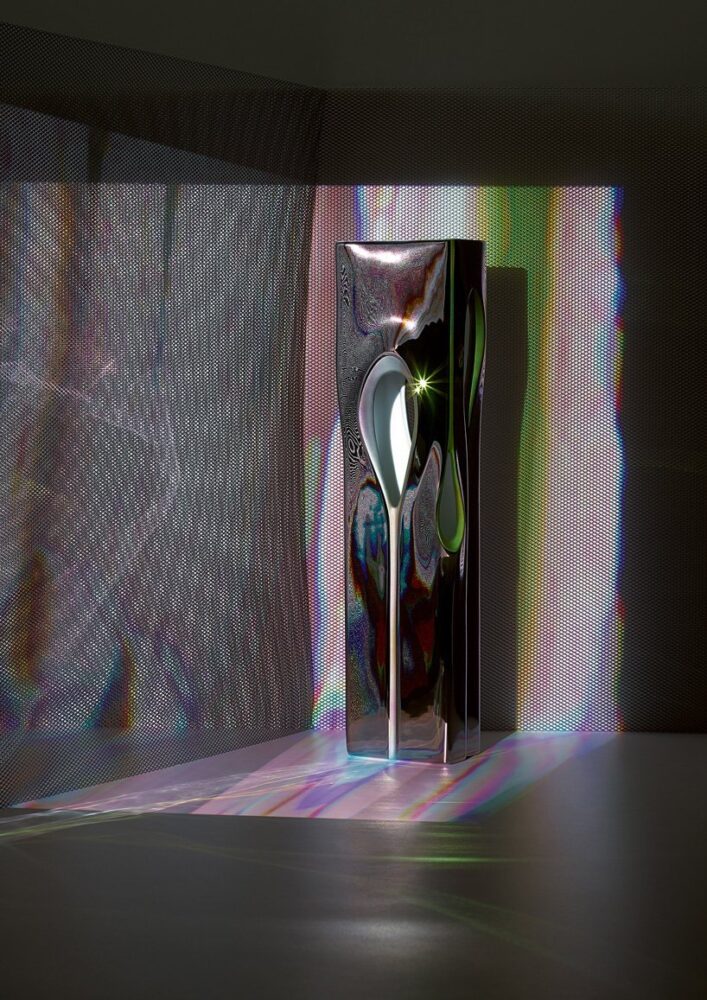 the microflier, a flying microchip that could track pollution and disease

1 new case of COVID-19 in New Brunswick as province prepares to lift restrictions...

What does the CITB do now?