on april 15,2019, a massive blaze devastated the notre-dame cathedral in paris. the fire broke beneath the roof of the 850-year-old church causing its iconic spire, among other elements, to collapse and fall. following french president emmauel macron’s promise to parisians that they will rebuild the cathedral together, many architects took this opportunity to come up with proposals for its restoration but the decision was to go for a literal reconstruction. in his short essay, portuguese architect tomás reis is concerned about the lack of public discussion about this reconstruction. he raises many question regarding environmental impacts, heritage policies and material availability.

‘two years after the fire, notre-dame is set to be rebuilt as it was. the decision was made by the government, no further questions. there are no daring designs on the table, and the cathedral is to be spared to major changes, keeping its image and, of course, the parisian skyline. instead, opting for a literal reconstruction raises new questions. what about the availability of the old materials, nearly one thousand centennial old trees needed to replace the roof and spire structure, in a planet that changed so much in the last eight centuries? such an environmental impact is controversial, as centennial oaks are less abundant today. also, the literal reconstruction infringes one of the most relevant, internationally-recognized heritage policy documents. article 12 of the venice charter points out that ‘replacements of missing parts (…) must be distinguishable from the original so that restoration does not falsify the artistic or historic evidence’. although this discussion raises new questions about the pertinency of mid-twentieth century restoration doctrines, the literal reconstruction ignores the fact that all medieval cathedrals reflect collective identities and evolved in time.’ 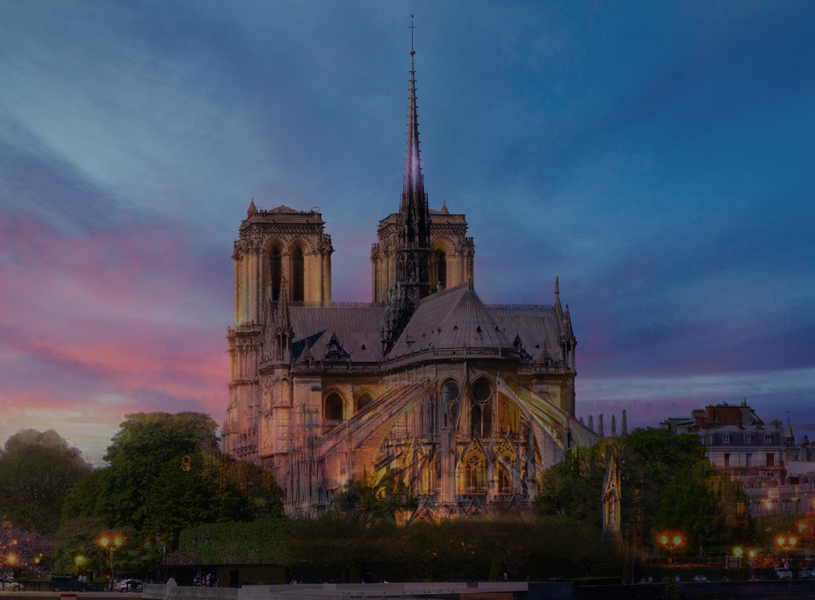 ‘for those who were shocked about the daring architectural concepts, most of them satirical, popping out at social media, it is a relief that the roof will not be glazed and transparent and notre-dame will keep much of its character. yet, without further discussion, a literal reconstruction could be uncritical, without rethinking which building systems can be kept under current circumstances. fortunately, there is detailed information about how the spire was. the level of detail of the reconstruction wouldn’t be affected if slight changes were made. it is clear that a second discussion should be held: how much change is acceptable? no past event left no trace in notre-dame, a building that evolved in time – almost a thousand years. so why not leaving a slight difference? like a slight transparency on the top of the spire, perceivable at dawn or dusk. the new proposal for the spire could include distinguishable materials. if lead and wood are not the best options nowadays, the new structure can be slimmer. the difference can be perceived outside if new finish materials are used, such as smart glass. such surfaces can be electrically controlled to reduce opacity. in other words, the upper part of the spire could exceptionally have translucent areas, whenever needed. whatever choices are made, the reconstruction of notre-dame is an opportunity to strengthen french and european identities. not just the image of the missing parts, but the integrity of a cathedral building with its vast history. it is about the choices of all those people, donors, architects, historians, restorers, researchers, who take part in this unique moment.’

see some of the alternative proposals for the notre dame reconstructions here.

name: notre-dame after the fire

One person dead in head-on crash in North Vancouver

21 Blue Jays players have been injured already this season