In 2019 Sonos launched the Move, a portable Bluetooth speaker with a surprisingly robust sound intended to be carried anywhere in or around the house, including outdoors. But while the Sonos Move’s portability is its primary selling point – with a built-in grip, 11-hour battery life and wireless charging base – how far one might take the Move is dictated and limited by its fairly hefty size and weight. You might venture carrying the Move into the backyard while poolside, gardening or enjoying dinner beneath the stars, but bringing it for outdoor excursions beyond the home isn’t its primary objective. The new Sonos Roam arrives as a smaller and more portable speaker intended to fill-in that gap, extending the range of the Sonos eco-system far beyond the Move’s periphery.

Smaller, lighter and with an IP67 water-and-dust-resistant rating, the Sonos Roam is obviously designed as the sort of device you wouldn’t hesitate to bring along to a picnic, beach, or while camping. At just under a pound, the Roam’s compact 6.61 x 2.44 x 2.36 inch dimensions slide easily into the water bottle sleeve of a backpack, toss into a tote bag, or as we tested, slid into the cup holder of a truck. 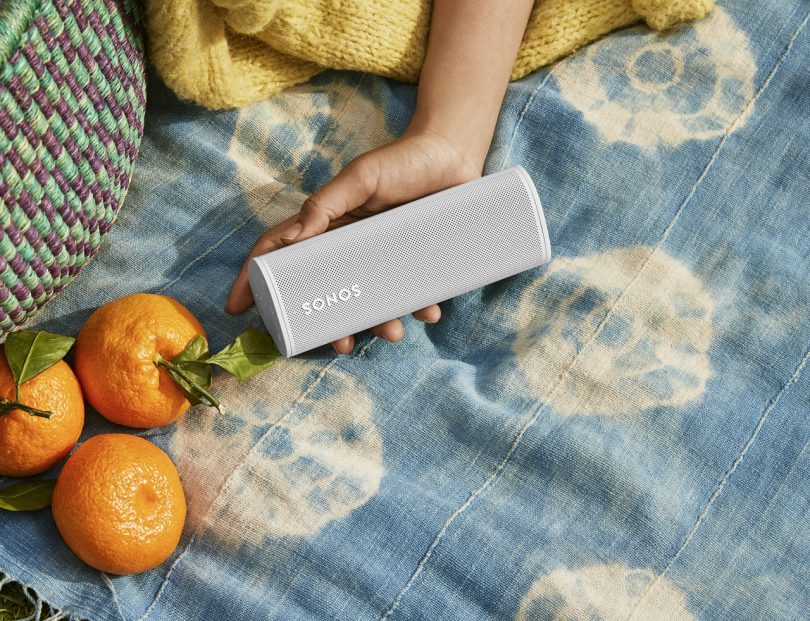 The Roam’s design is sedately executed and aligned with other speakers in the Sonos stable – a subtly triangular tube with a perforated speaker front on one of its three sides and rubberized concave caps on each end. One could almost imagine the Sonos designers taking their Arc sound bar, slicing it into smaller portions, then shaping each piece ever so slightly for a comfortable ergonomic grip (the circumference is significantly much smaller). One length also sports four small feet, cueing users of orientation when placed on its side; the Roam can also function vertically, with one end cap featuring tactile controls. 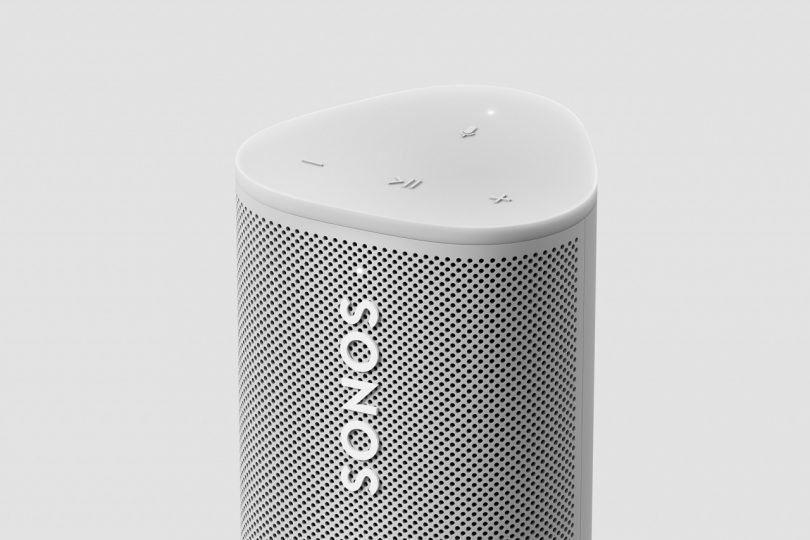 The simplicity of Sonos’ setup process has always been one of the brand’s strongest selling points; we’ve regularly recommended Sonos speakers for anyone who wants very good sound at a reasonable price sans the technicalities and additional hardware required of other multi-speaker solutions. The Roam delivers a slightly surprising twist for anyone used to adding a new member to their Sonos family (but a good one). When we fired up the iOS Sonos app, it gave us the option to use near field communication to add the Roam to our existing stable of speakers. Placing the iPhone in front of the speaker for a moment, and it was almost immediately ready to use. Sure beats the QR code scanning or other hoops some manufacturers require users to jump through during setup. 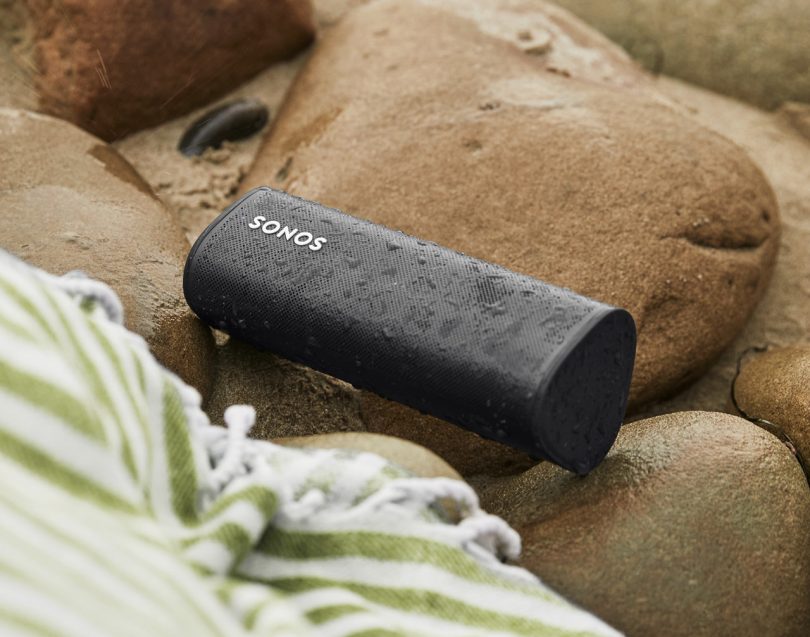 While we primarily charged the Roam using the included USB-C cable, the Roam adds the ability to recharge wirelessly using any Qi charger. Sonos also sells their own optional $49 magnetic wireless charger, but if you’ve already got USB ports and other wireless chargers already in the house, it’s definitely not a necessity. In any case, the Roam can be used for 10 hours of continuous playback on a single charge, with an auto-sleep mode that stretches the battery life for up to 10 days. 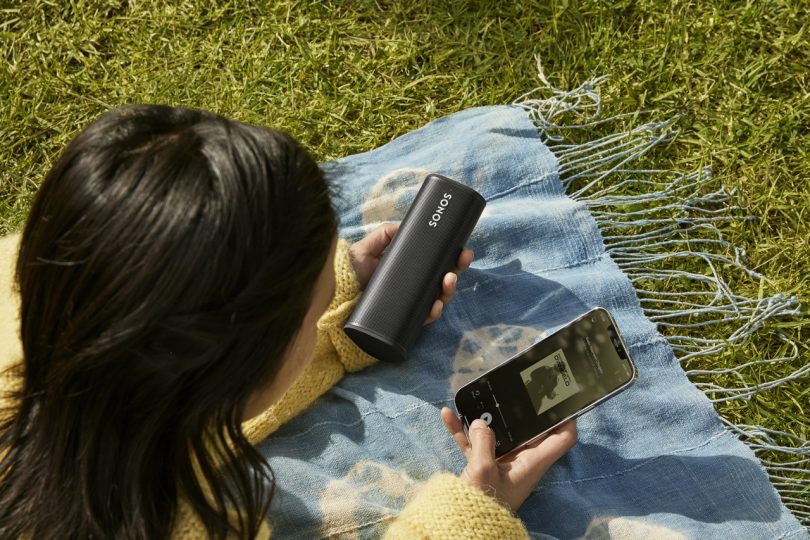 All of these design details would mean zilch if the Roam didn’t deliver in the sound department. Fortunately in our sampling of music ranging from hip-hop, ambient, jazz, indie and rock, the speaker produced distortion-free audio even at the louder end of what we’d want blasting out in public.

Sonos also packed in a microphone array allowing the company’s Trueplay Tuning Technology to adjust the output optimized for the speaker’s orientation, location and content. Depending upon the space the Roam is being used, Trueplay can make a noticeable difference to the ears, and thankfully works its magic automatically when placed into a new environment. 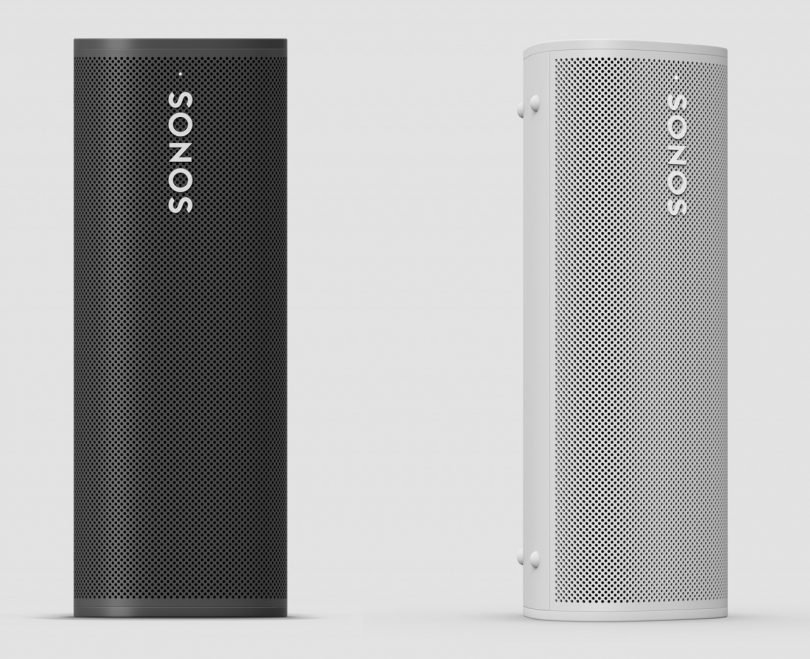 The Roam is available in matte Shadow Black and Lunar White, connects via WiFi network with any 802.11b/g/n/ac 2.4 or 5 GHz broadcast-capable router, and streams using Bluetooth 5.0 or Apple Airplay 2.

Realistically one shouldn’t expect extraordinary low end bass performance from such a compact form, but in cases such as songs where hi-hats and vocals play prominent, the Roam delivers a crisp and clear sound thanks to its dual Class-H amplifiers powering a single tweeter and custom oval-shaped mid-woofer. The bass is there, and we could feel the low end resonate across a table surface, but the presence is more suggestive than undeniable.

All things considered, the Sonos Roam’s reasonable $169 price makes for a compelling piece of portable audio that should appeal to those already invested in the Sonos ecosystem who want to bring that ease-of-user experience out to the wide world (hopefully a possibility for all of us soon). The price and feature should also woo more than a few new users who’ll likely be impressed with Roam’s portability in partnership with confident build quality in comparison to other portable models.

McDonald’s Canada $1 coffee deal is back this month

‘node 1’ is an imagined satellite recycling and manufacturing space station

Canada will not be pressured to release Meng Wanzhou, Trudeau says – National