Susan Mendelson did not invent the Nanaimo bar. That honour, as we have chronicled in this magazine, is lost to history, somewhere in the home kitchens and women’s auxiliaries of the early 20th century. But whenever there’s a crisis involving the authenticity of the legendary Canadian treat, Mendelson is the person everyone wants to talk to.

First there was the great Canadian Nanaimo bar stamp crisis of 2019, when Canada Post published a commemorative stamp featuring the dessert with altogether too much filling and not enough crust. Then, this spring, the opposite disaster struck when The New York Times published a photo of a Nanaimo bar with far too much crust and not enough filling. On a CBC call-in show, outraged Canadians told journalists the same thing: You should really talk to Susan Mendelson.

Today, Mendelson is the co-founder of the Lazy Gourmet, one of Vancouver’s most esteemed and enduring catering companies. But in the early 1970s, when she first baked a Nanaimo bar, she was a 23-year-old social work student putting herself through school baking treats for the Tamahnous Theatre. Mendelson’s treats, including the Nanaimo bar, were a sensation, leading to media attention, a radio show, a flourishing catering career, and a cookbook. Mama Never Cooked Like This became the official cookbook of Expo 86 and thus brought the Nanaimo bar to the world.

MONTECRISTO had the honour of sitting in on a cooking class with Mendelson to set the record straight on how, precisely, a Nanaimo bar is made. Despite the bar’s reputation as a sugary bake-sale treat, Mendelson makes them with care, precision, attention to high-quality ingredients, and, of course, respect for tradition. Canada Post and The New York Times, take note.

(Mendelson notes: Nuts are optional, and at the Lazy Gourmet we leave them out to accommodate allergies. But be sure to use good quality vanilla, like a Madagascar bourbon vanilla, and not the artificial stuff. You can smell the difference.)

(Mendelson notes: Bird’s custard powder is absolutely essential, and its absence is the reason many American versions of the Nanaimo bar taste wrong. If they ever stop making Bird’s Custard, there will be no more Nanaimo bars!)

(Mendelson notes: Don’t waste your ingredients on poor-quality chocolate. For this recipe I use a 55 per cent Callebaut, but you can use anywhere up to a 70 per cent.) 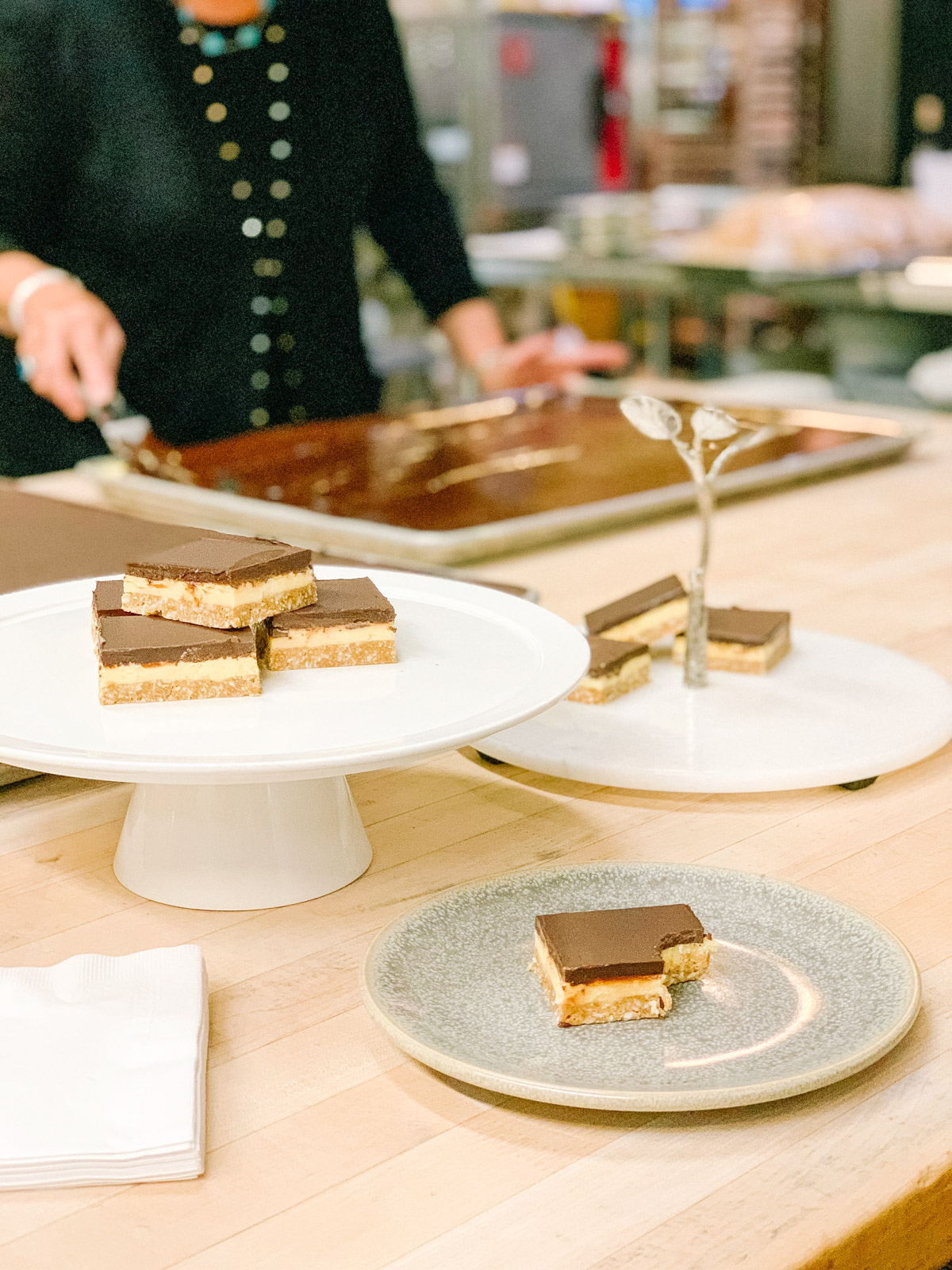 Bring a medium pot of water to a rolling boil. In a heat-safe bowl, use an electric mixer to mix together butter, sugar, egg, vanilla extract, and cocoa powder. Set bowl over boiling water, creating a bain-marie, and stir until mixture thickens slightly.

(Mendelson notes: A trick to prevent the egg from overcooking is to first melt the butter and sugar together in the bain-marie, and then slowly spoon a little of this mixture into the beaten egg and stir to temper. Once tempered, add the egg slowly to the rest of the butter.)

Remove bowl from stove and add graham-wafer crumbs, coconut, and nuts. Pour mixture into the prepared baking pan. Using a spatula, spread mixture evenly to form the base layer of the bars. Let stand at room temperature for 15 minutes.

(Mendelson notes: If you do a lot of baking, a pastry roller will help you achieve a perfectly even crust at this step.)

In a separate bowl, combine ingredients using a whisk or stand-alone mixer until smooth. Pour into the pan and spread evenly over the base layer.

In a small heat-safe bowl, melt chocolate in bain-marie or on a low setting in the microwave. Stir in butter until combined. Carefully spread over the custard layer.

(Mendelson notes: Only use the microwave if you are confident in your timing. Even slightly burning the chocolate will ruin the flavour.)

Refrigerate baking pan until chocolate has hardened. Slice into 20 bars.

After Burning Out On the Job, a B.C. Chef Finds Peace Dissolving the Hierarchies of Food

How to find your next compact track loader

Immigration and the Environment | ImmigrationReform.com