Shay Mitchell isn’t letting the new provincial restrictions on dine-in eating stop her from getting some of Vancouver’s most divine baked goods.

The former Pretty Little Liars actress has recently returned to town, sharing snaps of where she’s visited to get her fix for some of the city’s best eats.

She shared in an Instagram story earlier this week as to where she had her last dine-in meal before the new health orders came into effect.

The star headed to Vij’s on Cambie Street to indulge in some of the best-known Indian food in the area.

And today Mitchell, a longtime fan of Vancouver’s food scene, made a quick trip to Small Victory coffee shop, which is known for its croissants, breads and croissant-doughnut mashups.

She shared an Instagram story showing their bakery case with a croissant doughnut with vanilla — aka a cronut — with the caption “Yup, I got one.”

After grabbing her treat, it looks like Mitchell partook in one of the city’s most popular COVID-friendly outdoor activities: Spotting the famed cherry blossoms in bloom. 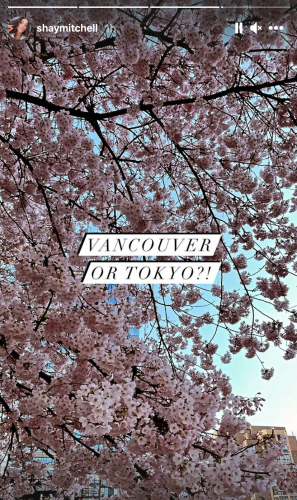 Shay isn’t the only star eating their way around town.  John Cena was just spotted at yet another trendy eatery in the city.

Earlier this week, the former professional wrestler was seen enjoying one of our newest outdoor spaces, the recently-renovated Roof at Black + Blue on Alberni Street.

There are still tons of ways Vancouverites can support our restaurants, bars, and cafes over the next three weeks, including sitting on one of these 100+ patios.

NEW SPACING BOOK: ‘Packaged Toronto’ and the emergence of the city’s design aesthetic