This post presents an update of the economic forecasts generated by the Federal Reserve Bank of New York’s dynamic stochastic general equilibrium (DSGE) model. The model projects solid growth over the next two years, with core inflation slowly rising toward 2 percent. Uncertainty for both output and inflation forecasts remains large.

As usual, we wish to remind our readers that the DSGE model forecast is not an official New York Fed forecast, but only an input to the Research staff’s overall forecasting process. For more information about the model and variables discussed here, see our DSGE model Q & A.

The key driver of the model’s forecast over both the short and the medium runs is the response of the economy to the COVID-19 pandemic. To capture the massive and abrupt macroeconomic effects of the virus, as well as their faster retreat compared to standard business cycle dynamics, the model is augmented with several transitory demand and supply shocks starting in 2020:Q1 (the model description on the GitHub page covers these changes in some detail). Starting in 2020:Q2, the COVID-19 shocks are also partly anticipated one quarter ahead. This anticipation captures the fact that shortly after the onset of the crisis, expectations had adjusted to factor in a persistent pandemic. The standard deviations of these new transitory pandemic shocks are drawn from a relatively uninformative prior distribution, since the decline in economic activity might reflect shortfalls in either supply or demand, or both.

Another key source of uncertainty about the future evolution of the economy concerns the persistence of the effects of the COVID-19 shocks. To capture this uncertainty, we consider two scenarios. In the baseline scenario, the role of standard business cycle shocks during the first half of 2021 is limited. As a result, the decline in activity is mostly explained by the transitory pandemic shocks, leading to a faster rebound. In the alternative scenario, the more persistent standard business cycle shocks are more prominent. The result is a more pessimistic forecast in both the short and medium runs, which captures some of the potentially long-lasting economic scars left by the pandemic. This alternative scenario also features more inflation, since it attributes some of these longer-lasting effects to lower productivity growth. The two scenarios are combined using weights of 70 percent on the baseline and 30 percent on the alternative. This weighting is loosely informed by the average probability distribution of year-over-year real GDP growth in 2021 and 2022 from the Philadelphia Fed Survey of Professional Forecasters (SPF) for February.

Starting in 2020:Q4, we assume that monetary policy follows a new reaction function, average inflation targeting (AIT), reflecting the changes in the FOMC monetary policy strategy announced last August. The parameters of the new rule are such that the policy rate lifts off its effective lower bound (ELB) in 2023, increasing very gradually thereafter. Upon its introduction, we assume that agents’ awareness of the new policy is partial but increasing over time. More specifically, expectations are based on a convex combination of the old and new reaction functions, with the weight on the latter converging to 1 over six years. This modelling approach captures the fact that expectations are likely to adjust only gradually to the introduction of the new policy strategy, especially with the policy rate stuck at the ELB, since agents cannot directly observe its reaction to macroeconomic developments until lift-off.

The March 2021 model forecast is reported in the table below, alongside the one from December 2020, and depicted in the following charts. The model uses quarterly macroeconomic data released through 2020:Q4, augmented for 2021:Q1 with the median forecasts for real GDP growth and core PCE inflation from the February SPF release, as well as the yields on 10-year Treasury securities and Baa corporate bonds based on 2021:Q1 averages up to February 25.


How do the latest forecasts compare with the ones from December? 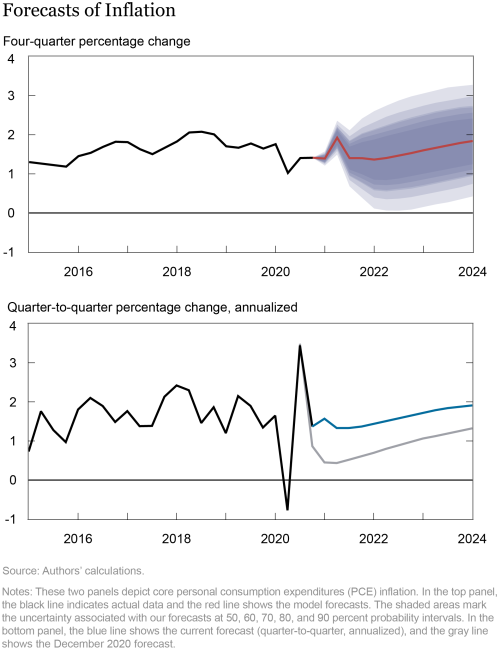 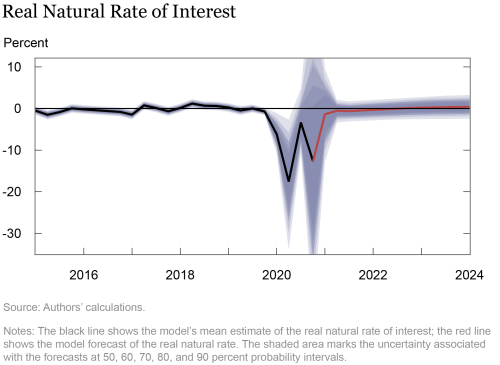 William Chen is a senior research analyst in the Bank’s Research and Statistics Group.

Marco Del Negro is a vice president in the Bank’s Research and Statistics Group.

Shlok Goyal is a senior research analyst in the Bank’s Research and Statistics Group.

Alissa Johnson is a senior research analyst in the Bank’s Research and Statistics Group.

Andrea Tambalotti is a vice president in the Bank’s Research and Statistics Group.

All About Storm Windows – This Old House