Over the past few decades, much of the City of North Vancouver’s placemaking attention has focused on its southern edge, specifically redeveloping the Lonsdale waterfront into The Shipyards.

Now that The Shipyards has been realized and is a success story, there is a fresh idea to provide the northern end of the city with a similarly-scaled placemaking effort that serves a double purpose of improving north-south connectivity.

In an interview with Daily Hive Urbanized, Mayor Linda Buchanan described her vision of building a “land bridge” over Highway 1, where the Lonsdale Avenue interchange is located. This would be a two block-long deck over the freeway to create space for a destination public park on either side of Lonsdale Avenue, with both east and west sides of the park connected by a pedestrian overpass over the street.

Lonsdale Avenue’s span over the freeway would also be overhauled to enable it to become a section of the broader vision for a continuous “Great Street” corridor that improves walking and cycling connections.

Aerial of the existing condition of the area around the Lonsdale Avenue interchange on Highway. (Google Maps) 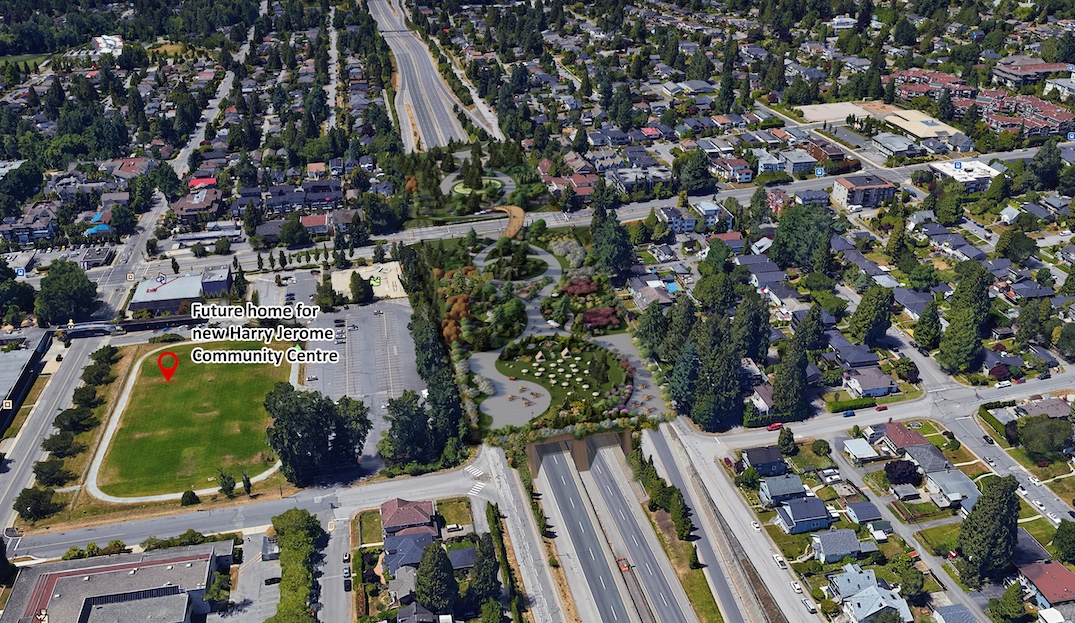 High-level conceptual artistic rendering of what a land bridge public park could look like on the footprint of the Lonsdale Avenue interchange on Highway 1 in North Vancouver. (Linda Buchanan)

“When the Trans Canada Highway came across British Columbia, it literally divided the City of North Vancouver into two, so we have the north side and the south side,” said Buchanan.

“I have my own lived experience, and it keeps coming up when we talk to communities in the north about just how people feel that they’re disconnected from the south side, where the majority of our commercial area is located.”

She says Lonsdale Avenue’s current overpass bridge is widely perceived to be unsafe for pedestrians and cyclists, given its narrow sidewalks, and as a result most people living on the north side currently drive just to get to the south side across the highway.

There are currently just four north-south connections across the highway within the City of North Vancouver’s borders. Three connections are highway interchanges with an overpass or underpass, including Lonsdale Avenue, and the fourth connection is a pedestrian-only bridge near Jones Avenue.

“This is an opportunity to look at our upper side of the city as we start to embark on consultation to look at how people can be actively moving east and west through the city, and how we provide that safe and efficient connections across the highway for north to south movements,” she said.

“It is about creating a complete community, getting people to actively move, and getting them close to the services that they need. It’s a priority for us to be a very walkable city.”

Given that this is currently a very high level concept, Buchanan does not have an estimated construction cost, and it has yet to be proposed to city council to direct city staff to conduct a preliminary analysis. She notes that in her inaugural address as mayor, she highlighted that improving this area would be one of her priorities.

She says the concept is inspired by Gathering Place in Tulsa, Oklahoma, which is a 2018-built public park that includes sections of land bridge decks over a major highway. It had a construction cost of USD$465 million, but at 67 acres it is a far larger footprint than what is envisioned over the Lonsdale Avenue interchange. 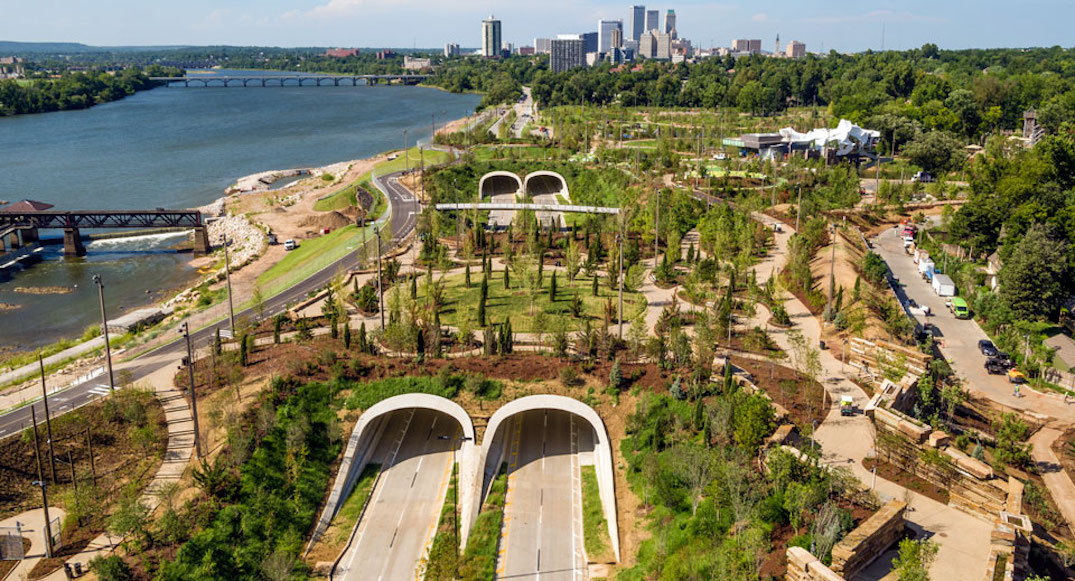 The idea is being brought forward now as the provincial government is conducting studies on the Upper Levels Highway (the local name of Highway 1 through much of the North Shore) and the interchanges. Buchanan wants some dialogue between the municipal and provincial governments on what could be achieved for the highway corridor that improves health and safety, and gets people moving.

“Land is our most expensive commodity. We are a city bound by basically the ocean and another municipality. We don’t have a lot of space, so this is actually creating a large parcel of land for the city as an asset through air space,” she continued.

“I see this as a beautiful way to bookend both ends of the city… [and] to add to our geographical identity to the north that harnesses our commercial street. It’s great for people, it’s great for the environment, and great for the economy.”

Immediately southeast of the Lonsdale Avenue interchange is the future site of the new replacement Harry Jerome Community Centre, which is expected to commence construction in 2022 for an opening in 2025.

The community and recreational centre on the footprint of the entirety of a large city-owned block — currently occupied by Norseman Park, a skate park, Centennial Theatre, and surface parking — will have an ice rink, aquatics centre, fitness space, a gymnasium, and various other uses, including outdoor courts.

City council directed city staff in 2019 to downsize the project in an effort to reduce the financial risk to the municipal government. A revised design and estimated cost will be presented to city council in April 2021.

There are potential placemaking synergies between the land bridge public park over the highway, the new community centre, and the major mixed-use private development by Darwin Properties further to the south. 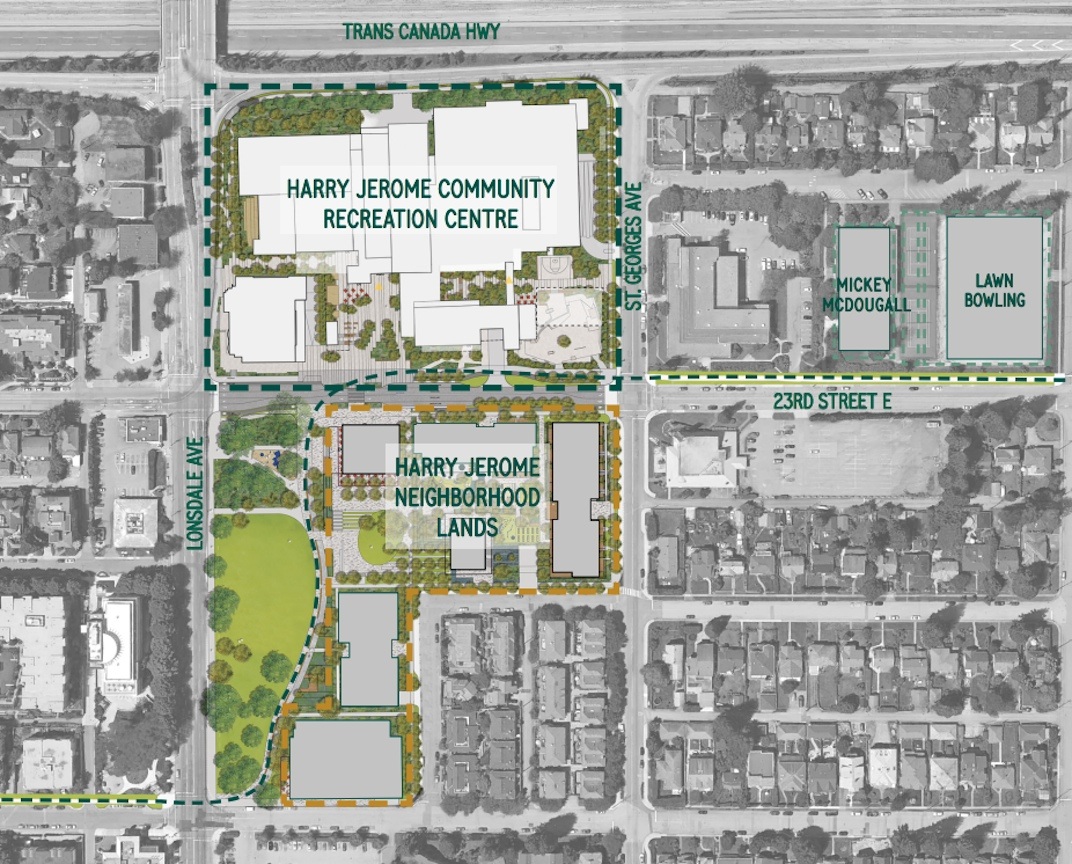 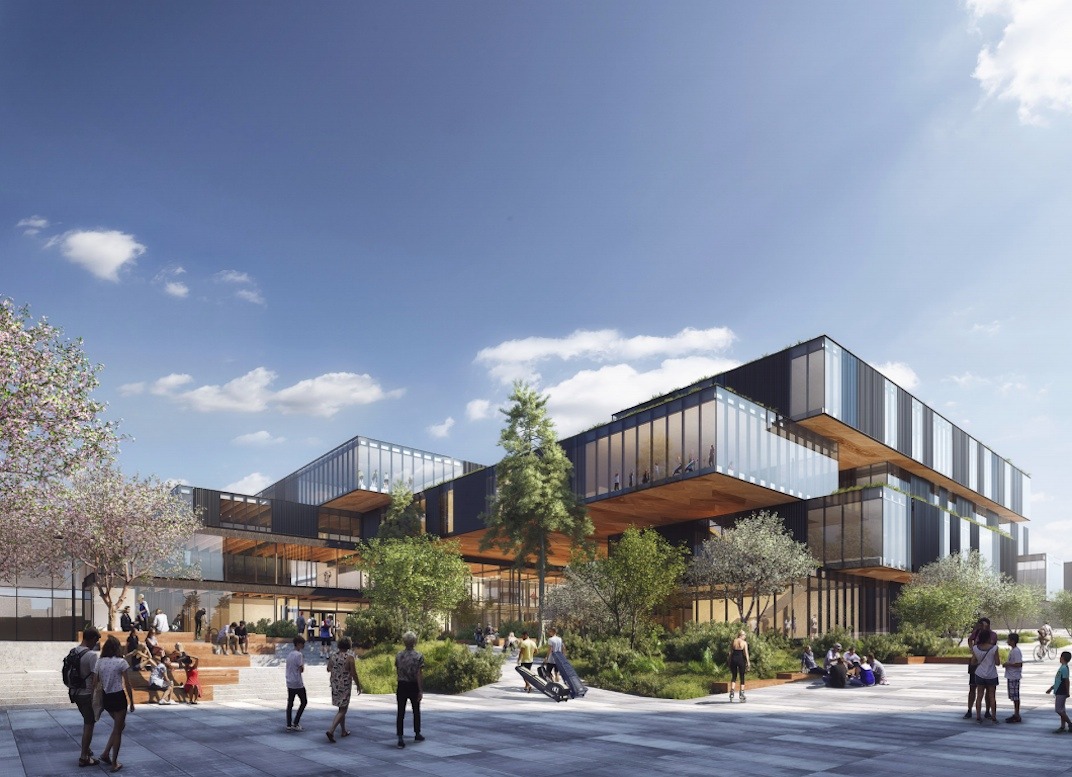 Other examples of land bridges built over highways to create public spaces include the Montlake Project over the SR 520 freeway in Seattle. This project incorporates extensive highway improvements, seismic upgrades, and a “community-connecting highway lid” and transit hub with new walking and cycling paths.

This Seattle project near the University of Washington’s main campus is expected to cost USD$455 million. Construction began in 2019, and completion is scheduled by 2024. 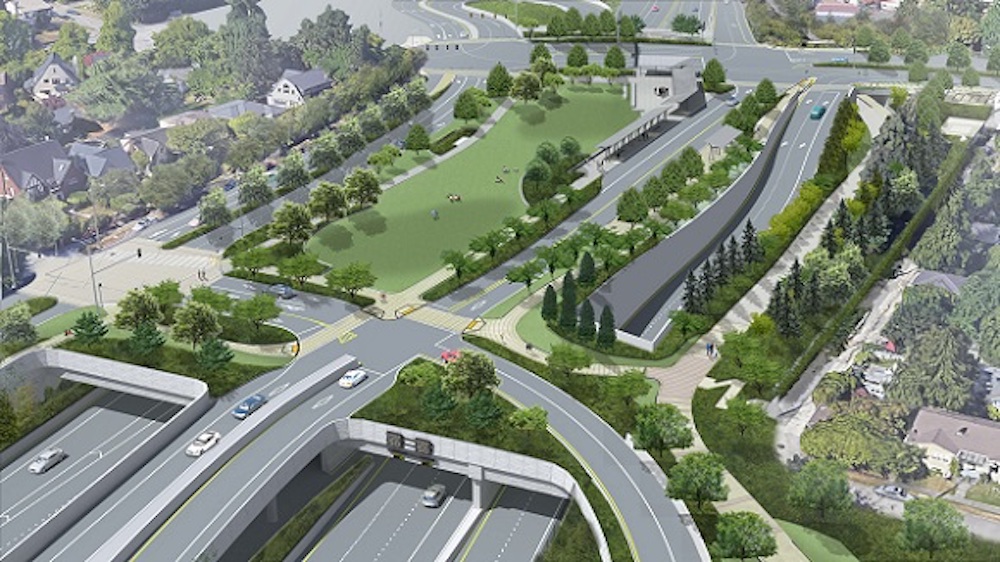 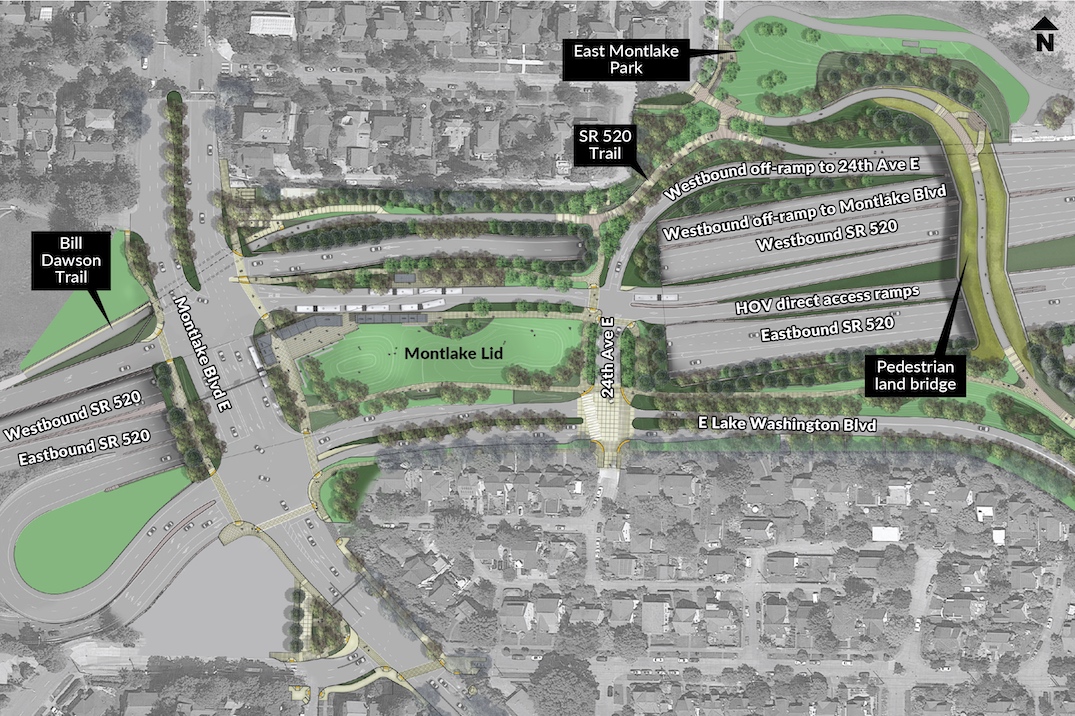 In Toronto, the municipal government is in the planning stages of building a deck over the railyard west of Rogers Centre to create a unique 20-acre public park for the city centre. The project is expected to cost at least $1.7 billion.

Some completed examples include Chicago’s Millennium Park over a major railyard and train station, and Klyde Warren Park over a section of freeway in downtown Dallas. 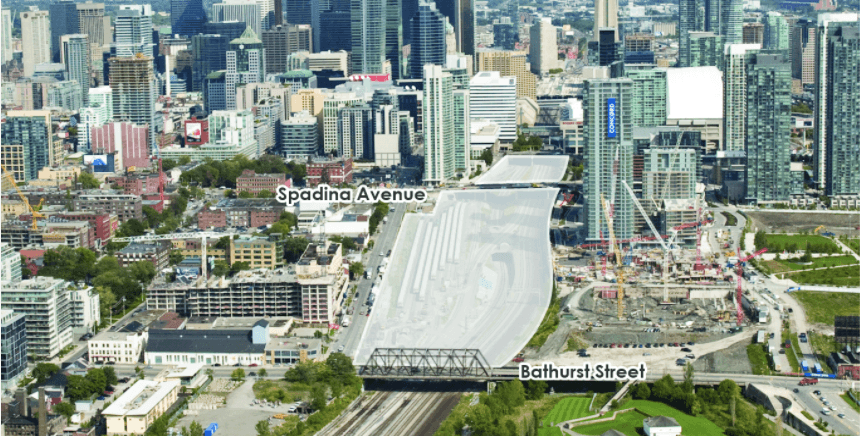 Footprint of the rail deck public park in downtown Toronto. (City of Toronto) 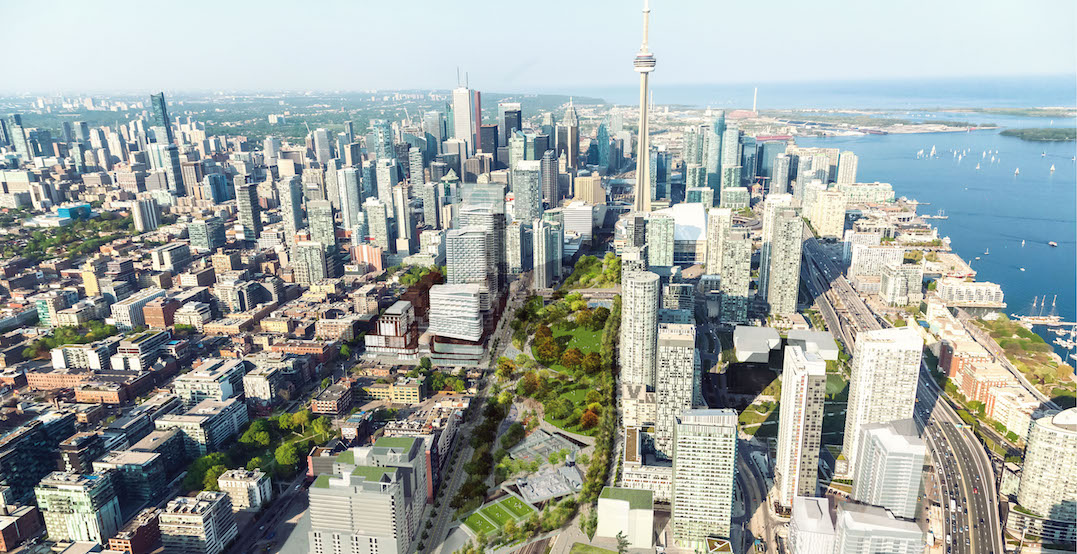 Canucks’ Travis Hamonic in trade-deadline buzz, but he wants to stay

Signs That You’re Paying Too Much For Your Home