The provincial government announced this week it is restarting the master planning process for the sprawling Riverview Hospital lands in southeast Coquitlam.

A “detailed and concrete plan” for the redevelopment of the 244-acre site will be created by BC Housing in partnership with the Kwikwetlem First Nation.

Instead of maintaining a single centralized provincial hospital, most of the facilities at the historic mental health institution were decommissioned in the 1990s and 2000s in favour of a regional and community care approach.

“While the site is being used to provide healing services for people, it has the potential to touch many more lives through delivery of more mental health services, recognition and preservation of natural features, opening safe and affordable housing and developing a complete community,” said David Eby, Attorney General and the BC Minister Responsible for Housing, in a statement.

“We look forward to working with the Kwikwetlem First Nation to create a plan with the community for the site’s future.”

Consultation with the public and stakeholders will be conducted in 2021 for the development of the plan, and the First Nation will also engage their own members on what they would like to see.

BC Housing previously conducted extensive public consultation between 2013 and 2015 to create key principles and themes for the future redevelopment, but that work did not lead to a detailed master plan outlining aspects such as land uses, housing options, urban design, density, height, public spaces, transportation infrastructure, and utilities.

The provincial government says it will “honour the core themes” of the previous visioning process for the new master planning process.

Riverview Hospital entails about 75 buildings as old as a century, with a combined total floor area of 1.65 million sq ft. As well, there are extensive green spaces, natural areas, ravines, and watercourses. 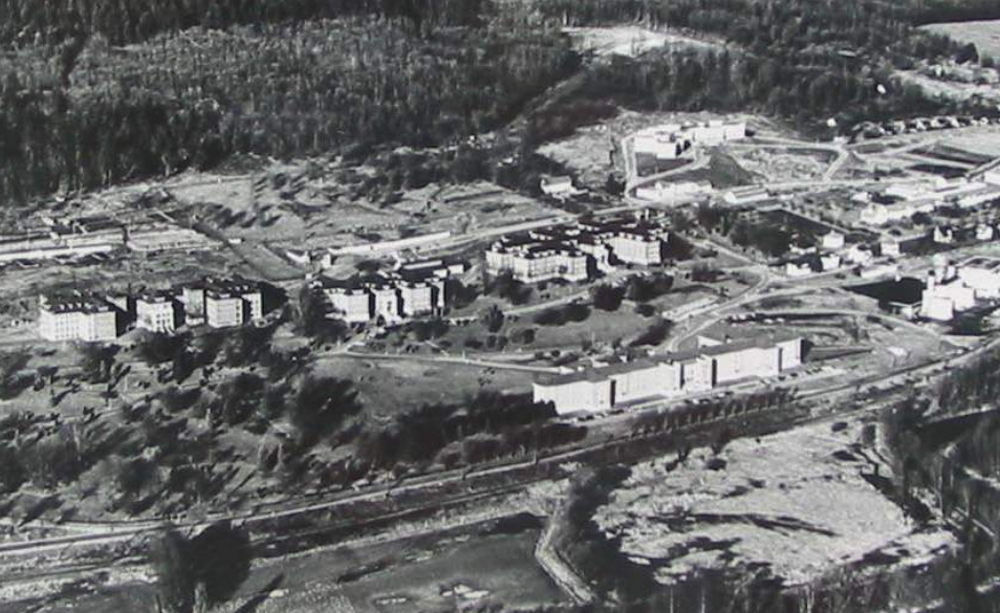 BC Housing’s visioning document for the redevelopment states the establishment of contemporary mental health and support services is a cornerstone for the project. A master plan would also be required to identify existing structures with heritage value for preservation and possible reuse.

The mental health treatment facilities are to be contained within the site’s evolution into a highly mixed-use district — a “complete community” — with employment opportunities and a range of housing options, including both market strata homes and affordable rental homes.

There is a equally great emphasis on the development of market strata housing, which will provide revenue to enable a 100% recovery of the construction costs for the restoration of heritage buildings, infrastructure upgrades, preservation of natural areas and open spaces, and community amenities.

This “break-even mandate” for the redevelopment does not include the requirement to generate revenue for the First Nation, who have “expressed a desire to see the land used to its maximum potential and to ensure the Nation benefits through employment and ownership opportunities.”

The visioning document also suggested potential employment opportunities for those with mental illness, the possibility of setting aside space for academic institutions, and the potential enhancement of the site’s filming opportunities, given that the lands are one of the most frequently used set locations for film and television productions in BC. 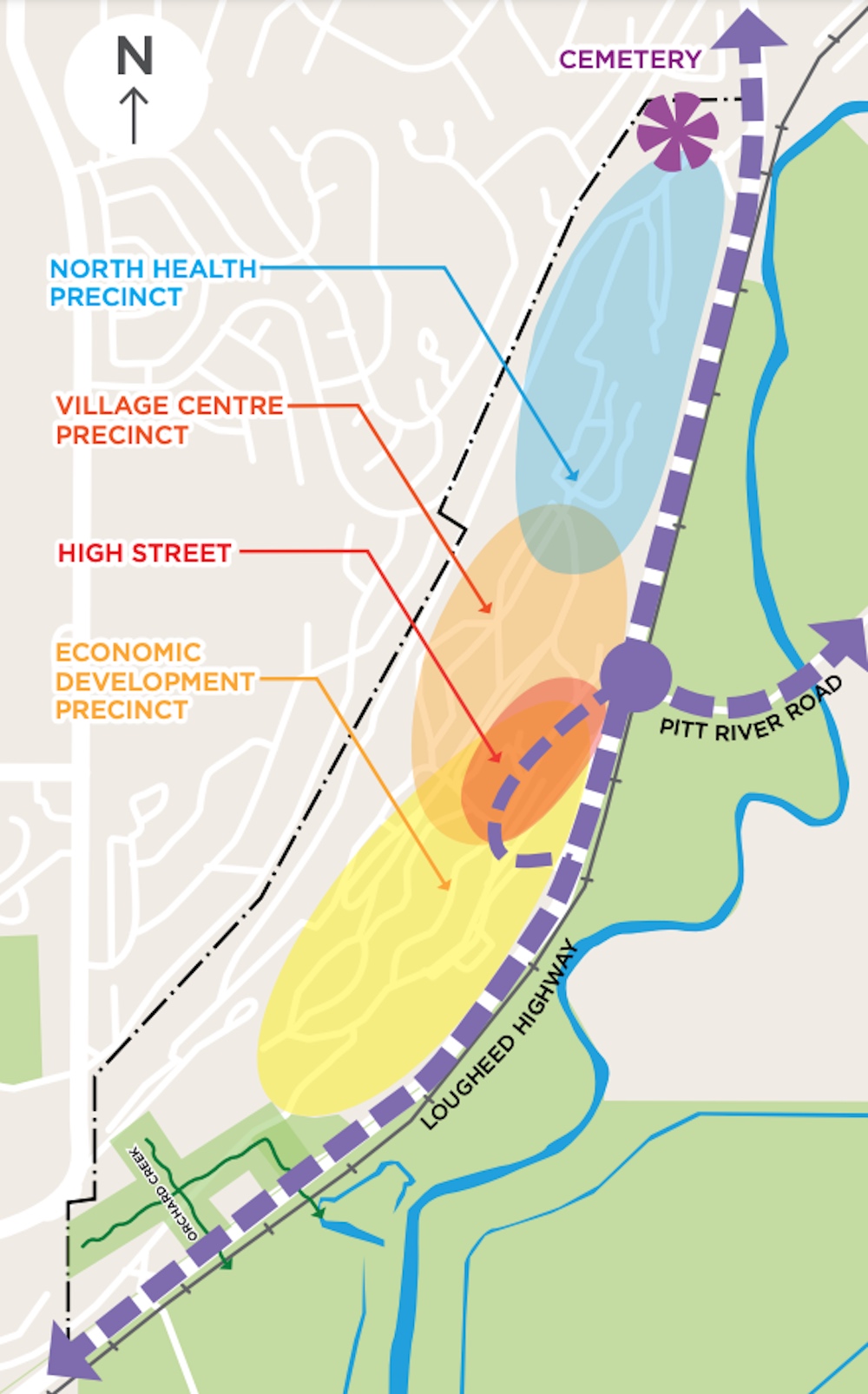 The previous high-level concept envisioned healthcare uses for the northern end of the site, a village centre near the intersection of Lougheed Highway and Pitt River Road, and an “economic development precinct” to the south of the core.

A minor mental health facility with 38 beds for teenagers opened at the Riverview site in 2019. In Summer 2021, the new purpose-built $101-million Red Fish Healing Centre for Mental Health and Addictions will open at the hospital lands, providing 105 beds. However, both facilities are largely a relocation of existing capacity previously located at the Willingdon Lands in Burnaby, which is slated for redevelopment as well.

Approximately 15 year s ago, TransLink considered an Evergreen Line LRT route that ran through the area following Lougheed Highway, partially for the transit-oriented redevelopment potential of the Riverview Hospital lands. 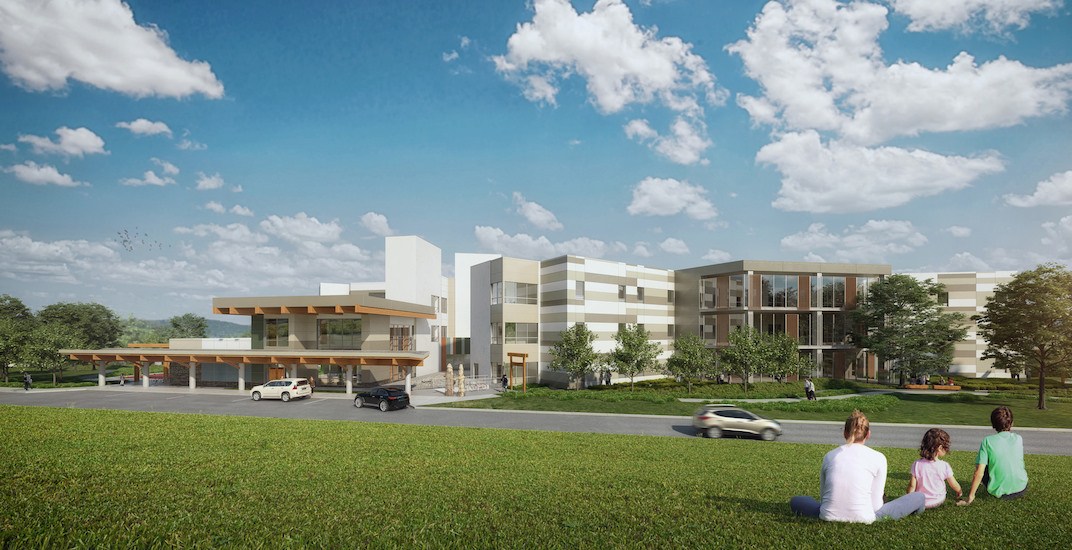 Artistic rendering of the new mental health and addiction illness facility at the Riverview Hospital lands in Coquitlam. (Government of BC)

designboom previews national pavilions to look out for

COVID-19 update for July 21: Here’s the latest on coronavirus in B.C.