As an eighth-generation Italian butcher, Dario Cecchini has earned a global reputation for grilling great slabs of meat to perfection. From his modest restaurant and butcher shop in Panzano, Cecchini has redefined the bistecca Fiorentina. We previously visited him on his home turf at Antica Macelleria Cecchini for a glimpse of his famous grills. Now, in this story from our archives, the grillmaster comes to us, two-inch thick Porterhouses in hand and a shout of “Carne!” on his lips, to share the secrets of his unseasoned steak for one night at Nightingale.

You can still hear it ringing out a couple of days after the fact. “Carne!” shouts the iconic Dario Cecchini, eighth generation butcher, self-trained grillmaster, the uncontested king of Bistecca Fiorentina. He does this daily at his restaurant in Panzano, Italy, just outside Florence, called Antica Macelleria Cecchini. And tonight, he is doing it at Nightingale in Vancouver.

He stands at the rail on the upstairs floor of the restaurant, shouting down at the assembled guests below, sipping on their prosecco. Castello di Albola wines is serving several of their lovely Chiantis with the meal, and the sparkling wine for the reception, but the real anticipation is for the spectacle that is about to unfold. Cecchini holds two giant, two-inch thick porterhouse steaks, one in each hand and, raising them to the heavens, he then retreats to the carcass (more than half a cow) purchased for this dinner, and expertly cleaves out two epic Tomahawk steaks, and repeats his process. “Carne!”

Dario Cecchini at Nightingale in Vancouver.

Accompanied by AC/DC’s “Hells Bells” blaring from loudspeakers, he parades the steaks around the dining room, and enters the open kitchen where the grills and a specially installed charcoal barbecue pit are in full flame. The heat is intense, and some of the chefs wear tinted goggles as protection from smoke and spark. Nightingale head chef Phil Scarfone studiously oversees the meat hitting the grills. Executive chef David Hawksworth, this evening a spectator and diner, marvels at the sheer volume of steaks stacked all over the kitchen counters.

In a much quieter moment, earlier in the day, over espresso and glasses of water, Cecchini explains his notion of cucina primitivo. “Tuscan comes from Etruscan. The cooking goes very far back, almost Palaeolithic, and it is simple cooking. But the simplest things are always the hardest to get just right. Meat, unseasoned. On the table, raw vegetables, good olive oil, and salt we make ourselves. That is what our restaurant does.” They never tell customers the meat is unseasoned, though. They let each individual decide for themselves if they want or need seasoning, though most times they do not.

The meat is not the famous Chianina beef (well, about one percent is, and Cecchini is working with a small rancher to bring that breed back), but it is local, sustainable, and, depending on the cut, aged anywhere from 10 to 35 days. 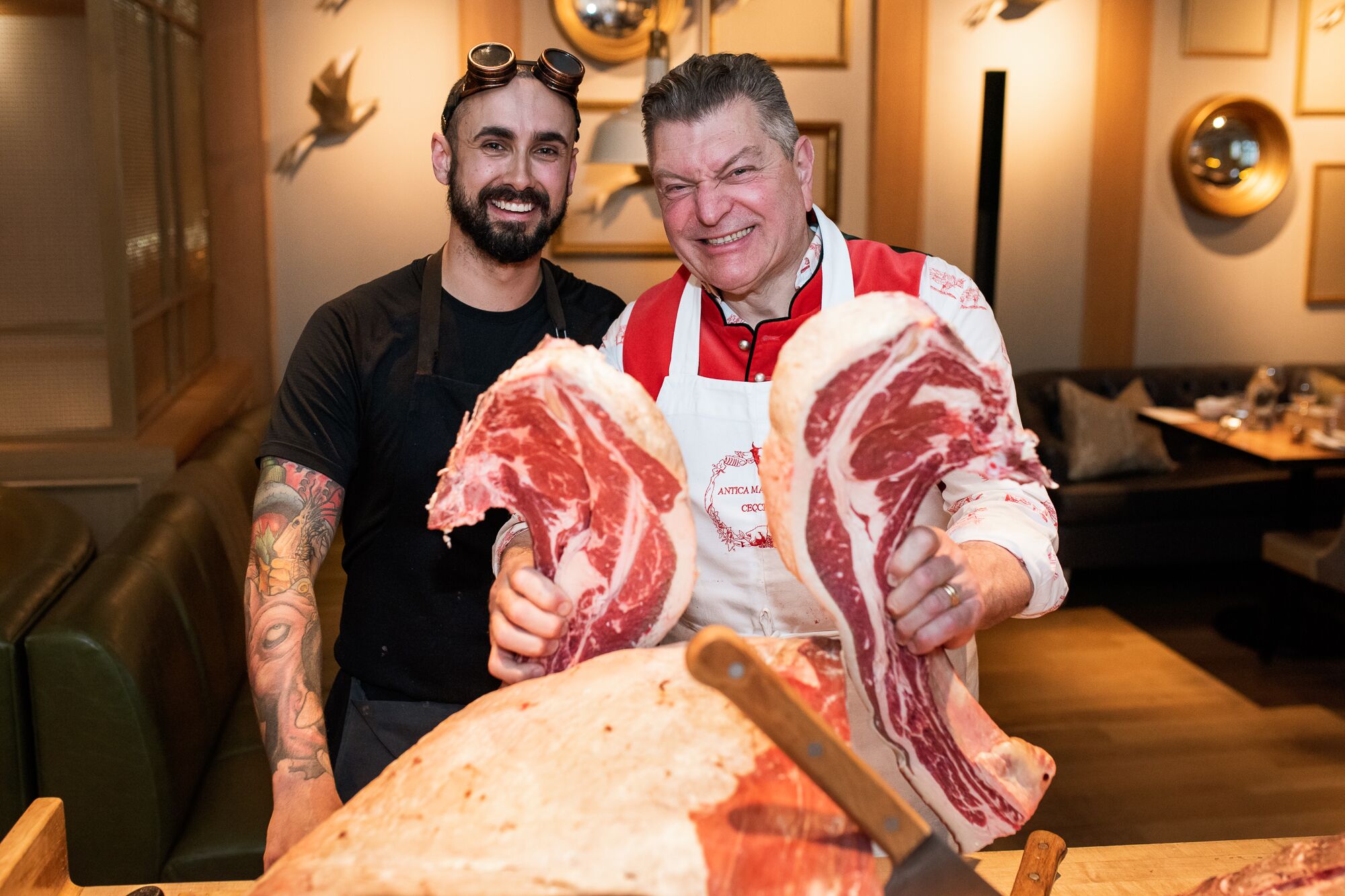 At the Macelleria in Panzano, it feels like a mecca of sorts, and the place is always full. The inside is quite small, perhaps 20 tables, but it’s the outside patio, with its two very long indeed tables, where all the action takes place. At Nightingale, the force of Cecchini’s personality and the heat, smoke and aromas of huge pieces or grilling meat approach what happens back in Italy.

For this occasion, a few extras are on the menu, though the raw vegetables, oil, and special salt are there. Some crostini are on offer, alongside a truly delicious “True” beef broth.  A warm beef salad with abundant rosemary is served, and then the main attraction, magnificent portions of carved Bistecca Fiorentina. Enough bones to satisfy all who want one. The meat is charred nicely on the outside, and the pieces range from rare to medium rare, with some Tuscan cannellini beans alongside, and that’s it. A braised beef and baked potato dish follows, and then a nice olive oil cake. Espresso if you need it. All the Castello di Albola wines show well with their matched dishes, but a special shout out is in order for the Chianti Classico Gran Selezione Santa Caterina 2015, and the amazing Acciaiolo 2015. Wines well worth searching out. 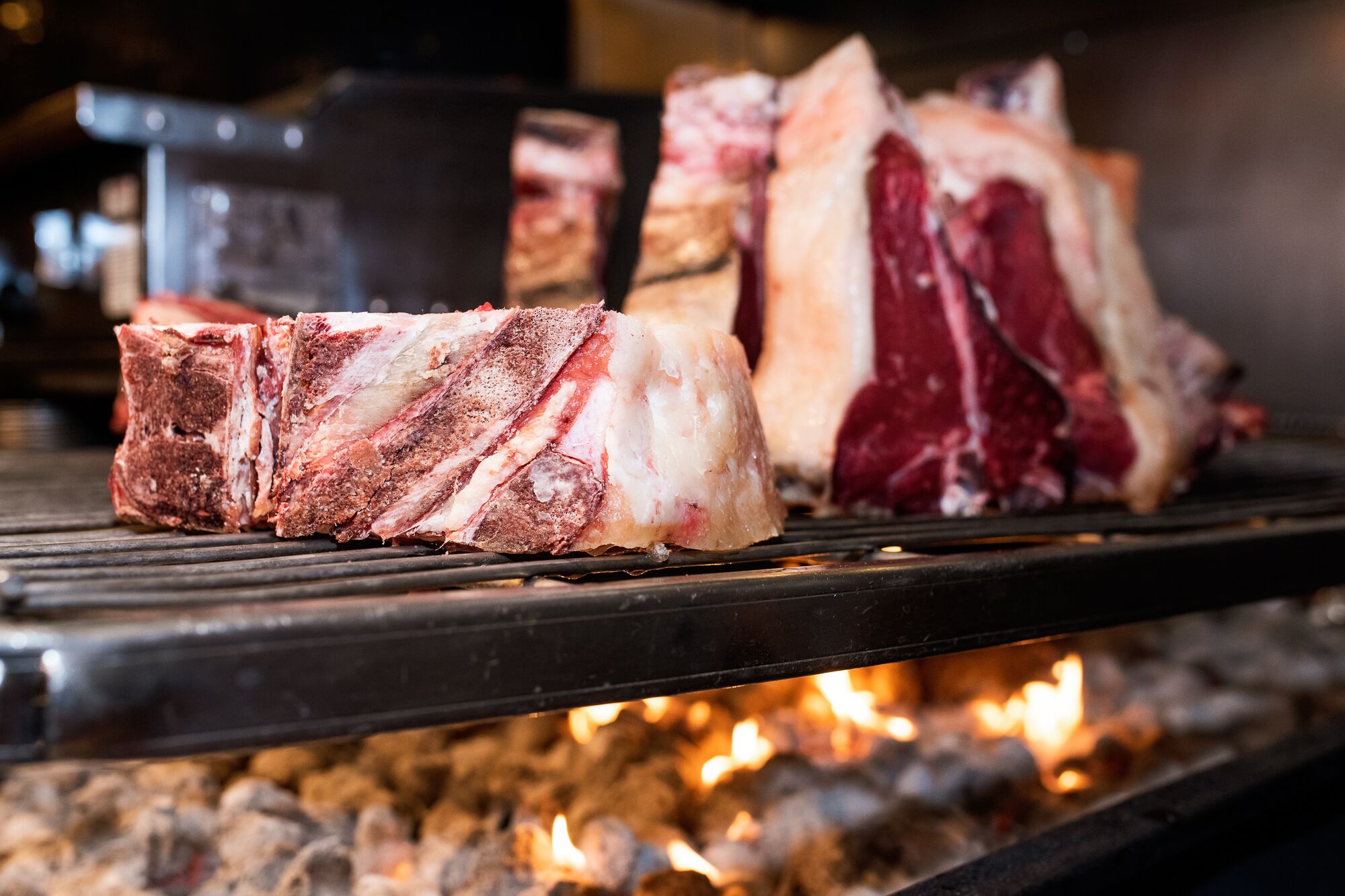 Bidding goodbye to Dario Cecchini is difficult, in part because he is so energetic and passionate. He said earlier that he finds many places in the world where the beef is excellent. There is no such thing as a favourite, since great beef from any region speaks to that region. He is very happy with the Cache Creek Farms steaks he cooked tonight, saying, “We share life, we share the earth, with these animals. Ranchers who know the spirit of the animals, and cooking this well, is respect, for all.”

This article from our archives was originally published on April 18, 2019. Read more local Food and Drink stories.

How to File Taxes for Side Gig Work