Bikes on their dedicated roadway space in Stanley Park will be back on the table for discussion again in the next Vancouver Park Board meeting on Monday, March 8.

A motion by Green Party commissioner Camil Dumont calls for the return of the temporary bike lane that occupies one of the two traffic lanes of Stanley Park Drive.

Dumont wants to have the bike lane reactivated “as soon as operationally reasonable” until the end of October 2021.

Park Board staff are also being asked to consult with stakeholders — such as restaurant businesses and the Vancouver Aquarium — and consult with the city’s advisory committees, including the Seniors Advisory Committee and the Persons with Disabilities Advisory Community.

It is expected that learnings from the changes that altered Stanley Park’s road system last year will result in the implementation of improvements and “innovations.”

The controversial bike lane was a sticking point for several park businesses after their parking lots were significantly reduced or completely blocked off for the bike lane. Parking was particularly affected for far-flung destinations such as Brockton Point, the northeast shoreline near Pipeline Road, Prospect Point, and Third Beach. Parking was also significantly reduced at Second Beach.

Based on the findings of a Park Board survey at the end of Summer 2020, about 28% of respondents did not visit the park after the onset of COVID-19, largely because they could not drive through the park.

The survey found that more people visited the park when it partially reopened to vehicles in June 2020, compared to when it was fully closed to vehicles from the period starting in early April 2020, which was an immediate pandemic measure to encourage physical distancing. Cyclists were banned from using the seawall to provide pedestrians with more space.

Just under half of respondents (47%) said the park was “better” with separated lanes for vehicles and cyclists compared to the configuration before the pandemic.

Conversely, 31% said the bike lane made the park “worse” for reasons of not being able to bike on the seawall, not being able to access all locations driving, inability to find parking, and being stuck behind the carriage when Stanley Park Horse-Drawn Tours resumed operations on the single lane for vehicles. 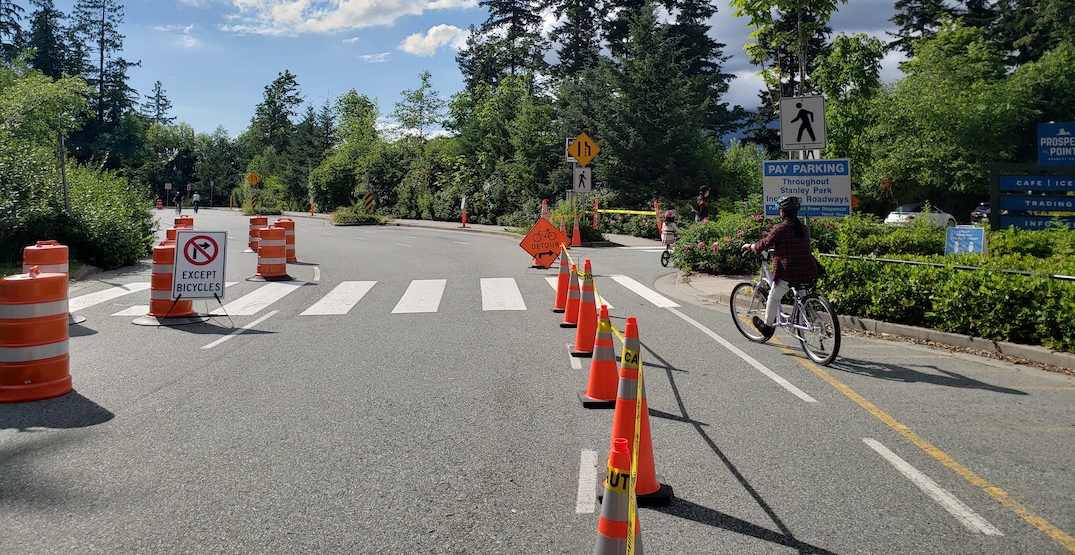 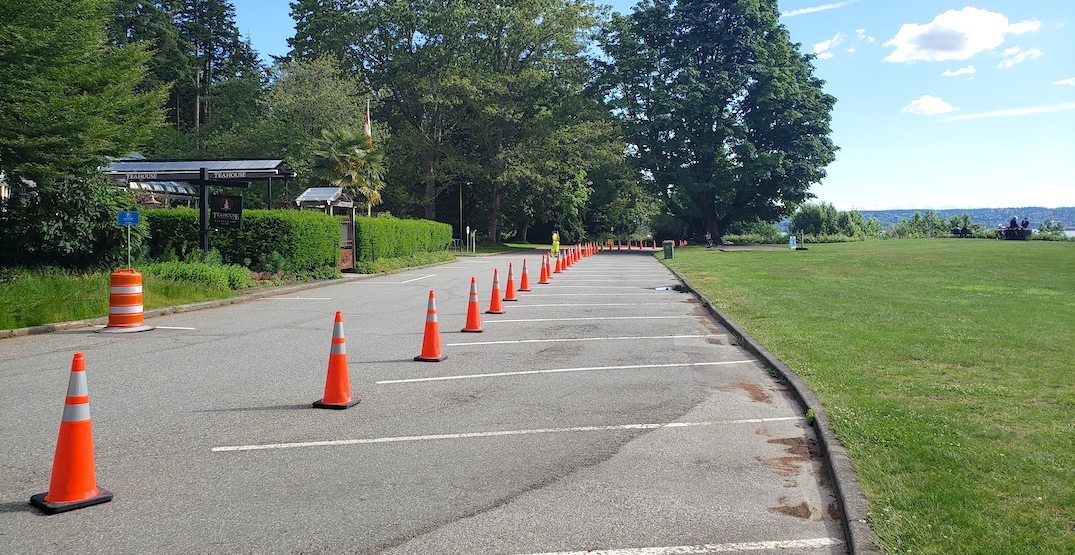 Bike lane through the parking lot of The Teahouse. (Kenneth Chan/Daily Hive)

The temporary bike lane on Stanley Park Drive was dismantled at the end of September 2020, when the cones and barriers were removed.

In June 2020, Park Board commissioners also directed staff to conduct a study on exploring longer term options to reduce vehicle traffic in the park. A staff report outlining the permanent options is expected to return to the elected body later this year and in 2022 for further decisions.

Just beyond the Park Board’s jurisdiction, an on-road bike lane along Beach Avenue between Park Lane and Hornby Street — reaching Stanley Park Drive and North Lost Lagoon Drive — has completely closed the eastbound direction of the street since early April 2020, forcing the rerouting of buses to Davie Street.

Since December 2020, city crews have been working to replace Beach Avenue’s temporary barriers with concrete barriers to reopen the eastbound travel lane and retain the two-way protected bike path. Pedestrian crossings at key locations will also be improved with the painting of zebra crosswalks and the installation of median islands to shorten the crossing distance.

Beach Avenue’s eastbound travel lane is anticipated to reopen over the coming weeks, which will allow for eastbound cars and buses to return to improve the area’s traffic flow.

victor gama erects a ‘poet tree’ made of cymbals in oeiras, portugal