For his now legendary portrait of a determined Winston Churchill, Canadian photographer Yousuf Karsh famously snatched away the British prime minister’s trademark cigar just before snapping the pic, thus capturing the icon in mid-growl. While Jane Thomson has never taken a Cohiba away from one of her subjects, she’s on occasion used a hot dog on the end of a knitting needle to get the desired effect from her hirsute subjects. And as one of Vancouver’s premier canine photographers, she’s definitely no stranger to growls.

Thomson insists she didn’t know what she was doing when she first started photographing dogs. Her day job as a TV commercial producer kept her mostly based in LA and constantly travelling. But she vowed that if she could build her commercial business in Vancouver, she’d stay put—and finally get that dog she’d always wanted.

“I was never a photographer, but I always liked photography,” says Thomson, who went to art school before settling into a career as a producer. She initially thought she would take her new little dog around town and snap pictures of the city streets as her preferred subject matter.  But Phoebe, a handful on the leash, kiboshed those plans. “She was like a problem child that I had to watch with eagle eyes all the time,” Thomson laughs. “There was no way I could have a camera on me and use it.”

Thomson wasn’t prepared to give up. She promptly enrolled in an online course, and when one of the assignments required a photo of a pet, she snapped a candid shot of Phoebe with her iPhone. More pictures followed, and, before long, she was running into people waxing poetic about all the pooch pictures posted online. Soon a friend referred a friend, and then that friend referred another. And Jane Thomson Photography was born. 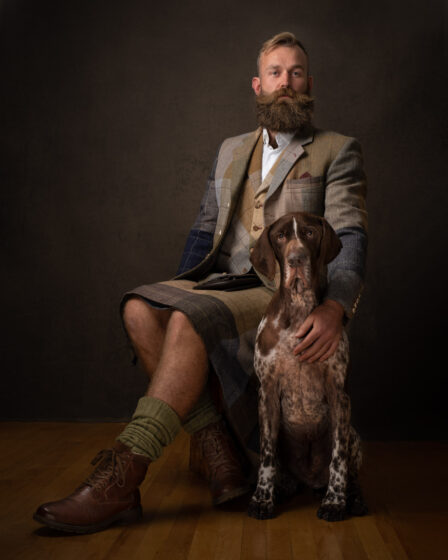 “People started paying me—it felt weird, and then it just kind of took off,” Thomson says. “But,” she adds, “you can’t be a photographer and just say I’m going to do dogs—you have to prepare.”

Animals are entirely unpredictable so she committed herself to learning their behaviour, their likes, their temperaments. At first, dogs would arrive and poop on her carpet or lift a leg on the furniture. “My dog walker brought in this big majestic collie who came in, looked around, and immediately lifted his leg all over my fireplace hearth!” she laughs. “I don’t have carpets anywhere anymore.”

Now she spends 20 minutes getting to know each “client” before framing any shots,  by chatting with the owner and making the dog feel comfortable and relaxed—as if they’re all old friends. She also sends out a questionnaire to the parents before each pup arrives: what’s your pet like, are they scared, are they calm, are they going to end up on the counter? “It was a whole learning curve,” she says of the process.

Like paparazzi, she studies the dogs behind the scenes and then springs into action stealthily. (This is where the hot-dog-on-a-knitting-needle trick comes into play to get them to look up). “Often we’re a bunch of crazy people in the room waving cheese and treats to do whatever it takes to get the dog to look at the camera,” Thomson says. She counts noisemakers as one of her secrets: “I’ll have a squeaker in my mouth, and then with one little blow, they tilt their head and I snap fast!” 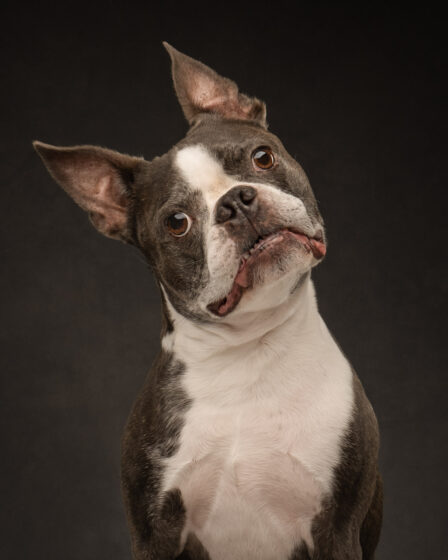 The photos evoke Old Masters paintings, with their plays on light and shadow and each subject’s arresting expression. What could they be thinking? “The saddest part of this is that I get a lot of senior dogs because parents know they don’t have long,” Thomson says. “But the happiest part of it for me is that they’re so grateful to have those photographs after their pet passes.”

Does she have any favourites? “There are too many,” she insists. “But there are some I just absolutely adore, and all for different reasons. And then there are breeds I thought I would never want to own, but then you spend an hour with them, and it opens your whole dog worldview up.”

But by the end of it, the dogs have relaxed, and Thomson is “just another treat lady,” as she puts it. And although she also photographs people, Thomson finds the dog sessions far easier. “People are far more critical of photos of themselves, but they all love the pictures of their dogs.”