new york-based design studio karlssonwilker — the award-winning firm helmed by hjalti karlsson and jan wilker — has realized a monumental outdoor mural equivalent in size to an 11-story new york building at ‘the max’, a luxury residential property in hell’s kitchen by developer TF cornerstone. rising 44 stories above manhattan’s waterfront, ‘the max’ redefines riverfront living through hospitality, art and architecture — however the development faced a particular challenge. 400 of the 1,000 units face the back of the department of sanitation garbage truck depot, a 120 foot tall unfinished concrete wall. TF cornerstone tapped the creative team at karlssonwilker to conceive an installation that would bring light, energy and interactivity to residents, as well as the greater urban context. the resulting ‘mural at the max’ is an awe-inspiring and vibrant and work of art that presents a creative solution for apartments that face walls, and offers an artistic amenity that residents can engage with year-round.

to learn more about the project, designboom spoke with hjalti karlsson, jan wilker, and connor muething of karlssonwilker about their brief from TF cornerstone, their creative process, and some of the easter eggs hidden throughout the mural.

all images courtesy of karlssonwilker

the hand-painted ‘mural at the max’ stands at a sizable 28,000 square feet, and features a multi-dimensional, monumental cloud-scape sitting above an urban sprawl of skyscrapers, and the new york city skyline below. the cityscape’s illustrations combine landmark buildings in the city, as well as those within the TFC portfolio. it also pays homage to the essential work of the department of sanitation, with a garbage truck subtly integrated into the scheme.

spread across the cloud-scape are a collection of hidden poems that create an interactive experience between the artwork and viewers. karlssonwilker worked with the poetry society of new york to commission ten local poets from various new york city neighborhoods to write poems that celebrate the neighborhood, spotlighting its history and architectural features. in order to read the poems in full and discover the easter eggs in further detail, it was planned that each apartment with a view of the mural receives its own pair of binoculars, with a permanent telescope also installed in the courtyard to aid in this discovery. 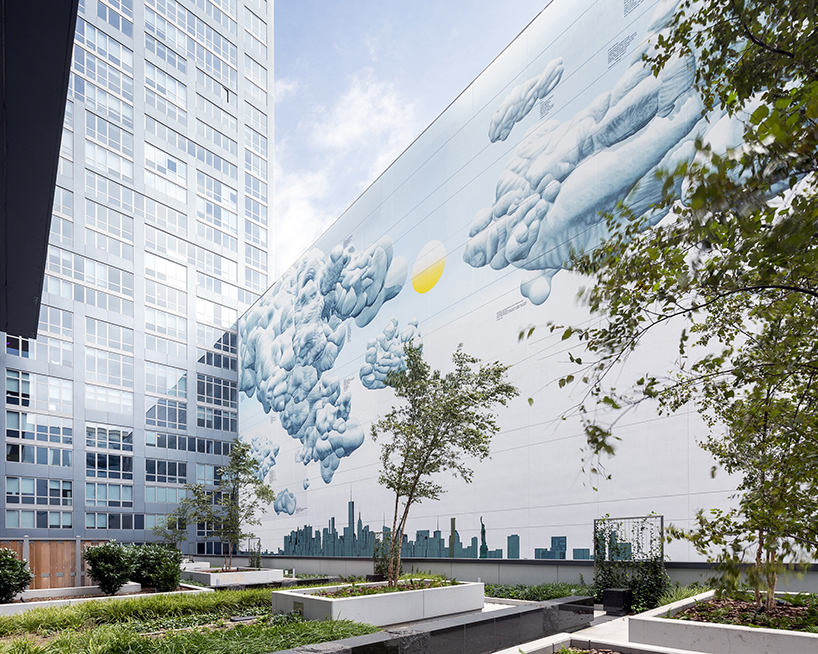 designboom (DB): what was the brief set out for the project, and how much creative freedom did you have to explore the proposal?

hjalti karlsson, jan wilker, and connor muething (HK, JW + CM): our client, TF cornerstone, was planning to build a new residential building on 57th street in manhattan all the way on the far west side. they were planning for a large building, around 40 floors that would occupy almost half the block between 11th and 12th avenue. stakeholders were worried that roughly 400 of the 1,000 units directly face the back of the department of sanitation garbage truck depot, a 120 foot tall unfinished windowless concrete wall, an unappealing view. so the brief was wide open, they wished to ‘beautify’ the wall and make it interesting and exciting for the residents and guests of the building. TFC was an excellent partner and client for this visionary project. 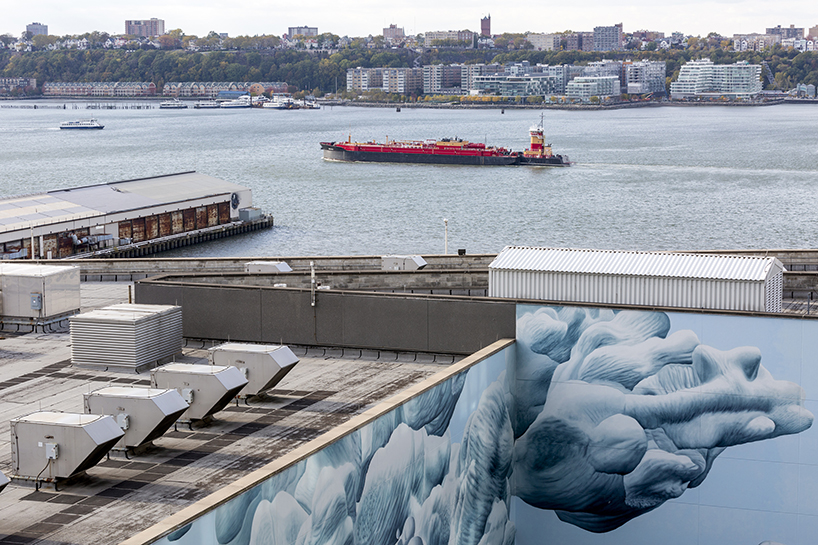 DB: what was the making process like? how long did it take to complete?

HK, JW + CM: the mural is 129 feet tall by 250 feet wide. approximately 1,800 pounds of paint were used. it took 6 painters 5 weeks, working 12 hour days, 7-days a week to paint it. the mural is the equivalent of a 11-story new york building, and roughly one third of a new york city avenue block in length.

DB: what are the challenges in creating an artwork of such scale, particularly for an urban and outdoor setting?

HK, JW + CM: it is quite a unique space — not quite public, not quite private — but we were excited that TFC saw the wall as an opportunity to do something special. we proposed all sorts of solutions, including a 24 hour a day, 365 day a year printer head that would work its way around the wall, constantly drawing — even this was on the table. for the final product, we made sure to consider the residents that will live with this wall every day, adding some hidden elements and an opportunity for discovery. 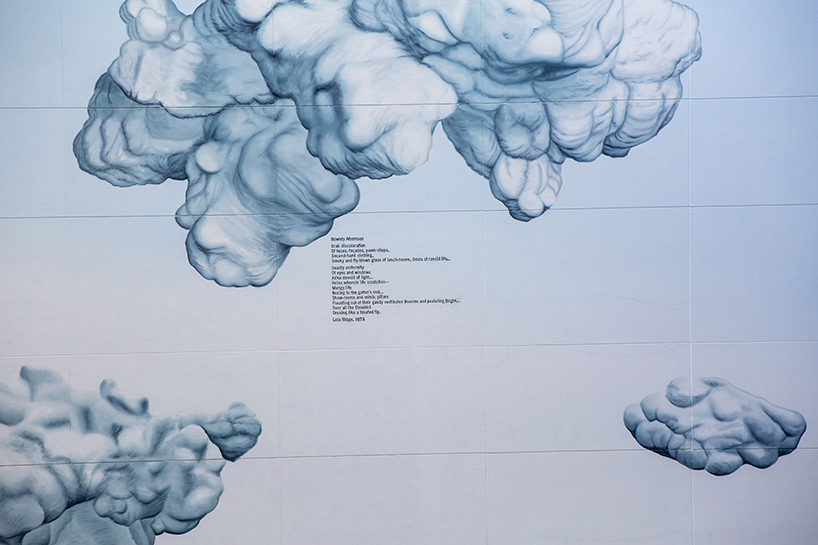 DB: how were the poems chosen, and what messaging do they seek to express?

HK, JW + CM: hidden easter eggs of poetry are interspersed throughout the mural. we worked with the poetry society of new york to identify local poets from various new york city neighborhoods. ten poets were commissioned to write 25-40 word poems that celebrate a new york city neighborhood, paying particular attention to its history and architecture. six poems about new york city from the public domain were also selected to be included in the mural. storytelling is a recurring theme in our work at karlssonwilker and integrating local poetry felt like a beautiful way to connect viewers to the city.

DB: how do the motifs and imagery of the mural seek to engage with and transform the context of the site?

HK, JW + CM: the design features a futuristic rendering of a three-dimensional cloud-scape above the new york city skyline, with a few morphing winged and finned creatures. each apartment with a view of the mural will then receive its own pair of binoculars and there will also be a permanent telescope installed in the courtyard to aid in this discovery. 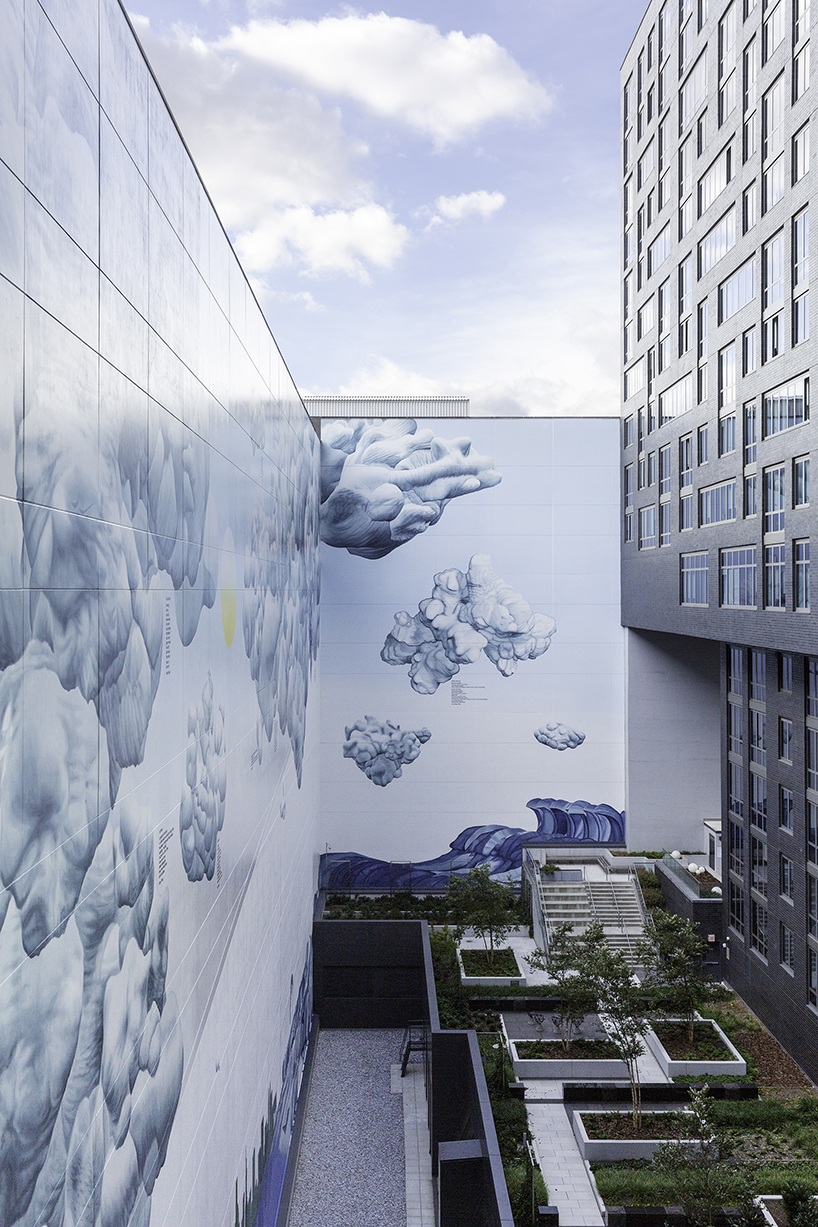 DB: what impact do you want the mural to have on residents and guests at ‘the max’?

HK, JW + CM: we hope that the residents at ‘the max’ will benefit from an improved daily living experience with the cloud-scape in view outside their windows, and that the elements of discovery will continue to engage them. we also hope that other real estate developers will see the value of mural art and its positive influence on city residents, especially since the pandemic has led to much more time spent inside homes and within the community.

how SO – IL and IMUVI designed and built ‘las américas’ in león, mexico

Board appointment at Morgan Sindall

‘A lot of blame to go around’: Health expert says governments not co-operating on...