London-based designer Yinka Ilori draws on his British and Nigerian heritage to tell new stories in contemporary design. He studied Furniture and Product Design at London Metropolitan University and began his practice in 2011, designing and making upcycled furniture. He now also works both on a larger scale, with recent installations such as Happy Street at Nine Elms, The Colour Palace at Dulwich Picture Gallery and Get Up Stand Up at Somerset House, and on a smaller scale, having developed a range of tableware and home accessories. We caught up with him to find out more about his breakthrough collection, If Chairs Could Talk, pieces from which have been exhibited at the Vitra Museum in Switzerland, New York’s Guggenheim Museum and the Brighton Museum and Art Gallery in the UK.

Tell me a little bit about your childhood education and background in terms of how you first became interested in creativity, design and sustainability.

As a toddler, I loved to play with bikes, cars and tricycles – they brought me joy and allowed me to imagine or dream. I think we often forget that the first designed objects we come into contact with are all about play. So that was my first entry. I went on to study design technology and fine art at college. I wasn’t very good at fine art, so I went more in the direction of design and technology, and then went on to a degree in product design and furniture at London Met University, and that was when I really started to consider design as a career. Sustainability is something I’ve always seen around me, for example, going to Nigeria, and seeing people and communities repurpose the everyday objects they find around them, such as breezeblocks, tires, or odd bits of wood, into seating, benches or to create facades. 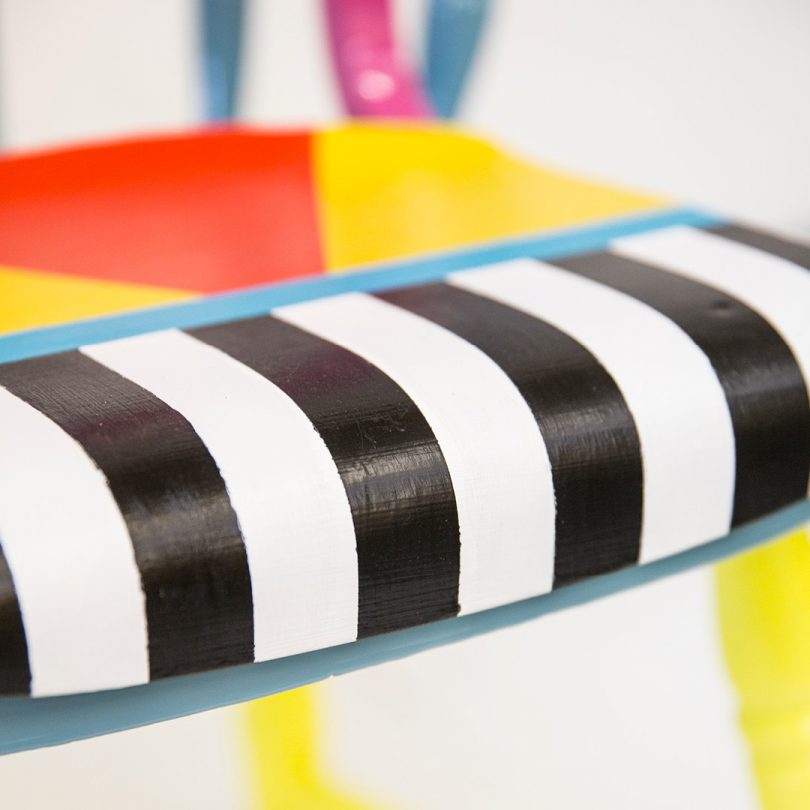 How would you describe If Chairs Could Talk?

If Chairs Could Talk is a collection I produced for a concept store on King’s Road in London. It’s a big, glossy, finished space – and so I was interested in taking objects off the street – that had been thrown away or discarded and damaged – and putting them into a public space. There was a feeling of taking what was unwanted and giving it a new life. People responded really positively and it was fascinating to me how we often identify with or respect something new and polished, and yet they were the same chairs people had walked past and ignored in the street. 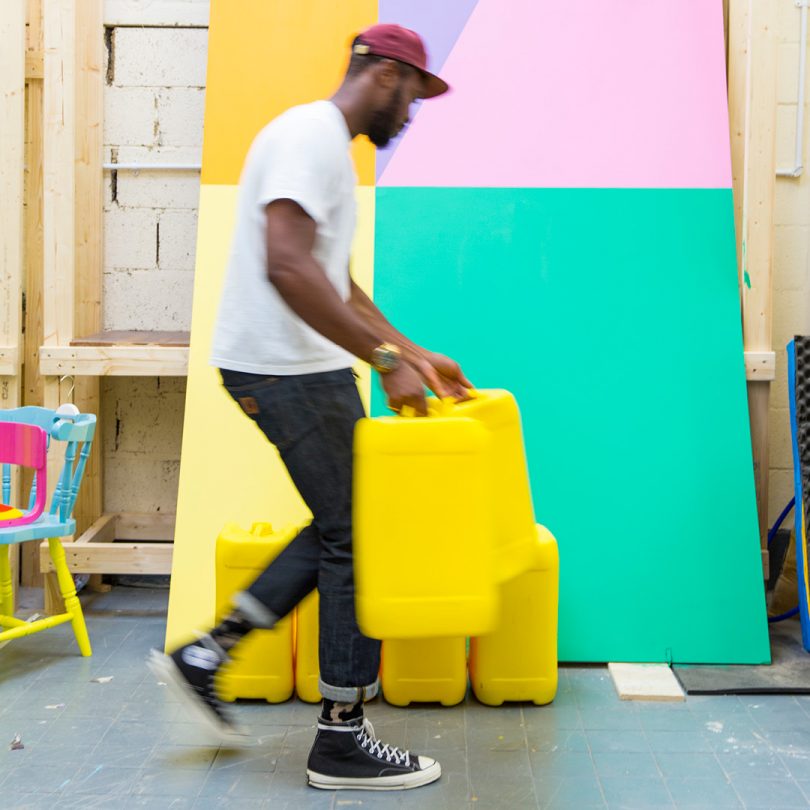 What inspired this project?

Those chairs, that were out on the street and people didn’t care about, were transformed and suddenly people wanted to praise them and say “Wow, I love them”. It was amazing – and I think that’s how we sometimes treat other people. So each chair told the story of somebody I grew up with. The chairs each had names such as A Trapped Star, Backbone and A Helping Hand that reflected the characters of those people. Some of them grew up to be famous actors or successful lawyers, some sadly turned into delinquents, despite the fact I knew them as intelligent, kind people. There is a Nigerian parable that says, “No matter how long the neck of a giraffe is, it still cannot see the future,” so the message of these chairs was that we shouldn’t pre-judge people. 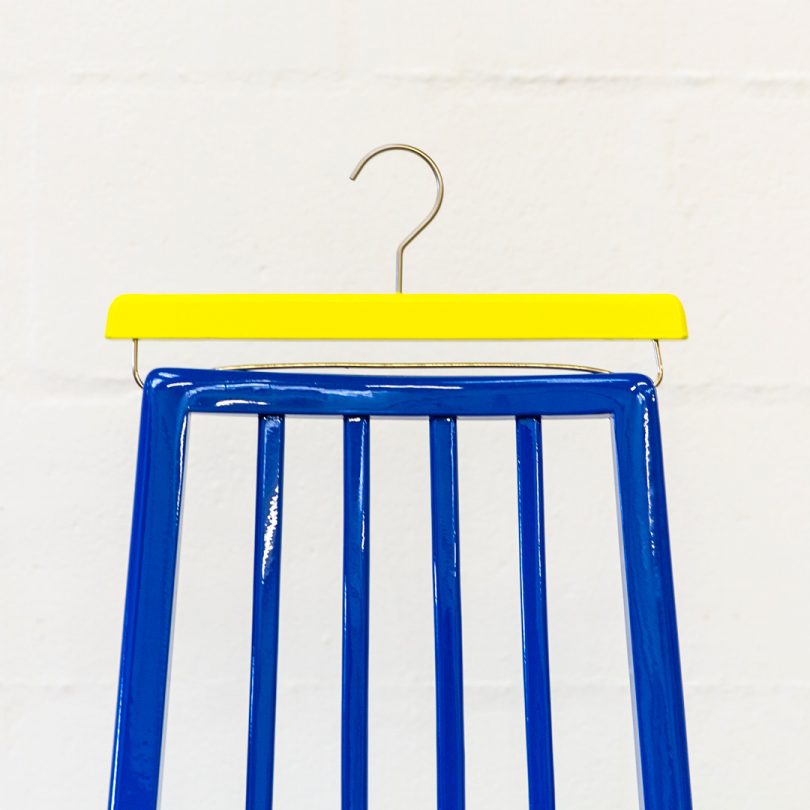 What waste (and other) materials are you using, how did you select those particular materials and how do you source them?

The If Chairs Could Talk collection is made from discarded and broken wooden chairs that I found on the streets of London. I’d be on the top deck of the bus and spot a chair in a skip or about to be thrown away, and I’d get off the bus, grab the chair, and hop back on with my new fellow passenger! My Mum got quite frustrated with the number of broken chairs that started to fill my room, and eventually spill out into other rooms of the house! She never quite understood my fascination, but chairs are really powerful objects. When you sit on a throne, you instantly have status. If I gave you a low chair and I had a high chair, people look at me as superior just because I’m on the higher chair. My Dad’s chair at home was sacred – only he could sit on it. As kids, we would fight over who got which seat in the car. So using chairs was about understanding that such a simple object can demand status and create hierarchy instantly. And I would think about how I could take these objects and give them a second lease of life, upcycle them and give them a new narrative. 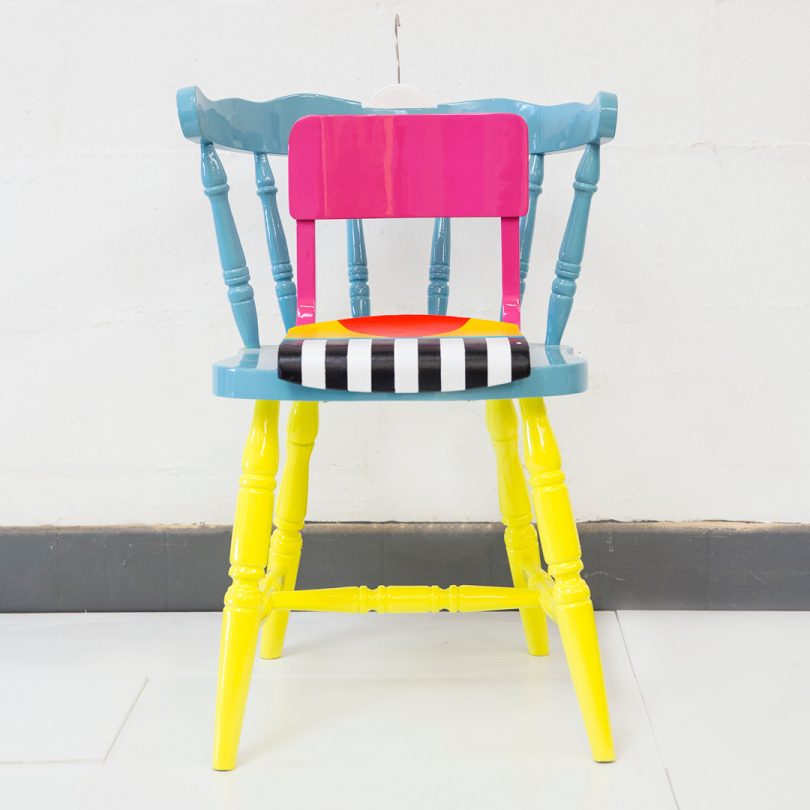 When did you first become interested in using waste as a raw material and what motivated this decision?

It was probably in Nigeria. Over there, every object can have an afterlife and can be reused in a really sustainable and environmentally friendly way. But my first realization of how I could apply that to my own practice was when my tutor, Jane Atfield, set us a brief called Our Chair, which was inspired by Martino Gamper’s 100 Chairs in 100 Days. The brief was to find two chairs that are unloved or thrown away, and recycle them into a new piece of furniture, giving them a new narrative. 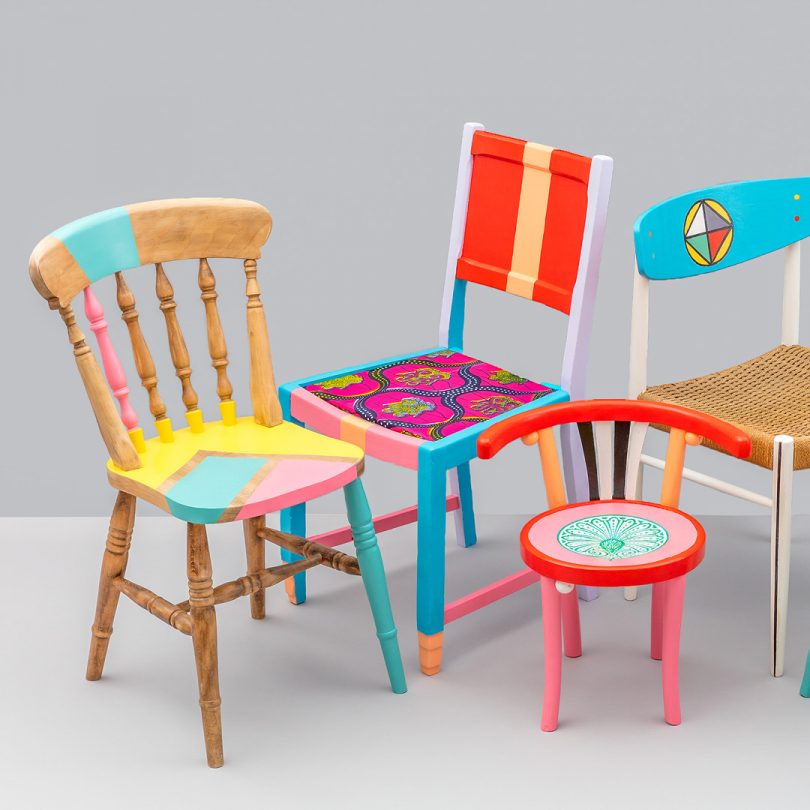 What processes do the materials have to undergo to become the finished product?

The creative process is quite an organic process for me. I will take this broken chair out of its environment and into the studio – and even as I’m walking to my studio with this chair, I’m already breaking down the chair in my head, trying to work out how it could look and what sort of narrative it could share? Was it made in another country – is it an immigrant to the UK? Could its backrest be repurposed as a leg? Is there a parable that it calls to mind that might help me tell its story? And then when I get back to the studio, I’ll take it apart and lay it out on the ground, almost like a piece of flatpack furniture and try to find a new use for every component. It’s quite a different process to the one I was taught at University.

What happens to these products at the end of their life? Can they go back into the circular economy?

Yeah, they can. I work at the intersection of art and design, so I hope they will become heirlooms and passed down through generations. I want them to be like pieces of jewelry that you can cherish and keep for a long time. But you can add more layers and create even more of an attachment to it – remake it again and add to its story. 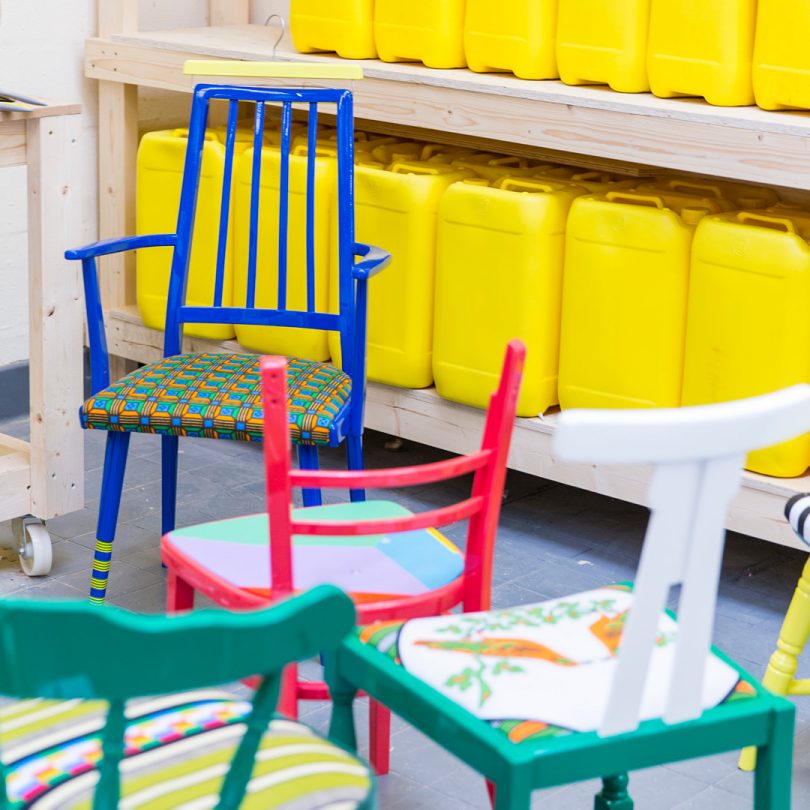 How did you feel the first time you saw the transformation from waste material to product/prototype?

I think I would have to go back to that first project at London Metropolitan University for Jane Atfield. I made a weird-looking, sculptural chair from two cafe chairs. It was this really sort of sleek silhouetted green chair, and it wasn’t really functional. But I just thought, “Wow, I’ve created this piece of furniture, using those objects.” And I don’t think that form could ever have come about without those two objects that it was made from. Even now, when I’m making batch-produced work, that idea has stayed with me. 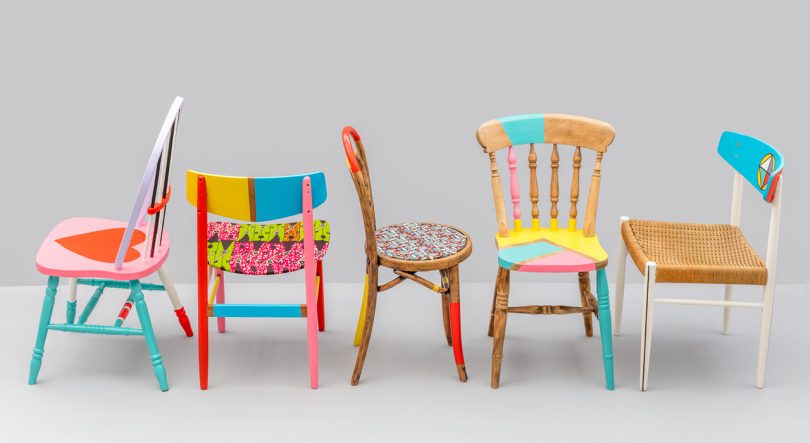 How have people reacted to the project?

People have reacted in a really, really incredible way. I think they can all kind of resonate with and connect with the fact that, not only am I creating design objects, that are perhaps also pieces of art, but I’m also trying to educate people about upcycling and sustainability – and the fact that you shouldn’t always just throw things away, but then maybe think about repairing or reimagining something instead. 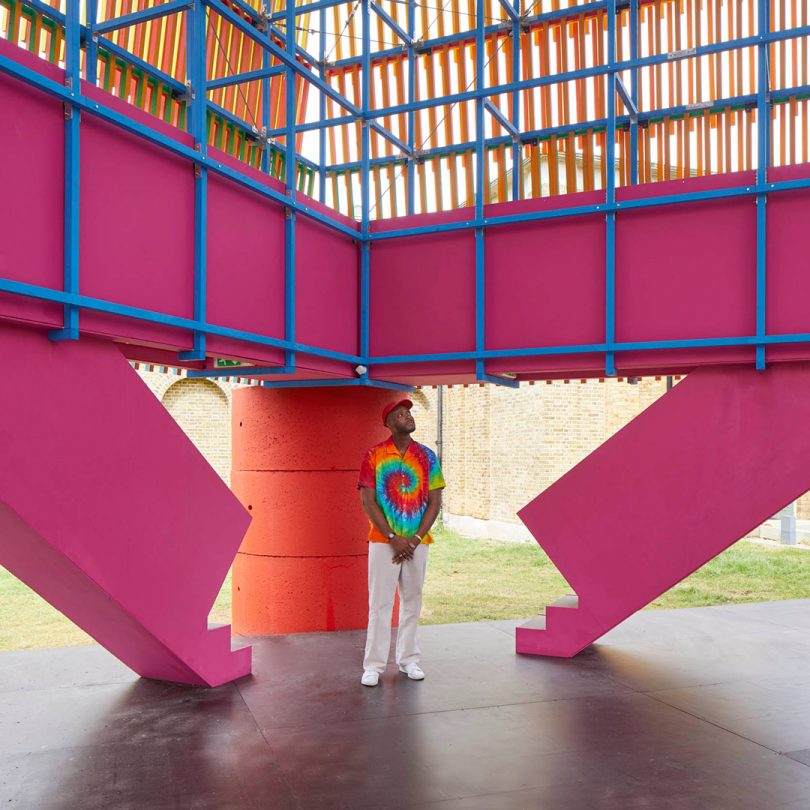 How do you feel opinions towards waste as a raw material are changing?

I think I have a responsibility to make sure that I’m very conscious of the things that I do within design – to think about the afterlife of that project. What is the lifespan of that project? And can it be passed down? Where would it go? How would it be used? And I now try to factor that idea of legacy into my contracts. But the next generation is all over this stuff. I am so impressed with how informed kids are about climate change, so yeah, I think it’s changing – for the better.

What do you think the future holds for waste as a raw material?

There’s a long way to go with it. Sustainable or recycled materials are still quite expensive – and it can be hard to convince clients to spend money on them – but that’s changing. I’m hopeful. I think we’re having the right conversations and more and more people are doing the right thing.

Contractor gets 10 months in jail for trench death

Province of B.C. and Heritage BC Announce Results of Largest Heritage Infrastructure Funding –...