In a modest restaurant and butcher shop in Tuscany, the most renowned butcher in Italy carves great slabs of meat and grills them to perfection. Here at Antica Macelleria Cecchini the bistecca Fiorentina—a two-inch thick Porterhouse cooked to Dario Cecchini’s precise specifications—is lovingly prepared on massive grills in two enormous charcoal pits. We dropped by for a visit before the pandemic to learn the secret to perfectly charred steak.

The inside of the place is on the small side, seating augmented by two gigantic long tables on the patios out back, needed to handle the droves of tourists who come to visit the most renowned butcher in Italy. Inside sit two enormous charcoal pits with massive grills resting a foot above, the burning wood underneath heating them to temperatures that can reach in excess of 700 degrees F. This is how the steaks get their acute char, while keeping the cuisson of the meat inside rare to medium-rare. Never any more than that. There is a rib-eye option, a bistecca Panzanese, which is basically a boneless round steak taken from the thigh of the animal, and a very few side dishes and crostini. But it’s the bistecca Fiorentina, a two-inch thick Porterhouse steak thrown on the grill and cooked to Cecchini’s direct orders, that drives the crowds.

Cecchini began his professional life as a butcher after studying veterinary science. His first foray into working with meats ready to be served was to make traditional sausage, half pork, half beef, with red wine, salt, pepper, garlic and wild fennel seeds. From these it was a simple step from butchery to running a restaurant. He likes to (mis)quote the French food writer and philosopher Brillat-Savarin, who said: “We can learn to be cooks, but we must be born knowing how to roast.”

“Great chefs are born; grill masters are made,” is Cecchini’s interpretation. And with it, he added the grill master tag to his name. Not that it is easy work. The butchery is one thing. Mastering that grill, at that high a temperature, takes vigilance, stamina, and a huge tolerance for heat. Even five metres away you can feel it. A metre away is virtually intolerable for the uninitiated.

He is an eighth generation butcher; his family have been working this trade in Tuscany for 250 years, buying meat from the same two low-quantity ranchers for 30 of those. The quality is impeccable. The ranchers have what he calls, “a profound sense of the quality of life of the animals. My father taught me, and I know it is true, we share the earth with the animals. We respect them. And the ranchers we work with share this same spirit.” He says this with such passion, you know he is sincere.

Aging the various cuts is an important issue, and it does vary. Brisket is given around two weeks; the great Fiorentina cuts, a month. Each animal is different, so there is no rigid formula, but rather, studious inspection as the days go by, until it is determined the meat is aged just right.

When it hits the grill, there has been literally no seasoning at all. “We want the meat to shine for itself, and it always does. We do not tell our guests the meat is unseasoned, we want them to decide for themselves if they need anything. I want the primitive meat flavour only. Cucina primitivo. Almost Palaeolithic,” he says, smiling broadly. The meat hits the grill at room temperature, no chilled meats. Nor will you ever find a thermometer on the premises. “We watch, and we know when it is ready.” 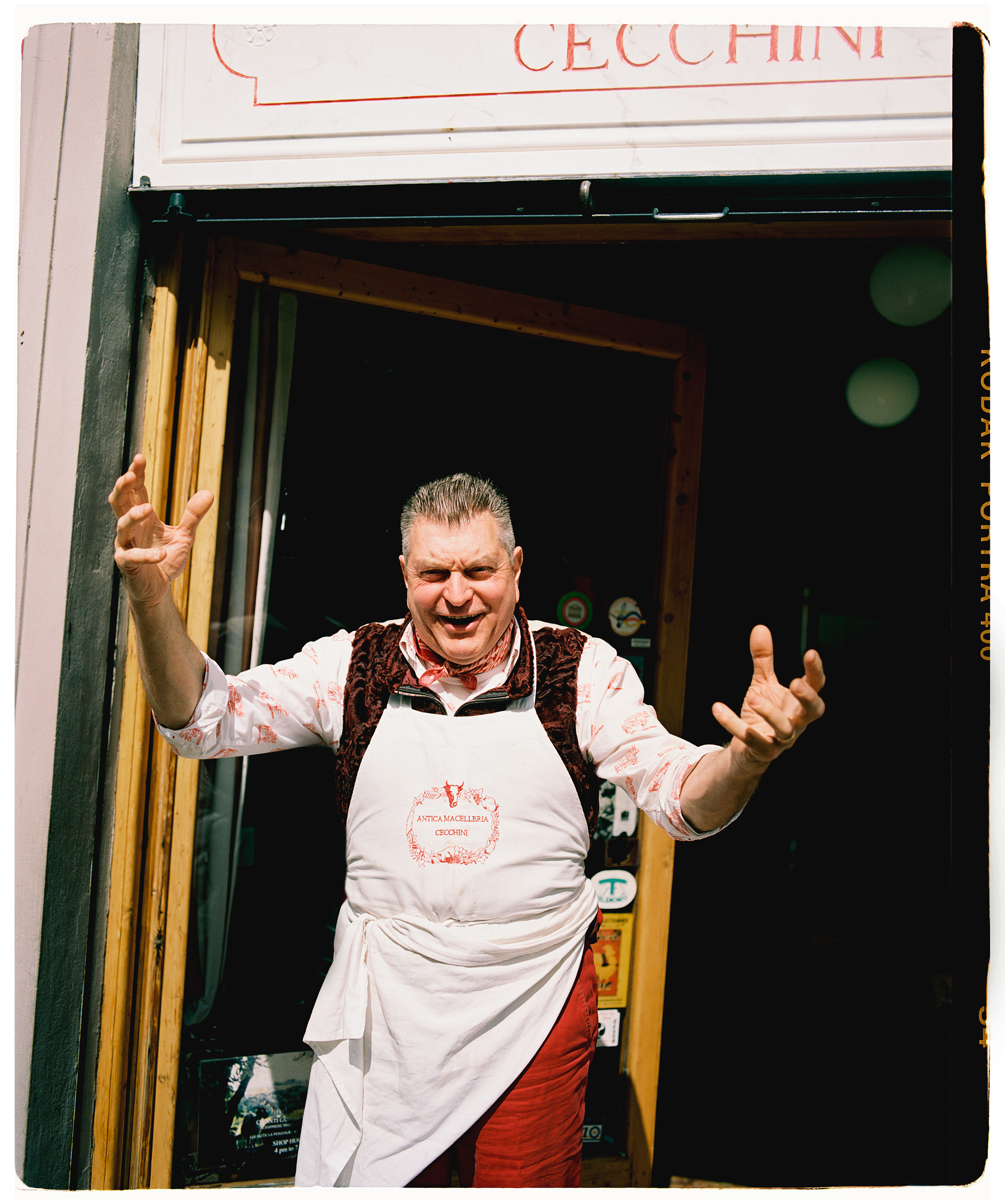 He is something of a scholar about bistecca Fiorentina. “There were hints, in the 1500s, with the Medici cooks, that something like this existed. But it is not until near the middle of the 1700s that the words ‘bistecca Fiorentina’ were actually written down.” He notes that Tuscans come from the Etruscans, so there is every reason to believe some form of this cut of meat, and cooking method, existed long, long before 1500.

Many chefs have said the simplest things are the hardest to do, and so it is for Cecchini. “Simple olive oil, salt, raw vegetables and meat. It is easy to add ingredients, very difficult to subtract them.” The salt is specially prepared at the restaurant, the oil is of course local extra virgin, and the vegetables tend to carrots, celery, red onion and fennel. You place half a teaspoon of salt into a large thimble of the oil, and dip the vegetables in. The vivid flavour is almost shocking; you do not expect such clarity and intensity. Delicious.

Cecchini often comes to the front patio raising two huge steaks in his huge hands, intoning an ode to the beloved carne, shouting the word loudly and repeatedly at the end of the performance. The guests, clearly from all over the world, love it. And then the cooked meat arrives. Everything is served family style, on large platters meant to be shared. The bone is there, among all the small slices of steak, and almost always the very last piece to be taken, usually with some discussion about which lucky soul will get that special morsel. 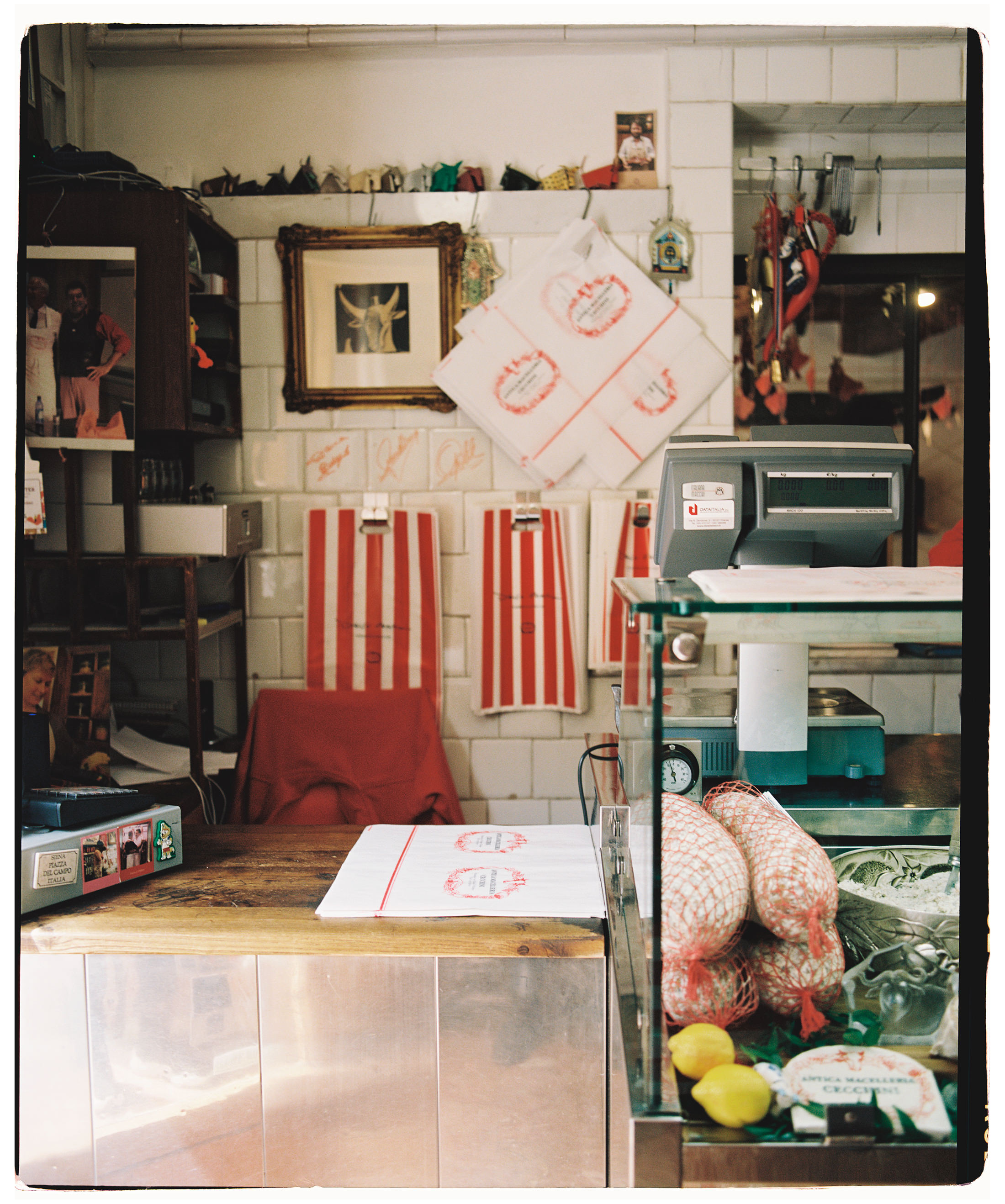 Much in demand all around the world, Cecchini does occasionally agree to travel and collaborate with a host chef. “It is the same with meat as it is with wine,” he says. “There is no such thing as best, and I do not have a favourite. Each region I visit is different, and so the beef in that region is unique, different from the others.” His performances at the Macelleria inform how he presents himself abroad. There is loud music (mostly AC/DC), a herder’s trumpet blaring sporadically as meat enters or leaves the charcoal pit, and Cecchini himself growling “Carne!” as he dances through the guests.

Because it is illegal to travel to some countries (including Canada) with fresh meat from his own ranches, he relies on each local chef to source the best possible. “They always know the finest butchers, the best meats. We offer them our restaurant menu as an option in how the evening is constructed, but we never impose. I have met a lot of wonderful people, and found a lot of wonderful meat, all around the world.” That includes the team at Nightingale restaurant in Vancouver. Cecchini worked with chef Phil Scarfone on a collaborative dinner there in April 2019, and he and his small team arrived to find half a side of beef from Cache Creek Farms waiting.

Back in Italy, Cecchini surveys the two long tables, and nods approvingly. All is right with the world here in Panzano. This is a living, practical homage to Italian culinary tradition, and the man at its centre cannot be more enthusiastic. He has a whole cooked steak in his hands. He takes a gigantic bite. Cucina primitivo in the 21st century.

This article from our archives was originally published in our Summer 2019 issue. Read more Food and Drink stories.

COVID-19: B.C.’s strategy is all about vaccination – even as case counts rise

The Burnt Cork Collection Rises From the Ashes

Refined Yet Risqué Gifts for an Unforgettable Valentine’s Day