The new Cat 315 is better in every way than the machine it replaces, the 315F L. Cat has upgraded the hydraulics, engine, cab and swing drive and they’ve packed a lot of standard tech on this 16-metric-ton machine to help you get the job done faster.

In fact, Cat is calling the new 315 the most productive excavator ever in that 15-ton/16-metric ton size class.

We’re going to get into what’s new about this model, how they achieve some pretty substantial performance and productivity gains and how Cat is really stacking the deck here against the competition in terms of comfort improvements and standard technology.

Check out the video above for all the details, or read on below.

Cat considers the 315 a “small” excavator. As a 16-metric-ton machine, its not a compact or mini excavator, but not large enough to be considered a midsize Cat excavator. In fact, within the small lineup, the 315 slots right in the middle between the 13 metric ton 313 and the 18 metric-ton 317.

The 315 is also a compact radius machine with only 5.1 feet of tail swing radius. And with 19 feet, 6 inches of digging depth and a 23-foot max loading height, though its digging forces can’t quite match up to larger machines in the Cat lineup, the 315 is a very versatile option in that it offers comparable reach and loading heights to those larger machines while still in a very compact package.

So, while you might typically think of larger excavators for loading trucks, Cat says you might be surprised how many of these small excavators in that 30-40,000-pound size class like the 315 are doing that work on a daily basis and in use not just on residential and site prep like you’d expect but on large infrastructure and road jobs as well.

The 315 in particular is a compelling machine for roadside digging and loading due to its compact design and formidable reach.

And because of its weight and size, transportability is less of a headache as well. When the 315 is equipped with 24 inch pads, it falls within a transport width of 8 feet 6 inches, so you can throw this thing onto a tag trailer and move it between jobs with a pretty simple setup. 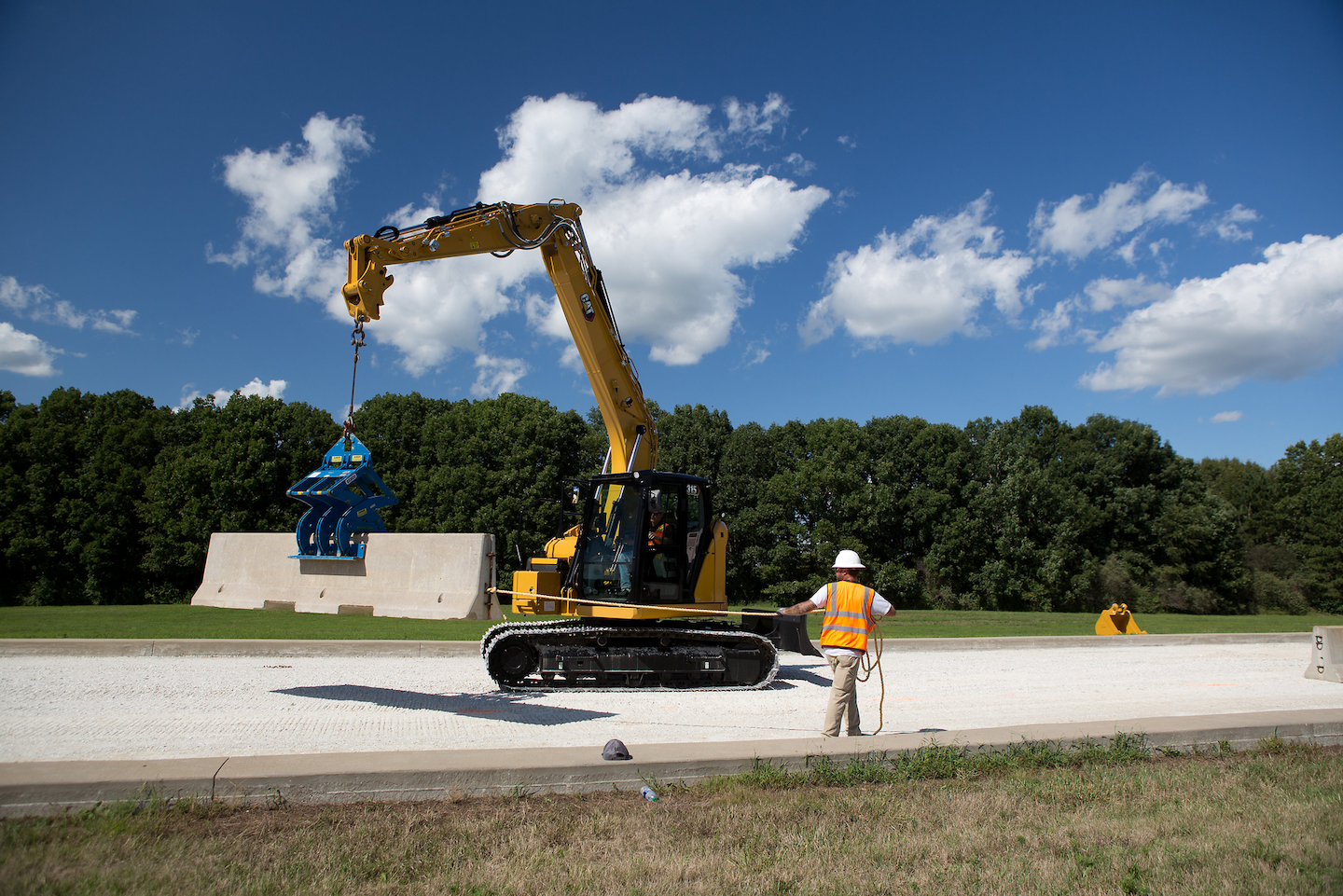 But Cat is confident in this machine’s ability to tackle a lot more than loading trucks on the side of the road and that’s due to some significant performance improvements.

The new 315 is the direct replacement for the previous generation 315F L. As we’ve discussed in previous videos, Cat is eliminating most of the letters from its model names, in particular letters that denote generation. So the new 315 is just called the 315.

The big difference maker in this jump from the 315F L to the new 315 is the new electronically controlled hydraulic system. With this new system, Cat focused on increasing hydraulic efficiency, specifically to create more hydraulic flow at a similar pressure as the system before it.

In other words this new system is able to generate more power at the same hydraulic pressure as before, which means you increase the speed of this machine while burning less fuel in the process. 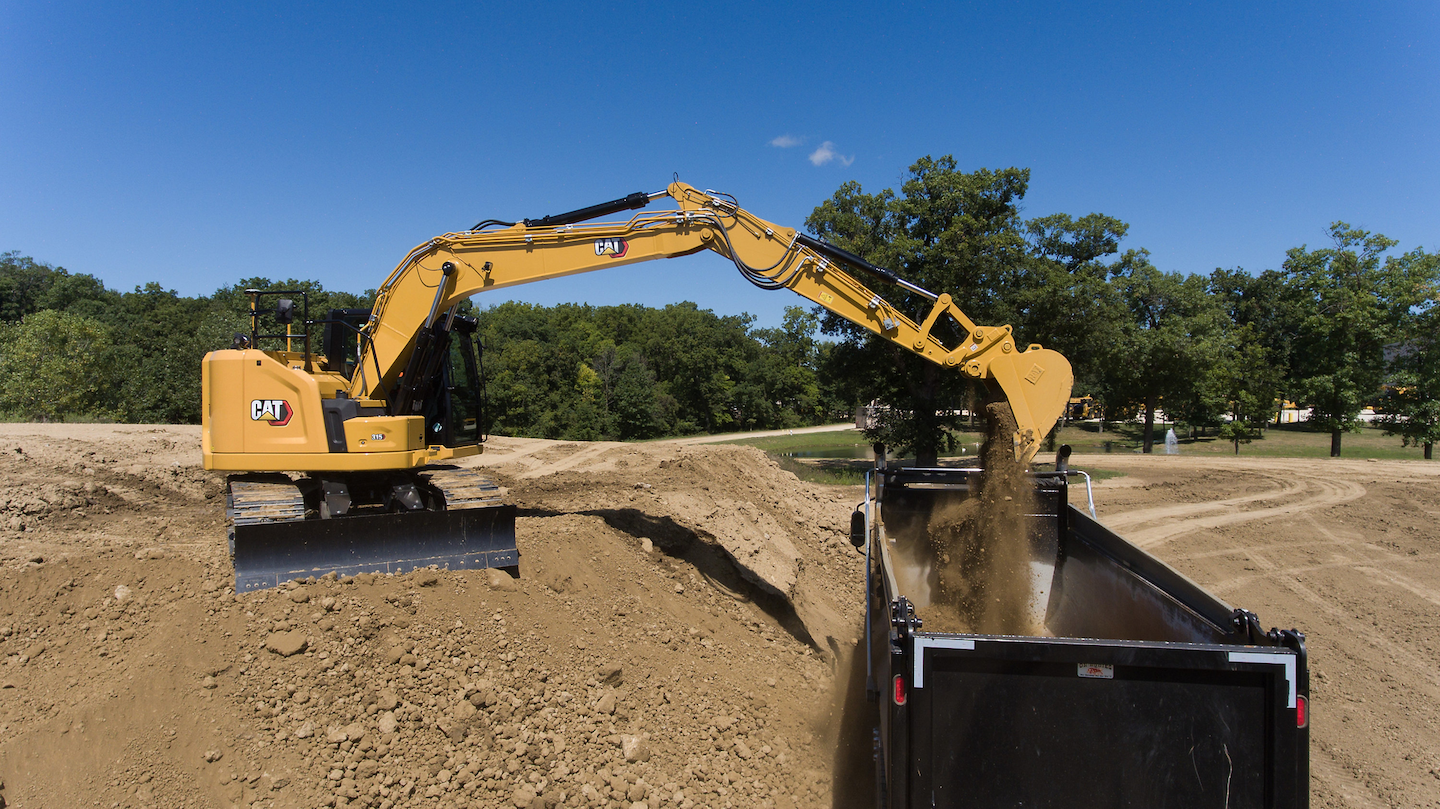 Now, its electrical wiring going from the joysticks to that main valve bringing a big increase to control response times.

So not only do you have a faster machine thanks to the increased hydraulic power and speed on the 315, but you also have a faster responding machine. In the end, operators moving from a 315F L to one of these new 315s should notice a world of difference. Specifically, Cat says productivity is up by as much as 8 percent in the new 315 over the 315F L.

Plus, from a pure maintenance standpoint eliminating those pilot lines, simplifies the hydraulic system and eliminates potential leak points. But we’re not quite done with performance improvements. Cat has also increased swing torque on the new 315 thanks to a redesigned swing drive.

The improvements to that swing drive coupled with the hydraulic system improvements have upped swing torque by 10 percent over the 315F L.

Plus, Cat has also made improvements to the drive system adding up to increased drawbar pull on this machine by an impressive 14 percent.

So just to recap, you’ve got faster movement and response thanks to the new hydraulics; more swing torque which will definitely come in handy in backfilling, sideswiping, trench cutting, but also in any hillside work particularly swinging up hill; but then you’ve also got that increase in drawbar pull, giving you more tractive power and better performance in softer conditions and in those hillside applications.

We’ve spent most of our time here with the 315 talking about hydraulic-related advances on this machine, but there’s also a new engine to discuss as well.

The C3.6 uses diesel exhaust fluid in a an SCR emissions control system with a DPF, but in addition to the power increase it brings to the 315, this engine is also capable of saving you on fuel as well. 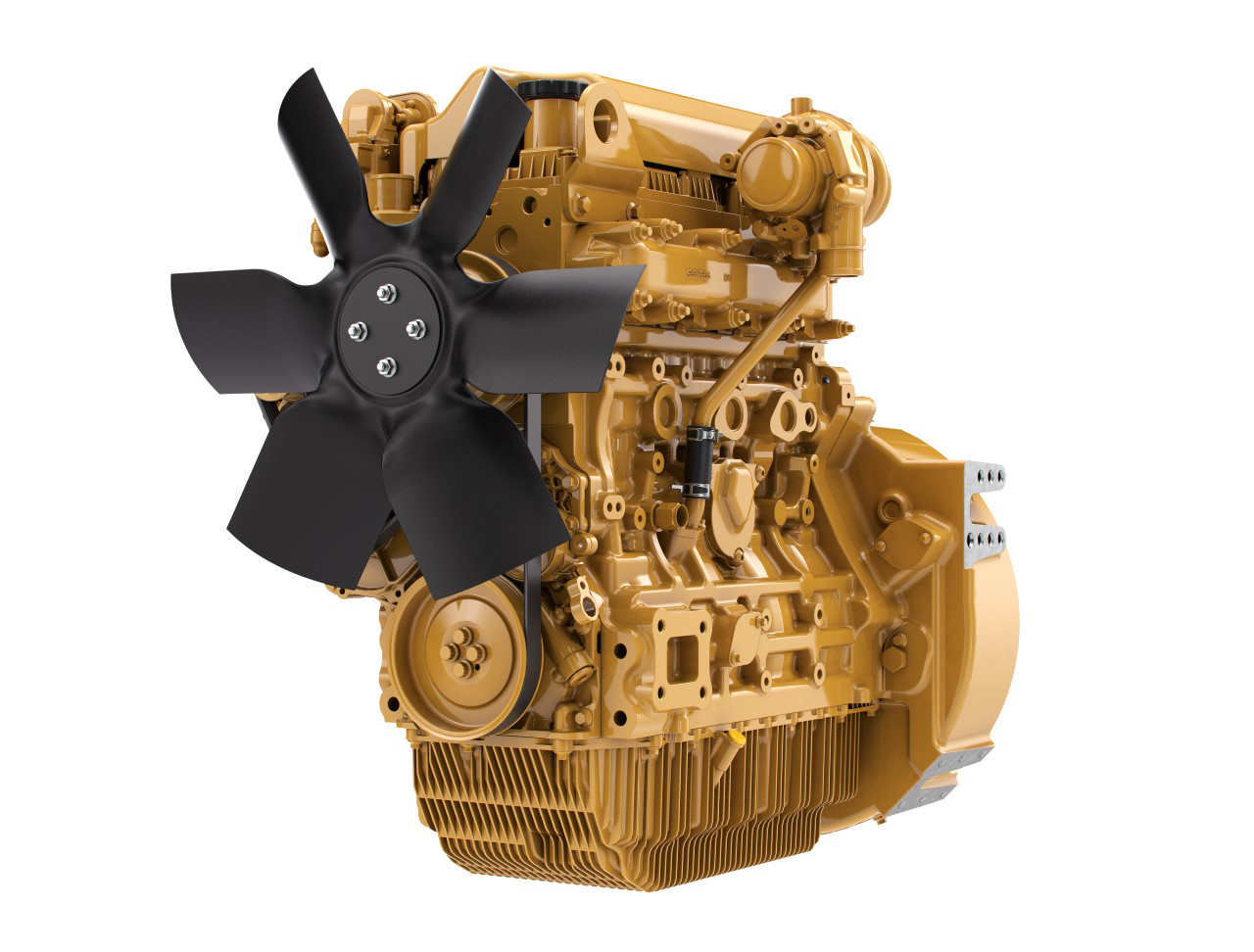 Depending on the application, Cat says you can save much as 15 to 20 percent. Key to that fuel savings are the three working modes Cat has built into the engine’s software.

Of course, there’s an Eco mode that prioritizes fuel savings and there’s a power mode which prioritizes giving you every ounce of power the machine has. But instead of a normal mode on the 315, Cat has gone with a new “Smart” mode.

The benefit of Smart mode beyond its smarts—in other words allowing the machine to figure out whether you’re in a position where fuel savings should be prioritized or not—is that unlike Eco mode, it doesn’t really put a cap on your available power.

What makes Smart mode Smart is that it is designed in such a way that it will always lean toward prioritizing fuel economy—right up until the point that you don’t want it to. In fact, Cat says you likely won’t be able to tell any difference when pushing the machine while working in this Smart mode from doing the same kind of operation in Power mode.

But, Power mode is still there if you’re not quite fully trusting of Smart mode. But the way I look at it is, if you know you don’t want to work in Eco mode because you don’t feel like constantly switching in and out of it, throw the machine into Smart mode and let it figure out when it can save fuel.

To me Cat has come up with a pretty good middle ground option for those that don’t want to sacrifice available power, but realize that they’re not pushing the machine the whole time they’re working.

Now, all of the performance improvements that we’ve talked about—the faster hydraulics, the increase swing torque and draw pull, the improved engine power and fuel economy—these already add up to a significant update to the 315 and make it one heck of a versatile machine, especially considering its size.

But when it comes to things that improve productivity, there’s also the standard technology to consider and Cat has made a lot of technology standard on the 315.

First up you’re getting Cat’s Grade with 2D system standard, which is a really nice thing to have on this machine in particular since the 315 is going to be used in a lot of grade work, utility work, trenching, etc.
Cat Grade with 2D is an indicate system so it lets you establish a desired grade and then eliminates the need for a grade checker—or the need to leave the cab— by automatically guiding digging depth, slope and your horizontal distance to assist you in accurately reaching grade without over digging.

Using just this 2D system, Cat says operators can see productivity gains of up to 45 percent. Plus, the system is scalable and it’s ready to upgrade to Cat’s Advanced 2D system or to their 3D system when you’re ready to do so.

Another great technology feature Cat is including standard on the 315 is Cat Payload which gives you real-time weighing and payload estimates allowing you to know just how much you’re putting in a truck, as you load it.

The system allows you to set a target payload so that you avoid under or over loading trucks. The system is accurate within 3 percent and beyond letting you monitor this data from the cab, it’s also accessible off-site and later on through Cat’s VisionLink telematics dashboard, which is also included standard on the 315.

A couple of more standard technology features of note on the 315 are Cat’s 2D E-fence and Remote Flash.

2D E-Fence is a safety feature that keeps the front linkage of the machine within a predefined work area, avoiding accidentally swinging into an obstacle or into a high traffic area on the jobsite.

You can set a ceiling limit as well for any overhead dangers like power lines and the system has cab avoidance as well, keeping the bucket away from the cab when in use on a longer stick or with a quick coupler.

Going back to that mention of the Remote Flash feature, that lets your dealer not only run remote diagnostics on the 315 and troubleshoot any issues, but also gives you remote software updates as well.

Let’s move on to the cab of the new 315 which features some substantial improvements.

First of all, it’s 13 percent larger than what was found on the 315F L and Cat has also increased vertical visibility by a huge 60 percent.

Bluetooth audio and USB ports are standard as is a 10-inch touchscreen monitor which lets you dial up machine diagnostics, settings and programmable user ID settings.

From that monitor you’ll also be able to dial up the view from the standard rear-view and right-side cameras while a 360-degree camera system is an available option.

We’re going to finish up on the 315 here by covering maintenance. The big thing to know here is that Cat says the 315 lowers maintenance costs by up to 25 percent compared to what you had on the 315F L.

Cat says this cost savings comes through the elimination of some maintenance intervals and the extension of others.

First off thanks to this new electrohydraulic system and the elimination of those pilot lines we mentioned earlier, you no longer have a pilot oil filter. Another filter eliminated was the case drain hydraulic filter. That’s two 500-1000 hour filters you no longer have to worry about with this machine.

In terms of extended intervals, Cat has extended the main hydraulic return filter’s interval by 50 percent from 2000 all the way up to 3,000 hours. Fuel filter intervals are every 500 hours and Cat has also implemented new anti-drain valves for keeping hydraulic oil clean during filter replacement and they’ve updated the air filter with a design that doubles its cleaning interval over the previous model.

Meet the 2021 AEMP Technician of the Year

Book Review | Mid-Century Modernism and the American Body: Race, Gender, and the Politics...

A look inside: Arthur Erickson mansion in West Vancouver listed for $14M (PHOTOS)

The booster debate: Will you need a third COVID-19 shot? – National