By the time Joachim Foikis was born on August 11, 1931, in a small town in Poland, fools had been out of vogue for centuries. Once a mainstay of European royal courts, valued (or despised) by kings who sought (or barely tolerated) their unadorned takes on society, the last jesters had long since packed up and left by the time Foikis was studying mysticism as a teenager in Berlin under Nazi rule.

After the Second World War, he earned a degree in economics before immigrating to Canada and eventually making his way to Vancouver, where he would suddenly don a homemade jester’s uniform and plot a new fool’s course in a city only somewhat willing to embrace his role in 1968.

In his new book, Fool’s Gold, author (and frequent MONTECRISTO contributor) Jesse Donaldson chronicles Foikis’ journey and wonders who he truly was: a mystic, a freeloader, a genius, a madman? The following excerpt is reprinted with permission from the publisher, Anvil Press.

It was April Fool’s Day, and Joachim Foikis was about to turn the city upside down.

The red and blue of his homemade uniform shone under the pop of flashbulbs as reporters and photographers formed a tight scrum around him, and the jangle of the bells on his cap made the foyer of Vancouver’s City Hall—normally a place dripping with righteous self-importance—feel more like a carnival sideshow. In one hand, he carried a sceptre adorned with a jester’s head.

Diligently, he answered question after shouted question, his voice soft, his responses peppered with quotes from Socrates, Shakespeare, Mother Goose. Occasionally he paused to click his heels, to jump for joy, to thumb his nose at Mayor Tom Campbell.

“Now I can give my whole time to my job,” he grinned, “to live joyfully for nothing, and to spread joy and confusion.”

When a reporter asked how he was adjusting to his newfound celebrity, Foikis merely shrugged.

“The biggest fools always get lots of publicity.”

He was 36 years old. Tall. Soft-spoken, with an unmistakable German accent. His face didn’t look like the type that took easily to smiling, but he was generally cheerful; and his eyes, peering out from behind a pair of square-framed glasses, were said to “radiate life” and mischief by those who knew him.

Just a year earlier, he had been a self-described “bookworm” living a quiet life in a bungalow on West 15th Avenue in Kitsilano. A husband and father of two. An introvert. A former social worker with two university degrees—one in theology and the other in economics— who had only six weeks to go before he graduated with a third, in library sciences, from the University of British Columbia.

But then he’d seen an angel.

“[T]he angel appeared and whispered in my ear,” he later explained, “and told me to take up the bauble.”

And take it up he had. Shortly after his vision, Joachim Foikis had revived a tradition unseen for centuries and declared himself Vancouver’s official town fool. Beginning in the spring of 1967, dressed in his traditional red-and-blue fool’s motley, he had set up shop on the steps of the city courthouse, where he spent two to three hours each day dispensing philosophy to adults and nursery rhymes to children. He had wandered the streets talking to passers-by with his bauble in hand—the iconic jester-headed staff that served as the source of the Fool’s power, a constant reminder that no one was above mockery—least of all the fool himself.

“Are you a man?” he would ask the downtown business elite, as they hurried from place to place, or looked up, startled, from their newspapers. “Or a fool?”

But now, Joachim Foikis was more than just a fool—he was a fool with the blessing of the federal government. The cheque in his hand was a grant from the Canada Council for the Arts, and for the next year, it would allow him to make folly his full-time job.

“Dressed in traditional fool’s motley, he has nursery rhymes for children and metaphysical riddles for adults,” read the council’s press release. “To many, he is making a serious contribution to the self-awareness of the entire community.”

Meanwhile, up in his office, far from the hubbub, Mayor Campbell seethed.

“When I read about it this morning, I saw red,” he griped to a Vancouver Sun reporter. “An old-age pensioner, who’s worked all his life for his country, gets $1,200 a year. Here’s a fellow who refuses to work and they give him a $3,500 young-age pension. Couldn’t we use it for public housing for senior citizens, retarded children, pensioners, deserving students?”

“I do not mock thee, but by thee am mocked,” Foikis retorted, quoting William Blake. “Thou call’st me madman, but I call thee blockhead.” 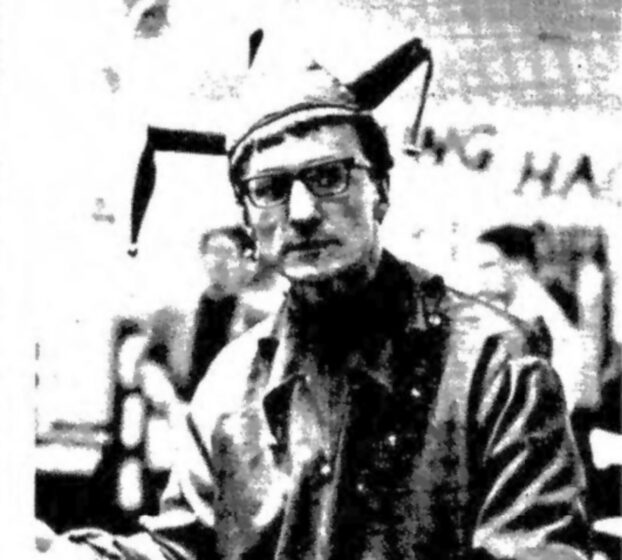 After just 10 minutes of questions, he headed for the door, pausing only briefly outside to chat with a CBC camera crew. There was no time to waste. His was more than a vocation—it was a calling. He would later tell a friend that he felt “touched,” compelled into action by something larger than himself.

“I want to revive the Fool of Joy,” he told reporters. “I want all the world to be a stage—and get every other fool to laugh in the face of death.”

In the years ahead, he would do exactly that. He would make it his mission to transform himself into a living work of performance art, a fool that the country took much delight in, amusing children and irritating magistrates from coast to coast. One charged with spreading the gospel of Mother Goose, promulgating a unique worldview forged in the ashes of the Second World War and honed through a decade of study, one which held a funhouse mirror up to the topsy-turvy world of the 1960s. He would become a figure who ferreted out folly wherever it could be found—on the sidewalks, in the boardrooms, and in the halls of power.

It was a mission that would take him across the country and back, bringing him to international prominence, and seeing him featured in the pages of the Vancouver Sun, the Globe and Mail, Maclean’s, the New York Times, and the Encyclopædia Britannica. It would find him hosting impromptu dance parties in the streets—from the Granville strip to the Downtown Eastside to downtown Toronto, or speaking at universities, colleges, and even the prestigious Esalen Institute.

It would also cost him his marriage, his children, his public profile—and in the eyes of some—his sanity. It would leave him homeless and land him in court more than once. So, who was Joachim Foikis? Mystic? Freeloader? Genius? Madman? Hero? Blockhead? Or truth-seeker on a lifelong search for meaning, one set against the backdrop of a world plagued by folly—a life that ended 40 years after that fateful vision, in a fashion that was equal parts comic, tragic, and poetic.

Although his legacy would be largely forgotten in the ensuing years, he would, in a small way, for a short time, turn the city—and the world—upside down, with a song in his heart and a drum in his hand.

But all of that was yet to come. For today was April Fool’s Day.

And Joachim Foikis had work to do.

This excerpt is from Fool’s Gold: The Life and Legacy of Vancouver’s Official Town Fool by Jesse Donaldson (Anvil Press, 2020); used with permission of the publisher. Read more stories of Hidden Vancouver.

How to Install a Window AC Unit