It may be hard to remember given the pandemic, but trade tensions between the United States and China eased in January 2020 with the inking of the Phase One agreement. Under the deal, China committed to a massive increase in its purchases of U.S. goods and services, with targets set for various types of products. At the time of the pact, the U.S. economy was operating near full capacity, and any increase in U.S. exports stemming from the pact would likely have resulted in only a small boost to growth. The environment is now starkly different, with the U.S. economy operating far below potential. While the promised increase in Chinese purchases seems unlikely to be achieved, any appreciable increase in exports from the agreement is now more likely to deliver a meaningful boost to the economy.


A Cooling of Trade Tensions with Phase One

The Phase One agreement, signed by the United States and China in January 2020, covers a range of issues: protection of intellectual property rights, rules for technology transfer, barriers to trade in financial services, and procedures for dispute resolution. But the most notable aspect of the agreement is China’s commitment to a dramatic increase in purchases from the United States. By 2021, China promised to boost its purchases in specified categories of goods and services by $123 billion.

The agreement’s focus on strengthening intellectual property rights and reducing barriers to trade is typical of recent U.S. trade deals. But the inclusion of specific quantitative targets is highly unusual. Not since the auto pact with Japan during the Clinton Administration has a trade agreement included quantitative targets; and no previous deal has included targets for such a broad range of goods and services.

The table below shows the Phase One purchase targets by category. Importantly, the agreement includes no commitment to expand purchases in categories not listed. In contrast, almost all services purchases by China are covered by the pact. The targets are extraordinarily ambitious. By 2021, China’s total purchases of U.S. goods would be up 75 percent from 2017, assuming that purchases in excluded categories simply hold steady. China’s purchases of U.S. services would be up 45 percent from 2017. By comparison, growth in U.S. goods and services exports to China averaged 6 percent per year from 2012 to 2017, before the trade war sent sales tumbling. The Phase One agreement envisages that growth will be many times that pace in the period ahead. 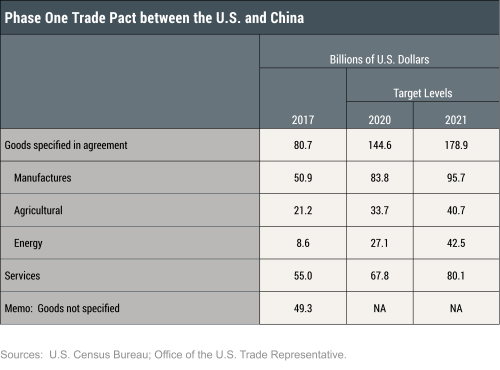 The chart below makes this point vivid by showing U.S. exports to China, on a rolling twelve-month basis, alongside the implied Phase One targets for 2020 and 2021. As with the calculations above, the chart assumes that Chinese purchases of items not covered by the pact remain at their 2017 levels. 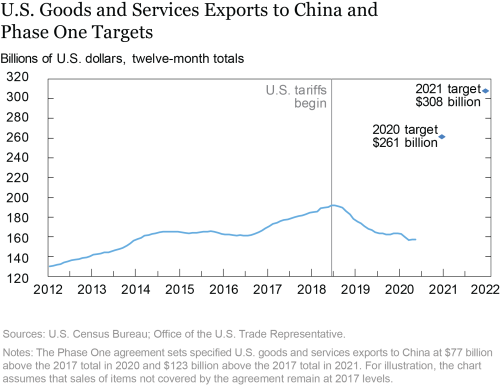 The ambitious nature of the Phase One targets prompted skepticism among many observers about whether they could be met. A simple fact explains why. A $123 billion increase in sales to China amounts to roughly three times the average annual increase in total U.S. goods and services exports since 2012. Back in January, it was difficult to see how the U.S. producers could meet the targets without reducing sales to other markets.

The economic benefits of increased Chinese purchases depend on whether they represent trade creation or trade diversion. If increased Chinese demand is met only by diverting sales from other markets, the net expansion in demand is effectively cancelled out. The same is true if higher Chinese demand is met by diverting sales from the domestic market, something that would lead to higher imports. The COVID‑19 pandemic, however, has altered the global economic landscape, changing the trade implications of increased Chinese demand. U.S. exports have fallen off sharply following the shutdown of economies worldwide. Although most countries are now reopening, foreign economic activity is not expected to return to its pre-pandemic level before early 2022.

As a result, U.S. exports are expected to remain depressed. The panel of professional forecasters surveyed by Bloomberg currently expects U.S. real exports to be down 7.5 percent in the fourth quarter of 2021 relative to the fourth quarter of 2019. As recently as February, the panel expected U.S. real exports to grow by 4 percent over this two-year period. Such a shortfall would leave U.S. exporters with abundant spare capacity, enabling them to meet a large increase in demand from China without diverting sales from other markets.

A look at current spare capacity by product category bears out this point. Both private and U.S. government forecasts indicate that manufacturing production will remain well below pre-pandemic levels through the end of 2021. Although the industry mix for production and exports are somewhat different, there should be ample capacity to meet higher Chinese demand. U.S. oil companies have been cutting capacity given weak expected U.S. and global demand, and would welcome new business. Agricultural supply has no clear capacity limits given farmers’ ability to bring fallow acreage back into production. As of the most recent USDA agricultural census, only 80 percent of available cropland was harvested.

This does not mean the purchase targets are likely to be met. Ramping up purchases from the United States so dramatically and in such a short time would require a wholesale reshuffling of China’s export sourcing. While China could meet the targets by requiring firms to shift purchases to the United States, the pact appears to rule this out: “The two sides acknowledge that purchases will be made at market prices based on commercial considerations.” Such a move would also violate China’s commitment to evenhanded treatment under its World Trade Organization treaty. But the underlying point remains. Any substantial step up in Chinese purchases would represent a welcome boost for U.S. exporters, one they could meet without sacrificing sales to other markets.

How domestic and foreign suppliers respond to higher U.S. exports to China will affect the benefits for U.S. firms. This will be especially the case for commodities, since prices are determined by the global supply‑demand balance and relatively small shifts in supply can generate large price swings to clear the market.

Consider the case of petroleum. Suppose China switches from buying Saudi Arabian oil to buying oil from the United States, and that U.S. producers respond by shipping oil that would otherwise have gone to Japan, while leaving production unchanged. In this case, the global market price is unaffected. Total U.S. exports would be unchanged, and Japan would end up buying oil from Saudi Arabia rather than the United States.

But suppose instead that U.S. producers respond to increased Chinese demand by ramping up production, and that Saudi Arabia doesn’t reduce its own production. The result would be a global supply glut, driving down prices for all producers. Indeed, U.S. firms would face lower prices on both domestic and foreign sales. And while U.S. oil exports would increase in volume terms, oil export revenues might well decline. Another implication of this price decline: China would need to buy even more U.S. oil to meet the Phase One energy import target, given that it is defined in nominal dollar terms.

The story is the same for agricultural products such as soybeans (the largest U.S. farm export to China). If China buys more soybeans from the United States and fewer from Brazil, the global market outcome will depend on how much U.S. farmers ramp up production and on how Brazilian farmers respond.


The COVID‑19 pandemic has also altered the way in which increased sales to China would ripple through the U.S. economy. The early chapters of undergraduate macroeconomics textbooks show how an initial increase in demand, say from higher government spending, can result in a considerably larger increase in GDP. Companies meeting an increase in export demand will earn additional profits and have more room to make additional wage payouts to their workers. Total spending will rise by more than the initial demand injection as companies and workers deploy this additional income. In this sense, the process for exports is essentially the same as the familiar fiscal multiplier associated with an increase in government spending.

This simple multiplier, however, takes in only the demand side of the economy. Later chapters of the macro textbook show how the eventual increase in GDP is limited by supply-side factors, mediated via the endogenous responses to higher demand by prices, market interest rates, and the value of the U.S. dollar. The policy response to higher demand can also play a role, since the Fed might tighten its stance if it judges that the economy is at risk of overheating. When the economy has no meaningful spare capacity, these forces effectively cancel out the GDP boost from higher demand.

Empirical studies bear out the thrust of this textbook analysis. Auerbach and Gorodnichenko, for example, find that the multiplier from higher government spending is 1.5 to 2.0 during recessions and less than 0.5 during expansions. Similarly, a recent review of the literature from the San Francisco Fed finds that fiscal stimulus would provide a sizeable knock-on boost to GDP given the current depressed state of the economy.

These findings point to a similarly large current boost from increased export sales. Recall that the Phase One agreement calls for China’s purchases of U.S. goods and services to rise by roughly $125 billion by 2021—an amount equivalent to 0.6 percent of U.S. GDP. As we’ve discussed, the actual addition to GDP will depend on two factors: the extent of trade diversion and the magnitude of the export multiplier. Given economic conditions prevailing when the pact was signed, trade diversion would likely have been substantial, and the multiplier well short of 1. Today, trade diversion would likely be minimal, and the multiplier as high as 2.

The U.S. government is still optimistic about the Phase One deal. While the 2021 targets seem unattainable, it remains true that Chinese authorities could direct import purchases toward U.S. goods and services. In the current depressed environment, an increase in U.S. exports to China due to the deal would bring a larger knock-on boost to the U.S. economy than could have been expected when the package was announced.

Matthew Higgins is a vice president in the Federal Reserve Bank of New York’s Research and Statistics Group.

Thomas Klitgaard is a vice president in the Bank’s Research and Statistics Group.


Matthew Higgins and Thomas Klitgaard, “Reconsidering the Phase One Trade Deal with China in the Midst of the Pandemic,” Federal Reserve Bank of New York Liberty Street Economics, August 5, 2020, https://libertystreeteconomics.newyorkfed.org/2020/08/reconsidering-the-phase-one-trade-deal-with-china-in-the-midst-of-the-pandemic.html.

The 5 biggest bombshells from the Harry and Meghan Oprah interview

In Casa By Paboy in Naples, Italy