The answer to the “whither-cities” question that’s buzzed around the edges of pandemic punditry was never seriously in doubt. Cities are humanity’s sturdiest invention. They’ve endured deadly plagues, lethal bombings, depressions, terrorist attacks, floods, hurricanes… the gamut. COVID-19 will not become the exception. Cities filled with people will continue to exist once the virus has been eradicated.

Still, the past nine months has felt a bit like living inside a dystopian snow globe that’s been given an exceptionally violent shake; all the flakes will eventually settle out, but not as before. Indeed, by the time most people have received vaccinations — six or nine months hence — the manifestations of resilience that surfaced early on in the pandemic will solidify into new ways of being and living in the city, leaving us to consider what becomes of the systems, communities, and infrastructures that turned out to be far more fragile than most people realized.

For much of this surprisingly weird year, Spacing, Spacing.ca and Spacing Radio — together with partners including the Canadian Urban Institute, Evergreen, and Massey College — have sought to report on what civic resilience looks like, in terms of housing, transit, food security, culture, civic spaces, and even public bathrooms. 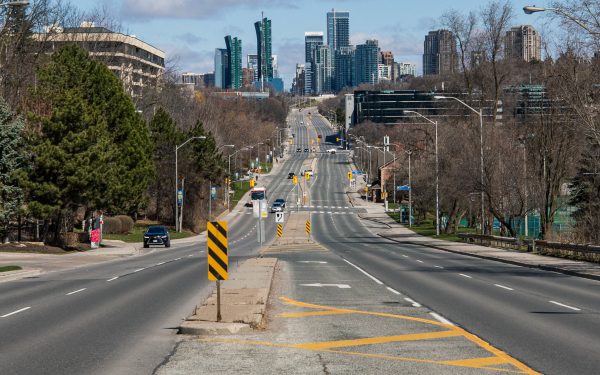 If I had to choose the most resilient system to have emerged in the pandemic, it would be the digital/wireless infrastructure that was largely in place before March 2020, but has proved to be robust enough to allow millions of people to work from home, shop remotely, learn online, access health care, etc.

This, of course, is a good-news-bad-news story, with plenty of examples of the latter (fake pandemic stories, the dissemination of anti-mask/anti-vaccine hysteria, etc.). But I’d say there’s more positive than negative here, and, if anything, our society’s now extreme reliance on information technology translates into a very specific post-pandemic municipal public policy goal, which is providing equitable access to digital infrastructure to all communities, not just those inhabited by people with the means to afford a laptop, a smart phone and a wifi connection.

Yet it’s clear that remote shopping, medical appointments and working won’t disappear with the end of the pandemic. Yes, people will go back into stores, classrooms and their workplaces, but this technology toothpaste isn’t going to go back into the tube anytime soon.

In all cases, individuals will be weighing the social appeal of working, learning or shopping in person against the cost in terms of the time and expense of commuting, waiting in check-out lines, etc. In the aggregate, those choices will leave trace marks on the city’s retail strips, malls, schools, and office complexes.

I don’t believe we’ve truly reckoned with the huge overhang of non-residential physical space created by all the new virtual spaces that emerged during the pandemic. But that surplus will leave its mark, on the books of property managers, the membership rosters of BIAs and the City’s commercial tax base. 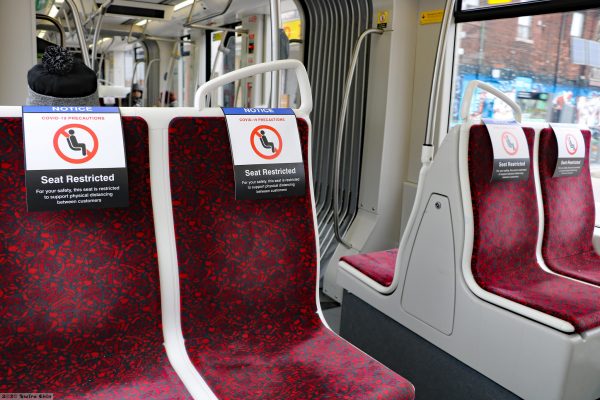 Because public transit and work are so connected, the pandemic has exposed a vast vulnerability in a key part of the City’s transportation infrastructure and, therefore, its finances. Transit has long been premised on the needs of commuters, with the lion’s share of the TTC’s capital serving the needs of office/white collar workers.

The system’s usage through the pandemic inverted that equation: the most over-taxed routes were suburban bus lines, which operated with chronic over-crowding despite the TTC’s efforts to add service if capacity exceeded safe ridership levels. The subway and streetcar lines, which serve the city’s affluent areas, saw their ridership collapse as commuters readily shifted to working from home.

There’s been a fair amount of commentary and research showing that transit has not been a vector of contagion during the pandemic. Yet those assurances, plus expanding vaccination, won’t bring riders back in the same numbers as pre-pandemic. The fate of the TTC, like most urban transit systems, will be in the hands of employers and white-collar workers who in tandem will re-calibrate the work-week and the demand for office space, both of which will impact fare box revenues.

For now, the City has managed to secure some federal and provincial funding to compensate for the precipitous drop in ridership. But I wouldn’t assume that a return to normalcy means a quick return to the halcyon days, when the TTC carried 530+ million riders a year. The size of the TTC’s operating shortfall will balloon, and spill over into the City’s budgetary politics, forcing city council to make hard choices about the size of the TTC’s annual subsidy, its expansion plans, and revenue sources. Those fights won’t happen next year, but they’re coming.

MORE ON THIS TOPIC:
• Spacing Radio 050: Toronto transit in the pandemic 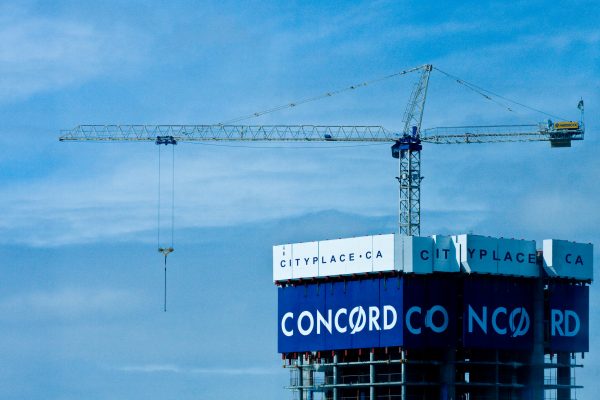 The higher prevalence of COVID-19 infection rates in low-income, racialized, and inner-suburb neighbourhoods, now exceedingly well documented, can be read in part as (yet another) indictment of the City’s affordable housing and planning policies. The infection spread rapidly in over-crowded apartments, whose residents mostly couldn’t shift to remote work and were thus doubly exposed, in both their homes and workplaces (health care, front-line retail, food processing, etc.).

“Build back better” is a slogan we’re going to hear until it loses every last shred of meaning. But in the case of the City’s housing and development policies, the conclusions and learnings should be crystal clear.

First, and foremost, the proliferation of new downtown development applications and an apparent uptick in investor interest in new condos does not a solution make. We’ve been building the wrong housing, in the wrong places, based on the wrong form of tenure, for decades, even as we boast about cranes in the sky. The pandemic, in a matter of mere months, revealed that that formula shatters lives.

The second and related point is that the City needs to find a way to bring a great deal more purpose-built, non-luxury multi-unit rental housing onto the market. The Housing Now initiative at least gestures in that direction by developing affordable units on city-owned land. But the mayor has allowed local councillors like James Pasternak and Anthony Perruzza to nitpick some these proposals, including, recently, a plan to add density along Finch Ave West, of all places.

Finally, the high incidence and risk of COVID transmission in Toronto’s shelters drove hundreds of homeless people into the city’s parks, where their encampments speak to not only the well-known inadequacy of these facilities, but also the extreme vulnerability of the individuals who depend on them.

Council has taken emergency steps, including securing hotel rooms and ordering up the development of two quick-build modular supportive housing projects. The latter represents the way forward: inexpensive to construct, with humane conditions for residents. The shame of it is that the city had to prevail on the provincial government to issue a ministerial zoning order to expedite approvals.

Such projects should have been standard years ago. Now, there’s no excuse. 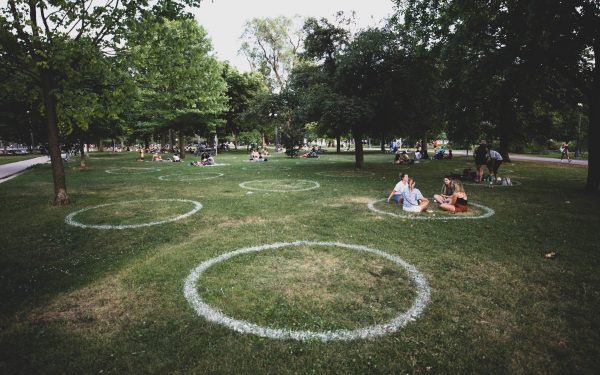 One way to think about resilience is to acknowledge the role of latent or unused capacity. Back-up systems, fail-safes, reserve funds, land banks. Who doesn’t look sideways at a rainy day fund from time to time? But when the rainy day does come, as it inevitably does, you are grateful for the safety net.

There’s no question the City’s abundant and somewhat under-used park and ravine systems provided a much-needed cushion/relief valve for tens of thousands of Torontonians. With so many people unable to shop or sit in a bar or go to the gym, the parks provided space in meaningful and frequently innovative ways. I am still astonished at how many evolved into impromptu yoga studios, boot-camps, picnic grounds, and spaces for casual meetings. Even as winter sets in, I’ve seen more kids on playgrounds and people playing basketball or tennis on freshly-shovelled courts.

This new-found non-commercial outdoor world has expanded to include porches once used mainly to store bikes and bins, yards with a couple of chairs out front, and even unused swaths of land along hydro corridors. Absent the usual diversions, more people, it seems, have come to regard public space as a destination, and not just the geography between one building and another.

The municipality, in turn, discovered latent public space capacity on sidewalks and curb lanes in many parts of the older city. Yes, Toronto officials and councillors had to be badgered and shamed into action early on in the pandemic. But the re-purposing of both amenities, into long-opposed bike lanes and curbside patios, revealed how a bureaucracy and council that is culturally averse to rapid change managed to step back and allow new public spaces to germinate.

This narrative is not all rosy, of course. There has been back-sliding here and there, and Toronto’s approach to re-engineering streets is still way behind cities like Paris and Berlin. Still, credit where credit’s due. What’s key, however, is for the City not to revert to its old ways.

It’s said that pandemics and other large-scale crises tend to make societies more progressive; certainly, the 1918-1919 Spanish flu gave rise to a decade of forward-looking health and social policy in Canada. The post-pandemic city will be here and still standing in 2021, but also different in fundamental ways — ideally more flexible, more conscious about societal risk, less fixated on the bottom line.

Going backwards should not be an option.

COVID-19 update for March 3: Here’s the latest on coronavirus in B.C.

Strata Depreciation Reports: What REALTORS® and Clients Need to Know