Schoolteacher Gertrude Lawson was mid-career when she designed and oversaw construction of her West Vancouver manor in 1939, among the few single women in British Columbia to ever hold a mortgage at that time.

Within the Scottish-style stone walls subsequently erected at 680 17th Street, Miss Lawson (as she was known to her many students) would harbour aging family members, rent rooms to an assortment of tenants, and host decades of social and artistic gatherings.

Born in Donald, B.C., in 1892, Gertrude Isobel was the middle child of John and Christina Lawson. She was 15 years old when her family vacated their residence in Vancouver and boated across Burrard Inlet to the base of the North Shore mountains, moving into a wood-frame house built by “Navvy Jack” Thomas in 1907. Her father planted holly near a stream—or “burn” in Gaelic—and named the residence Hollyburn. John went on to establish a real estate business, ferry service, and post office, garnering the title “Father of West Vancouver.”

The Lawson family and two dogs on a bridge crossing Hollyburn Creek. Image courtesy of the West Vancouver Archives.

In 1909 Gertrude enrolled in a teacher training program at the Normal School in Vancouver with her older sister, Elizabeth. Following graduation, the Lawson clan, including youngest member Duncan, took a three-month trip to Scotland, where they visited relatives and toured the region, the stone castles capturing Gertrude’s imagination.

The sisters’ destinies diverged when they returned to Hollyburn, Elizabeth marrying William Pitman in 1914 and Gertrude pursuing a teaching career. “My plan to teach in a new location as often as possible was thwarted by World War One,” Gertrude wrote years later. “When our menfolk went overseas, I was needed at home.” 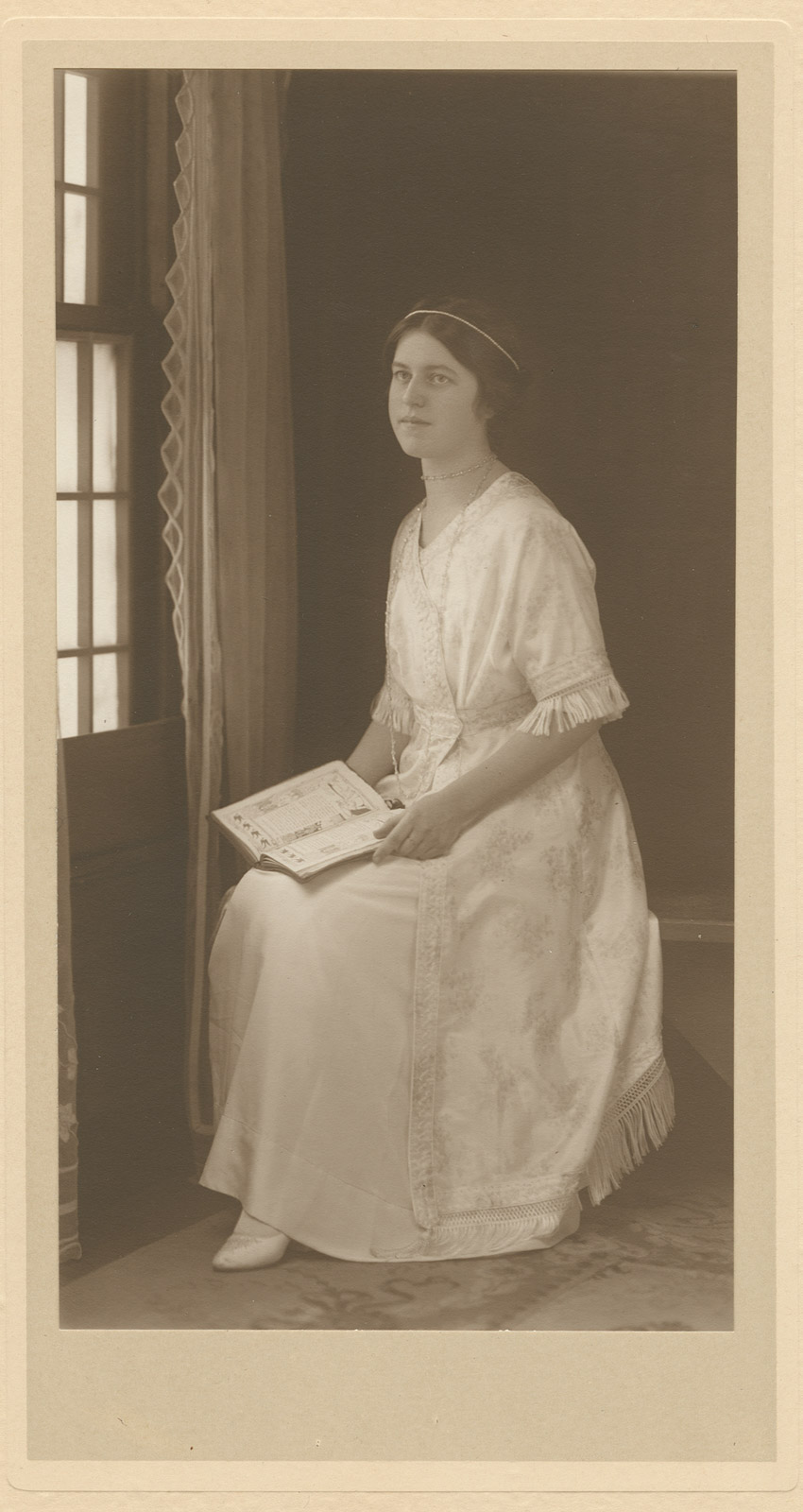 Gertrude Lawson, circa 1913. Image courtesy of the West Vancouver Archives.

Duncan had enlisted in the Great War in 1916, and John joined up a year later, at age 57; tragically Duncan was killed on September 28, 1918. Gertrude was away from Hollyburn when she received the news. In a letter dated November 26, 2018, from her father, who was still overseas, he consoled her, and expressed concern for her own health.  “I … was sorry to see that you had had such a spell of the Spanish flu as I have no doubt it was. How fortunate that you had such a good nurse, but how hard that you should have to bear such a terrible blow when you were so weak.” 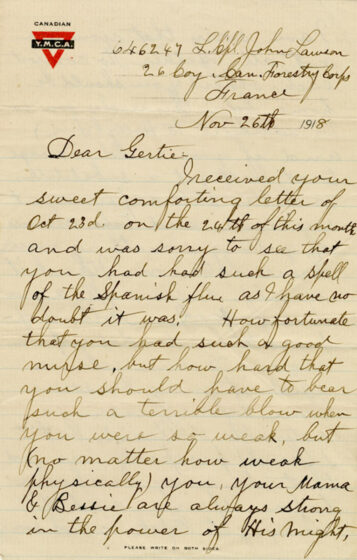 A letter written by John Lawson to Gertrude from France during the First World War. Image courtesy of the West Vancouver Archives.

Despite the millions of lives claimed by the Spanish flu around the world, Gertrude recovered and returned to Hollyburn, having taught during the war years in Barkerville, Squamish, North Vancouver, and Naramata. Once home, she continued to teach, first at Hollyburn School and then settling at Pauline Johnson Elementary, where she earned a reputation as a dedicated, kind, and firm teacher.

With the war and the pandemic now an unpleasant memory, Gertrude took a trip around the world in 1924 with her colleague Mabel McPhie, exploring Europe, the Middle East, Southeast Asia, China, and Japan.

She took another risk five years later on the eve of the Great Depression, when she purchased land at 17th Street and Esquimalt Avenue.

A decade later she invited two female colleagues to invest with her in the construction of a house on her land. They initially agreed then backed out, possibly apprehensive because of rising political tensions in Europe. When Canada went to war in September 1939, Gertrude remained determined to build her two-storey house, even if it meant doing so on her own.

The exterior walls of her slate-roofed manor were sheathed in local Capilano River rock and granite from New Zealand. John had planned to build his own dream house and now gave his daughter the salvaged granite used as ship’s ballast. In 1940 Gertrude moved into her new home, along with her parents, a second kitchen built for their use. 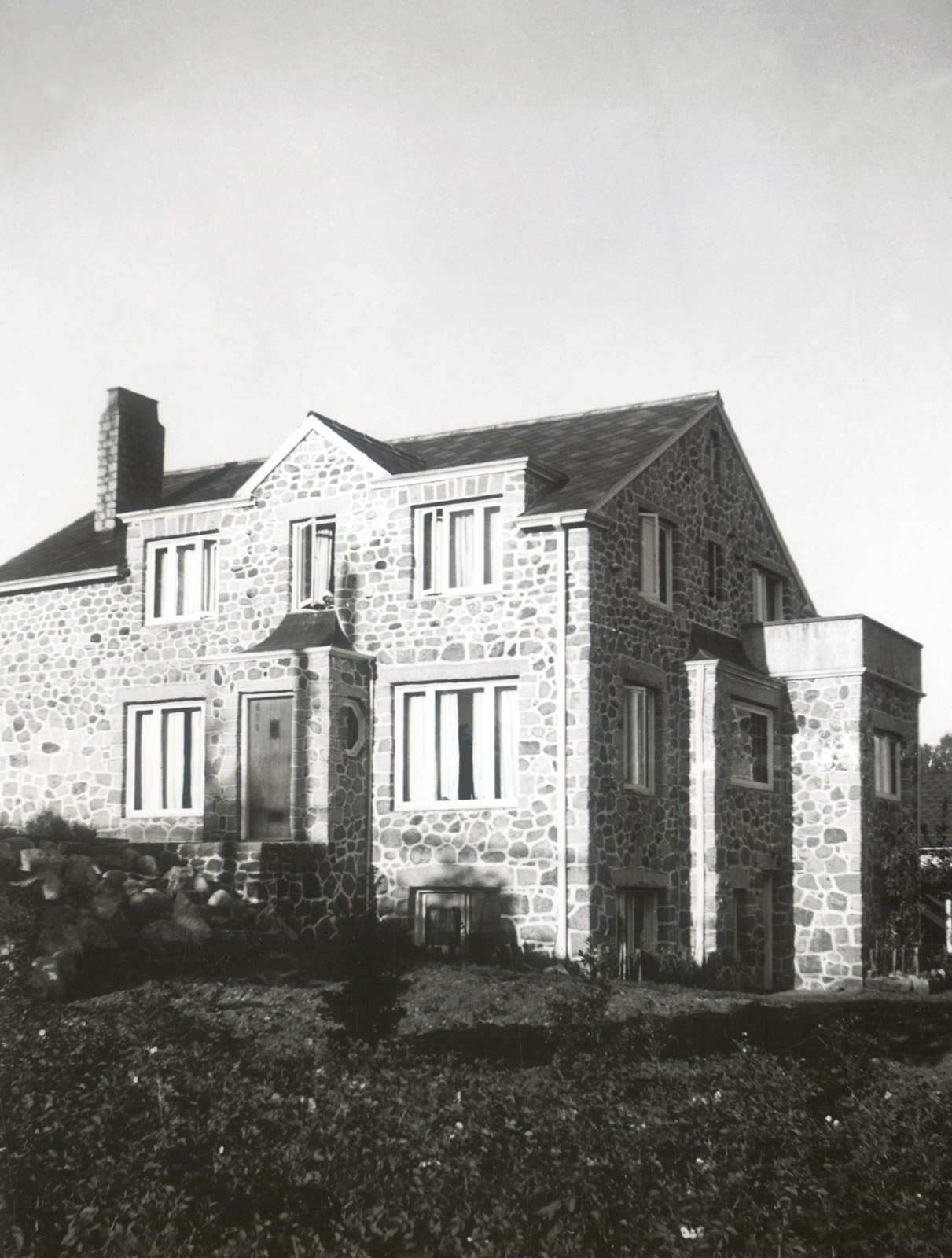 The interior had four bedrooms, three bathrooms, a study, and studio, as well as a basement. At the heart of the home was the living room, with its high ceiling, granite fireplace and hardwood flooring in the style of a ship deck. An ardent dancer and member of the Ladies’ Scottish Country Dance Society, Gertrude had a piper’s platform built in the corner, with floor space for three sets of Scottish country dancers. Her cat and dog roamed a yard with an English-style garden, holly hedge, and English oak tree.

The Lawsons enjoyed gardening and family gatherings, John aiding in the war effort as a rivet sorter at the North Vancouver shipyards. A widowed aunt also moved in. Gertrude rented out suites and bed sitting rooms with hot plates to “ladies of gentle birth who are finding it difficult to maintain a home of their own.” The reasonable rates attracted artists, teachers, and other women on low incomes, and likely came in handy later to supplement Gertrude’s own pension after her retirement in 1952.

A learner as much as a teacher, Gertrude never let her birth defect—a withered right hand—discourage her creative pursuits, though she sometimes covered her hand with a handkerchief when posing for photos. As an artist, her landscapes in oils and watercolours, such as The Lions, Whycliffe Park and Morning on Mount Edith Cavell, were exhibited at the Vancouver Art Gallery throughout the 1930s. She also wrote stories and poetry, played the violin, and offered private violin lessons, in addition to teaching art appreciation classes in local schools. 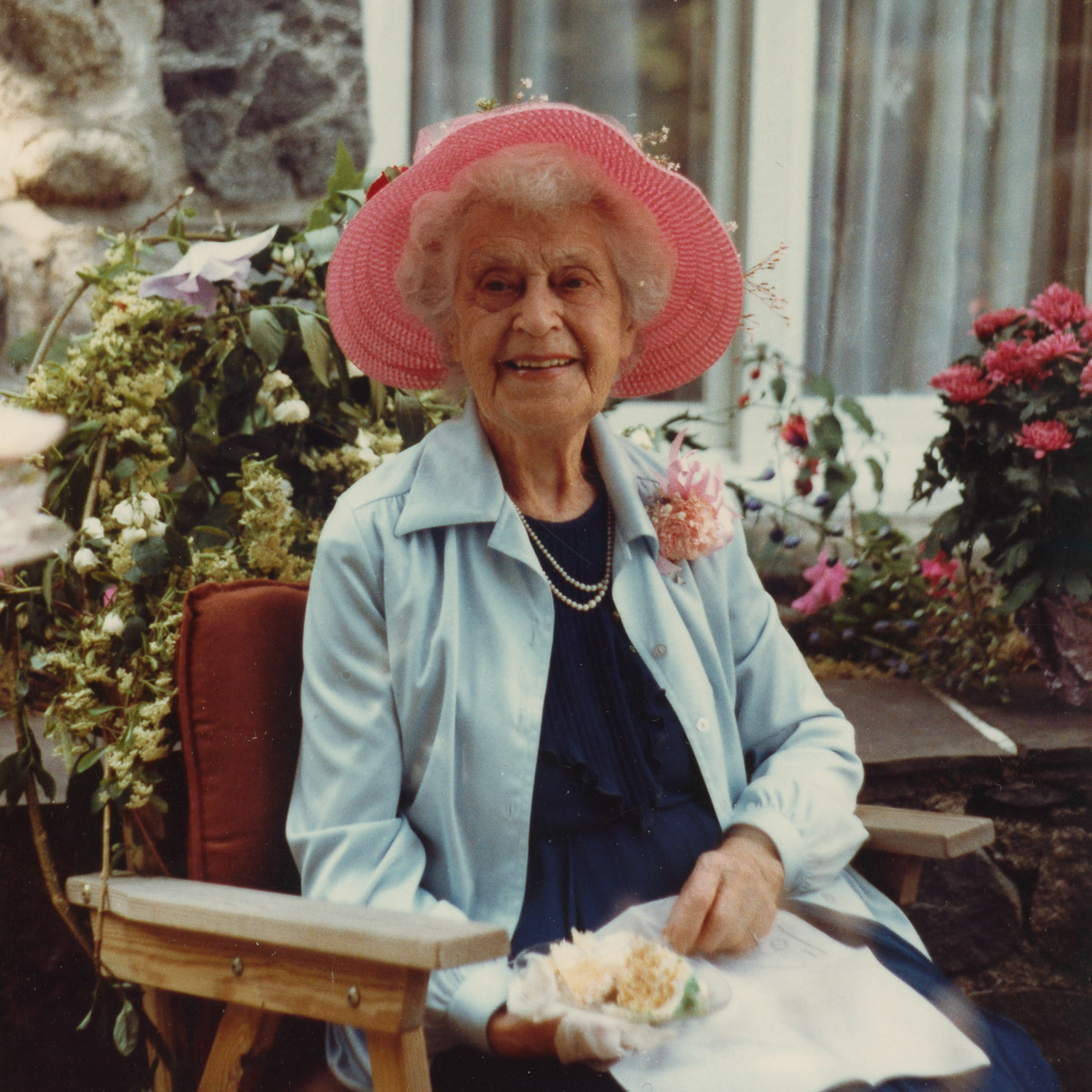 Gertrude, at her 90th birthday party in 1982. Image courtesy of the West Vancouver Archives.

“The best reward for service lies in the enrichment of our own living through varied relationships and experiences, friendships and the approval of our own inner court of appeal,” she once wrote in an unpublished essay on teaching.

Well into her senior years, Gertrude was still hosting tea parties on her lawn in the summer months and, at 76, signed up for a writing class.

When she died, age 96 in 1989, she left behind nieces Gertrude Wilson and Nancy Majoribanks, and a nephew, Duncan Pitman. The municipality purchased her property the following year and, after renovations, reopened the house to the public in 1994.

Today the West Vancouver Art Museum and Archives (also known as Gertrude Lawson House, now a designated heritage property) is a hub of community events, with an art gallery on the main floor and, around the side, a door to the basement, where a small room houses more than 500 archival documents, revealing much of the Lawson family’s history and the remarkable story of Gertrude and the stone house she built.

Calling all content creators: this organization is giving away $20K grants to aspiring creatives