An artist’s rendering of a proposed Telus project at 400 Fitzwilliam St. in Nanaimo. The view is from Wallace Street | Photo: City of Nanaimo

Telus and partner Omicron are proposing a $70 million project with 197 rental units in Nanaimo’s Old City Quarter as public and private sector investment indicates the city’s construction sector is already shaping up to have another strong year.

“We are seeing a trend this year toward public investment,” Jeremy Holm, Nanaimo’s director of development approvals, said Tuesday.

Despite the pandemic, Holm anticipates this year’s building permit value will be similar to 2020 which reached $243 million. Of that, $203.8 million went to residential construction.

Up to 65% of new housing is being built as rental to respond to demand, Holm said.

Interest in investing in Nanaimo is coming from off-Island developers, including Alberta, Manitoba and Ontario, he said.

Construction continues at 100 Gordon St. in downtown Nanaimo where Utah-based PEG Development is building a long-awaited nine-storey hotel on what had been city land. It will add 172 hotel rooms to the core.

Public monies are being invested in a new $157-million Nanaimo Correctional Centre. An intensive care unit at ­Nanaimo Regional General Hospital has a construction value of $21.3 million. A $10 million building permit has been taken out for the city’s new fire hall and school upgrades are on the agenda.

B.C. and Nanaimo announced in mid-2020 that they are partnering to bring more than 300 affordable rental homes for individuals, seniors and families, as well as new permanent, purpose-built supportive housing for those without homes.

Artist’s rendering of proposed Telus project for Nanaimo at 400 Fitzwilliam St. View within the residential courtyard looking toward Wallace Street. Via City of Nanaimo

Nanaimo’s Mid-Town Gateway Project to ease traffic congestion and improve safety at Bowen and Northfield roads is sparking investment. The city agreed to sell surplus lands to Island West Coast Developments which is planning a $75 million project with a 175-unit housing development, grocery store, and retail and office space.

“That’s pretty significant. It is quite an addition to that area and a big transportation network improvement,” Holm said. “We can see it triggering off quite a bit of development in that area.”

It will be the first significant commercial and multi-use project in recent times in that part of the city, he said. Holm expects a rezoning application will be submitted to the city shortly.

Residential projects already underway or in the application and planning stages include social housing and seniors units, rental and condominiums in multi-family buildings, and single-family homes, often with secondary suites.

“We’re are hopeful that there is a balanced investment in ­projects that will support all the housing needs across the ­continuum,” Holm said.

The Telus Living Nanaimo proposal would be one of the city’s largest rental project, Holm said. Up to 500 residents would live at 400 Fitzwilliam St.

This proposal would see 1.75 acres subdivided off Telus’ existing 2.75 acre property, where it has its Nanaimo office. Development permit and subdivision approvals are needed.

Units would rent at market rates, not yet set, said Pablo Yuste, architect and principal at Omicron, which is providing development management, design, engineering, and construction management.

“This project is strategically focused at the middle rental market as this is the area that is currently underserved,” he said in an email.

The proposed two six-storey buildings, covering 164,000 square feet, would be connected through landscaping and a public realm plan would animate street frontages at Wallace, Wentworth and Richards streets.

Features include accessible and adaptable units allowing tenants to age in place. It would also have chargers for electric vehicles and infrastructure for future installation.

Construction cost is pegged at $50 million, with the remaining $20 million going to other project-related costs, Yuste said.

Nanaimo would receive $2 million in development fees and the project is expected to create between 650 to 700 jobs.

Omicron is hoping for development permit approval this spring. Construction would take approximately 24 to 30 months, he said. 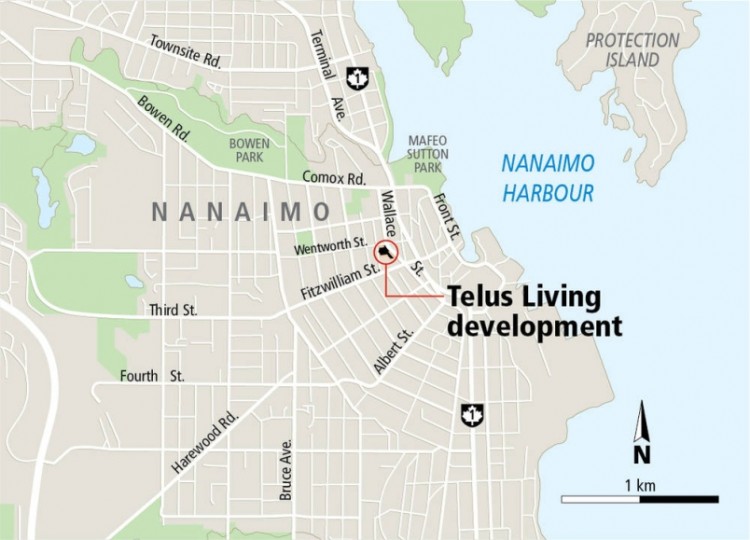 Other housing projects include a two-building, 79-unit development on Haliburton Street on the city’s south end by Parkshore Projects Ltd. Approved this month, it follows a similar project next door by the same developer. A private 149-unit seniors housing project is planned, subject to development permit approval, at 388 MachLeary St. in the old city area.

Woodgrove Seniors Housing Society is developing a 149-unit affordable seniors housing project on Seafield Crescent near the hospital. A building permit application is with the city.

A non-profit society is behind a 159-unit affordable seniors project at 10 Buttertubs Dr.

Nanaimo is also seeing an 87-unit building at 550 Brechin Rd. and a 170-unit project at 4800 Cedar Ridge Pl. among new projects in the works.

If Harrison Can Have A Fountain In A Lagoon, So Can Abbotsford – At Mill Lake – FVN

send letters to a galaxy far far away with the US postal service star...

Snowfall Warning Saturday – 20 to 25cms For Coquihalla and Highway 3 Hope to...