Editor’s note: Since this post was first published, we have corrected a description accompanying the Variable Capital Buffer graphic — Currently, with a countercyclical capital buffer set to 0, the combined minimum and buffer CET1 requirements range from 7 percent to 10.5 percent. (October 6:10 p.m.)

By many measures the U.S. banking industry entered 2020 in good health. But the widespread outbreak of the COVID-19 virus and the associated economic disruptions have caused unemployment to skyrocket and many businesses to suspend or significantly reduce operations. In this post, we consider the implications of the pandemic for the stability of the banking sector, including the potential impact of dividend suspensions on bank capital ratios and the use of banks’ regulatory capital buffers.

Before we can consider how regulatory policy can bolster the ability of banks to lend through the crisis, we need projections that capture the potential outcomes for banks. The Federal Reserve Bank of Minneapolis and a Hutchins Center working paper considered the effect of severe scenarios on bank capital. Most recently, the Federal Reserve released sensitivity analyses to capture the current crisis in its annual disclosure of stress test results.

We have conducted our own analysis to understand the impact of macroeconomic scenarios on bank performance. We considered two scenarios that cover distinct possibilities for the course of the outbreak. The first is a “V-shaped” scenario, in which economic activity plunges sharply in the second quarter of 2020 but rebounds quickly in the second half of the year. The second is an “L-shaped” scenario in which economic activity plunges more deeply than in the V-shaped scenario and recovers very slowly over the next three years.The scenarios use the fourth quarter of 2019 as a jumping-off point, so do not incorporate actual economic developments during the first half of 2020. Instead, they are intended to span a range from moderate to significant negative pandemic-related outcomes for the economy as the basis of our analysis. Scenario variables include real GDP, unemployment, stock prices, residential and commercial real estate prices, and credit spreads. The charts below shows the path of real GDP and the unemployment rate under the two scenarios.

We then use these scenarios to project bank profitability and capital. To do so we use the Capital and Loss Assessment under Stress Scenarios, or CLASS, model that is a simplified capital stress test model based on publicly available regulatory reports (FR Y-9C) data. The model uses the historical relationship between components of net income and macroeconomic variables such as real GDP growth, the unemployment rate, interest rates, stock prices, real estate prices, and credit spreads. The last historical date for our analysis is the fourth quarter of 2019 and the stress test horizon is the nine quarters starting in the first quarter of 2020 and ending in the first quarter of 2022. 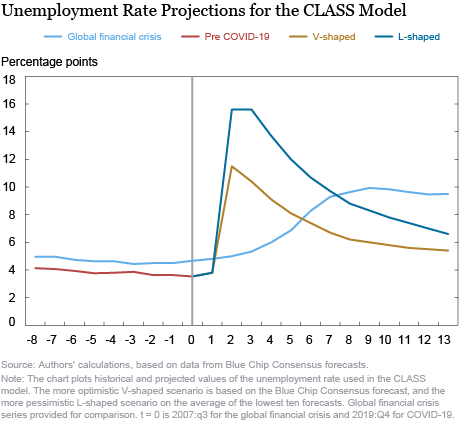 How Do Dividends Impact Capital Ratios?

In our projections, we assume that banks maintain repurchase suspensions throughout the projection period (currently the Federal Reserve has restricted repurchases only for the third quarter of 2020). For dividends, we examine two alternatives: banks maintain dividends at their fourth quarter of 2019 levels or banks set dividends to zero starting in the first quarter of 2020. Banks paid dividends during the first and second quarters, and the Federal Reserve has limited dividends only to the average of the latest twelve months of net income. Thus, both of our assumptions are counterfactual but they enable us to generate an upper bound on the impact of dividends on capital ratios.

The chart also shows how much dividends matter. The red and gold lines in the chart show the path of the CET1 ratio when we assume that banks suspend dividends during the stress test horizon. In both scenarios, the drop in the CET1 ratio is more muted and the recovery more pronounced than when dividends are paid. By the end of the stress test horizon, both of the projected CET1 ratios are 150 basis points higher when we assume that banks suspend their dividends rather than continue to distribute capital to shareholders. 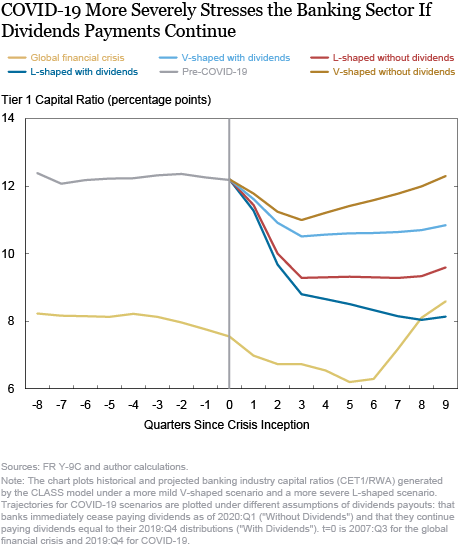 Banks’ regulatory capital requirements have two components: a minimum threshold and a series of “buffers” on top of this minimum. Banks with capital ratios falling below the minimum threshold could be subject to resolution. Banks with capital ratios that are in the buffer (that is, above the minimum but below the minimum plus the buffer amount) face increasingly stringent restrictions on dividends, share repurchases, and discretionary compensation the closer capital gets to the minimum threshold. For CET1 ratios, the minimum is 4.5 percent while the buffer consists of up to three components: an “always-on” capital conservation buffer of 2.5 percent, a time-varying countercyclical capital buffer that can range between 0.0 percent and 2.5 percent depending on financial and economic conditions, and, for the largest and most complex banking companies, a G-SIB surcharge of up to 3.5 percent. Currently, with a countercyclical capital buffer set to 0, the combined minimum and buffer CET1 requirements range from 7 percent to 10.5 percent. Typically, banks endeavor to maintain capital ratios above the minimum plus buffer level to avoid restrictions on capital distributions and compensation, as well as supervisory scrutiny. 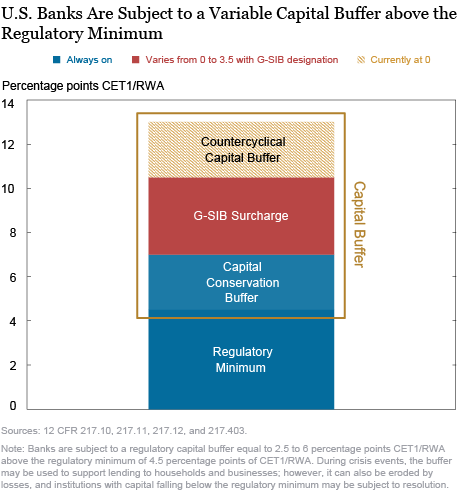 Since the onset of the COVID-19 pandemic, supervisors have encouraged banks to allow their capital ratios to drop into the buffer to enable additional lending to support consumers and businesses and thus the broader economy. On March 17, the three federal banking regulators released a statement that they support “banking organizations that choose to use their capital and liquidity buffers to lend and undertake other supportive actions in a safe and sound manner.” The idea is that banks would reduce their buffers due to expansion of the denominator of the capital ratios—risk-weighted assets, in the case of the CET1 ratio—reflecting the increase in lending. Since the capital ratios of most banks are well in excess of the minimum CET1 plus buffer threshold, expanding assets sufficiently would imply a very substantial increase in lending.

However, as we’ve shown, banks could face very substantial losses due to the COVID-19 outbreak. These losses imply a reduction in common tier 1 equity, the numerator of the capital ratio, and reductions of the ratios themselves that could limit banks’ ability to expand lending, even if they were willing to dip into their buffers.

We use our CLASS results to generate a rough estimate of how much their ability to expand lending could be reduced due to COVID-19-related losses. To do this, for each of the scenarios, we

This calculation gives us the share of the CET1 buffer that would be “used” by reductions in the numerator of the CET1 ratio. 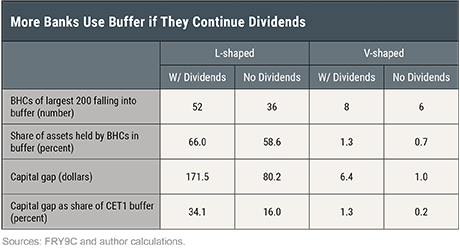 The ability of banks to support lending to consumers and businesses will be affected by the extent of losses they face and the amount of capital they have after absorbing those losses. Our CLASS model projections suggest that dividends are an important factor in determining whether the U.S. banking industry would have sufficient capacity to absorb losses and expand lending. In particular, when we assume banks suspend dividend payments, we find that they are less prone to meaningfully reduce their capital buffers and thus have more room to increase lending. This is true under both optimistic and pessimistic assumptions about the path of the economy during the COVID -19 outbreak.

Madeline Finnegan is a former senior research analyst in the Federal Reserve Bank of New York’s Research and Statistics Group.

Sarah Ngo Hamerling is a senior research analyst in the Bank’s Research and Statistics Group.

Beverly Hirtle is an executive vice president and the director of research at the Federal Reserve Bank of New York.

Anna Kovner is a policy leader for financial stability in the Federal Reserve Bank of New York’s Research and Statistics Group.

Stephan Luck is an economist in the Bank’s Research and Statistics Group.

Matthew Plosser is an officer in the Bank’s Research and Statistics Group.

Masses of Venezuelan Migrants Arrive at the Southern Border

How to Talk to Your Family About Your Taxes