Tucked among the apartment buildings of the West End, in the middle of what’s now called Barclay Heritage Square, sits a hidden gem of a Victorian home that even the neighbours tend to walk by. But inside the Roedde House, now a museum, lies a snapshot of another era, of early Vancouver—and a victory in the early battle to preserve heritage homes here. In this story from our archives, contributor Jesse Donaldson retraces the history of the Roedde family, and the house they built.

The Roedde House Museum is such a hidden gem that even many of its neighbours don’t know what’s inside.

“I’ve lived here since 1989,” chuckles volunteer docent Barry Brisebois, who has spent the past handful of years leading tours through the turn-of-the-century house. “I live just a few blocks away, and I used to walk past it every day on my way to work—but I’d never been inside until five years ago.”

But for those lucky enough to have stumbled upon it, the 2,400-square-foot building—which turned 125 years old in 2018—offers a look into the city’s past, showcasing not just the evolution of the West End, but the day-to-day lives of Victorian-era Vancouverites. The structure is said to have been designed by infamous architect Francis Rattenbury (who would go on to design Victoria’s Empress Hotel and provincial parliament, among other notable structures), and in its 100-plus years, it has gone through a number of incarnations: a family home, a dilapidated rooming house, and finally, after being saved from the wrecking ball, the city’s first “house museum”—a space for community events, concerts, and weddings, and a regular location for films and television shows.

Gustav and Matilda Roedde, for whom the house was built in 1893, weren’t rich or famous, and they weren’t considered particularly notable in the annals of local history. Nonetheless, their story is deeply intertwined with the growth of early Vancouver.

The pair arrived here from Europe in 1888, with daughters Emma and Anna Henrietta in tow. Gustav was a bookbinder by trade, and spent a portion of that first year working for the Vancouver News Advertiser, one of the city’s earliest newspapers, before personality clashes with owner and editor Francis Carter Cotton forced him to move on (“both men [were] too dominant in their character,” Gustav’s son William would later tell city archivist J.S. Matthews). His bindery—established above a butcher shop at 36 Cordova Street shortly thereafter—was the city’s first, and his work was highly regarded by Vancouverites of the day, bringing in such high-profile clients as Hudson’s Bay Company, the Canadian Pacific Railway (CPR), and Woodward’s.

“Apparently, bookbinding was a good business to be in,” guide Brisebois says, “because six years after they arrived, he had this place built.”

In 1890, before the Roeddes had even purchased the property, their four-year-old daughter Anna Henrietta died suddenly, after eating poisonous berries. Nonetheless, by the mid-1890s, surviving daughter Emma had been joined by brothers William and Gustav Jr. (and other siblings followed, including another sister named Anna Catherine). As the years went on, the family business flourished; an advertisement in a 1903 edition of the Vancouver Daily World read, “Hello! Roedde? Yes, always READY for all classes of bookwork!”

Records show that Matilda purchased the lot at 1415 Barclay Street from George Black in March of 1893. And while there is no paper evidence of Rattenbury’s involvement in the design of the house, multiple family members have recalled Roedde and Rattenbury’s professional relationship (they worked only a few blocks from one another during Rattenbury’s brief stint in Vancouver). Built in the Queen Anne Revival style, the house’s most notable feature was its prominent turret—a design flourish often attributed to Rattenbury. From 1893 until 1924, it served as home to the Roeddes. And while the CPR was actively marketing the West End as the new community of Vancouver’s upper-middle-class, the family and their neighbours found themselves living a decidedly rustic existence during those early years.

“It wasn’t quite so swanky when they arrived,” Brisebois says with a laugh. “There was no water or electricity. There was an outhouse in the back; they used chamber pots. They had fruit trees. It was like living in the country.”

Over the next 20 years, the Roedde family’s lives were at turns idyllic and tragic. Once the streetcar line along Davie was completed in 1900, Gustav Sr. returned home for lunch each afternoon. Starting at the tender age of nine, Gustav Jr. spent his afternoons hunting with a double-barrelled shotgun, once even taking down a bear on Kitsilano Beach. Matilda used the interior of the house’s signature turret to grow geraniums, sewing in the room below and being treated to an uninterrupted view of Stanley Park and English Bay. Emma spent time sleeping in the same turret, until it was discovered that she was regularly sleepwalking out the third-storey window.

In July of 1909, Emma—by now an adult—was married in the parlour. In January of 1913, the family accidentally set fire to their Christmas tree, causing more than $1,000 in damage. Luckily, by 1913, the bindery was more lucrative than ever; Gustav and his now 70-person workforce (which also included his children) had expanded into a three-storey facility on Homer Street. He had also built a spacious summer home in Horseshoe Bay, with guesthouses and a sprung dance floor.

Then came the First World War.

Gustav and Matilda were holidaying in their native Germany when it was first declared, and when they returned home, they found themselves subjected to serious prejudice from their fellow Vancouverites. Matilda was ejected from her church congregation, and Gustav was forced to hire a Canadian-born floor manager at the bindery for the duration of the war. Even so, the Roeddes remained fiercely dedicated to their adopted country, with Gustav and Matilda’s sons fighting in the war, but on the Allied side. “It was a difficult time for everyone, of course, but for the Roeddes, that would have been particularly confusing,” Brisebois explains. “Luckily, they all came back safely.”

Other family members weren’t so fortunate, however. In 1925, while in her second year as a nurse, Anna Catherine was murdered at Vancouver General Hospital by a schizophrenic patient named Benito Bastello, who slashed her throat with a razor. The following years seem to have been free of tragedy, at least (except for a minor car accident in 1927), right up until Gustav Sr.’s death in 1930; by then, his sons had taken over the day-to-day operations of the bindery that bore their name, and in 1925, the family had sold the house at 1415 Barclay for the princely sum of $6,000. 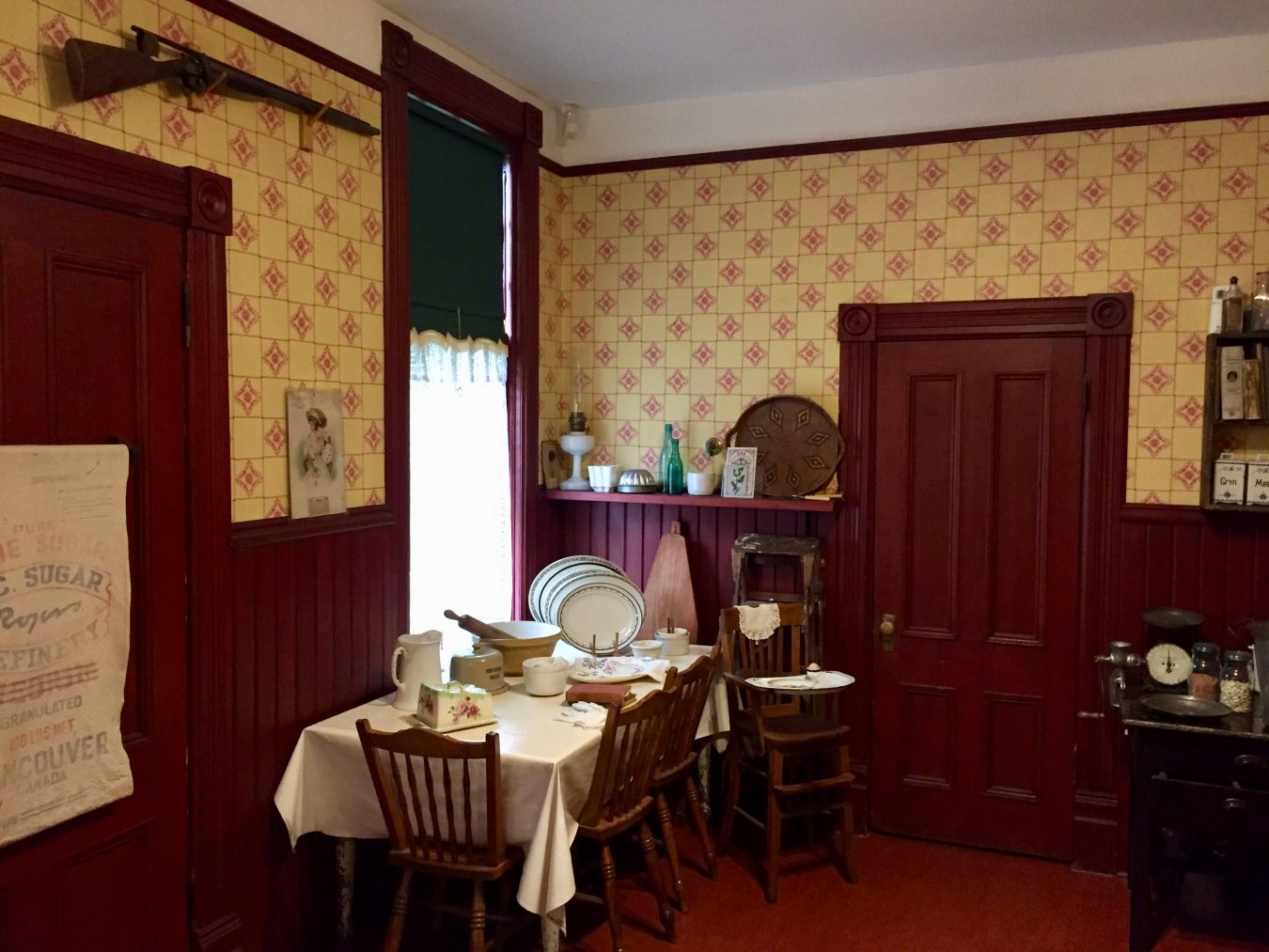 Subsequently, the structure was sold several more times, and in 1935 it became a boarding house known as The Oehlerking Rooms. Its condition deteriorated drastically in the ensuing 30 years, and by 1966, when it was bought by the Vancouver Park Board, it was in a state of extreme disrepair. Like the rest of the houses on the block, the board intended to eventually bulldoze the historic building to make way for green space. Roedde House languished in the decade following its purchase, used as low-cost rental housing and being presided over by landlord Al Thorne and his nine cats. But news of the park board’s plan found its way to local heritage activists, such as painter Janet Bingham and Museum of Vancouver curator Robert Watt, and eventually to high-profile champions such as author Pierre Berton.

“This was only one of many projects that conservationists across the nation were trying to preserve and enhance; but it was unique,” Berton recalled in his foreword to Bingham’s 1996 book More Than A House, which details Roedde House’s history. “It seemed to us then that the Vancouver Parks Board’s idea of what constituted an urban park—a square of scuffed grass with two goal posts at either end—was remarkably narrow in scope. [Heritage Canada chair Jacques] Dalibard’s breathtaking suggestion—that some of the houses should be retained and the park built around them—seemed dangerously radical at the time. As Janet makes clear, it was a real battle to change the politicians’ minds.”

After a protracted series of negotiations, nine of the 17 houses on the 2.3-acre site were ultimately earmarked for preservation, including 1415 Barclay. But following years of neglect, the restoration of Roedde House wasn’t going to be easy. “The house itself was in pretty poor condition when this whole project started,” Brisebois explains. “Luckily, the bones of the house were still in decent shape—things like the pocket doors and a lot of the fixtures were still here.”

The interior refurbishment project began in 1984 (exterior work and structural improvements had been done as early as 1979) and involved a crew of eight, spearheaded by contractor Tom Adair. The team extensively documented the process, stripping finishes off of the cedar panelling, replacing the stained-glass window in the entrance hall, and removing layers of paint and wallpaper to get to the original colours beneath. Modern wiring and plumbing were added, and an additional bathroom was installed in Gustav Sr.’s former den. Much of the restoration was done through the use of historical photographs, as well as the personal collections and memories of surviving Roedde family members. Matilda’s original chair was placed in the upstairs sewing room, and a family heirloom—a lamp depicting Aurora, Goddess of the Dawn—was reinstalled in the front entryway. A shop in Burnaby used photographs to recreate the kitchen’s original wallpaper. And finally, in May of 1990, with work on the first floor completed, the museum opened to the public.

Today, Roedde House survives thanks to the efforts of manager Kelsey Johnson and a group of volunteer docents, including Brisebois. The octagonal parlour is used for a monthly jazz and classical concert series. And so the house remains, perched on its original lot in the middle of Barclay Heritage Square. Surrounded by a lush park and tucked away amongst the apartments of the West End, it is a testament to the tireless work of legacy activists and to the lives of ordinary Vancouverites, an unassuming treasure trove waiting to be discovered—not just by subsequent generations of tourists, but by many of its own neighbours.

“Vancouver isn’t much more than a century old, and it’s hard for some to think of a building as ‘historic’ if it was built after their grandfather’s day,” Berton concludes in his foreword. “That’s why the battle to preserve this famous house and to create a heritage movement on what was once simply ‘Park Site 19’ is such a triumph. It was a long struggle, but those who come after us will be thankful it was won.” That is, of course, once they know it’s there.

This article from our archives was originally published on January 17, 2019. Learn more about Hidden Vancouver.