Workers’ remittances—funds that migrants send to their country of birth—are an important source of income for a number of economies in Latin America, with the bulk of these funds coming from the United States. Have these flows dried up, given the COVID-19 recession and resulting unprecedented job losses? We find that remittances initially faltered but rebounded in the summer months, performing better than during the last U.S. recession despite more severe job losses. Large government income support payments probably explain some of this resilience. Whether remittances continue to hold up is likely to depend on how quickly the U.S. job market recovers, particularly in hard-hit service industries.

A number of countries in Latin America depend heavily on remittances from their expatriate populations. The table below shows remittance inflows last year for Mexico, the Dominican Republic, and countries in Central America, both in dollar terms and as a share of GDP, as well as the fraction of remittance income coming from the United States. Mexico received almost $40 billion in remittance inflows last year, equivalent to some 3 percent of its GDP. Inflows for the other countries, although smaller in dollar terms, were larger as a share of national income, exceeding 20 percent of GDP in El Salvador and Honduras, and near 10 percent of GDP elsewhere. Remittance receipts were significantly larger than foreign direct investment inflows for all these countries; excluding Mexico, they were typically several times as large. Costa Rica and Panama stand out as having minor remittance receipts. 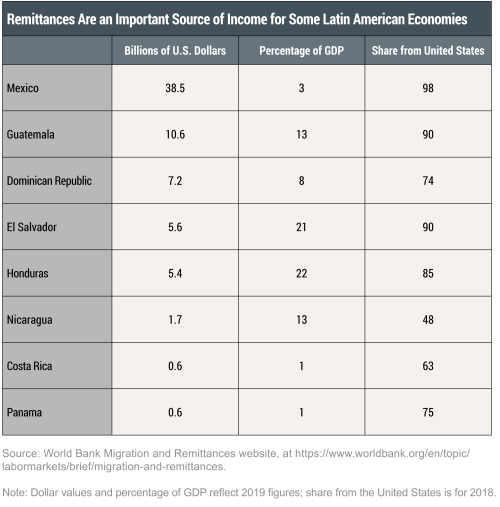 Remittance earnings can help support economic development over time and act as an automatic stabilizer during domestic downturns. These funds provide a particularly valuable source of foreign exchange during episodes of capital flight, helping to alleviate depreciation pressures on domestic currencies and upward pressures on interest rates.

The lion’s share of remittance flows to these countries comes from migrants residing in the United States: more than 90 percent for Mexico, Guatemala, and El Salvador. The relatively small U.S. share for Nicaragua, at just below 50 percent, reflects the large number of migrants from that country working in wealthier Costa Rica.

As for South America, remittance income is as high as 3 percent of GDP only for Bolivia and Ecuador, and these flows come mostly from outside the United States. (These countries are not otherwise discussed in this post.)

Resilience amidst a Pandemic

Remittance flows to our set of Latin American countries (LAC) faltered in the first several months of the COVID-19 pandemic and then recovered. The chart below shows the three-month average of remittance receipts for several LAC economies, indexed to set the fourth quarter of 2019 equal to 100. (Unfortunately, timely high-frequency data for Nicaragua are unavailable.) Remittance inflows fell off during the first months of the pandemic, though earlier and less sharply in Mexico than elsewhere. But inflows bottomed out over the course of the spring, and a clear rebound was under way across the region by June or July. For every country in the chart, remittance receipts had climbed well above their pre-pandemic baseline by September. 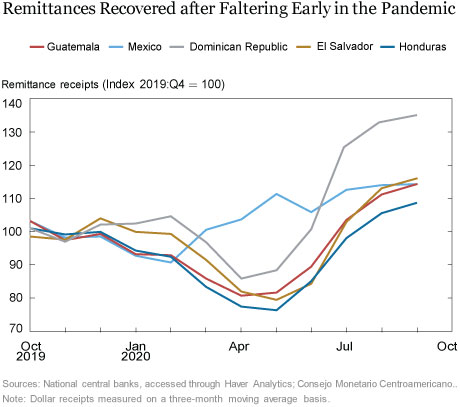 For most countries, the rebound has been enough to make up for the earlier decline. Remittances year-to-date are up from the same period last year for Mexico, Guatemala, and the Dominican Republic, and are essentially unchanged for El Salvador and Honduras, at +0.8 percent and -0.2 percent, respectively.

The resilience in remittances is surprising given U.S. labor market developments. The unemployment rate stood at a steep 7.9 percent in September, almost 4½ percentage points higher than in February (though well below its peak value in April). Total employment in September stood 10.7 million below its level in February, a drop of 7 percent.

This resilience is still more surprising given labor market conditions affecting the population sending the remittances. The U.S. Bureau of Labor statistics breaks out employment data for foreign-born Hispanic or Latino population. (Note that U.S. government statistics use “Hispanic” and “Latino” interchangeably to refer to persons with origins in a Latin American country other than Brazil.) Since these data are not seasonally adjusted, we applied our own seasonal adjustment for comparability with the aggregate figures. We find that the unemployment rate for the foreign-born Hispanic population was at 9.1 percent in September, 5.3 percentage points higher than in February. The level of employment was down 11.4 percent from February. These figures provide a good match with our set of remittance recipients. Together, Mexico, the Dominican Republic, El Salvador, Guatemala, Honduras, and Nicaragua account for roughly 80 percent of the U.S. foreign-born Hispanic population.

In short, foreign-born Hispanics have been harder hit by the recent recession than the general population. This owes in large measure to the industries where this population tends to work, given its outsized presence in leisure and hospitality and other low-wage service industries most affected by the pandemic. (Estimates from the Pew Research Center, based on tabulations of U.S. Census Bureau data, can be found here.) This drop in employment has been partly offset by the fairly muted decline in construction employment and agriculture, where the Hispanic foreign-born population also has an outsized presence.

The Role of Pandemic Support Payments

Official income support could explain some of the surprising stability of U.S. remittance outflows to date. Under the CARES Act passed in late March, all but high-income married households were sent a one-time payment of $2,400, and individuals were sent $1,200. This was supplemented by an additional $500 for each dependent child. The law also boosted unemployment benefits by $600 a week, a measure effective through July. Finally, the law expanded unemployment insurance eligibility to normally uncovered workers and provided for an additional 13 weeks of benefits for workers who have used up regular unemployment insurance, measures effective through late December. Together, these steps added about $610 billion to U.S. personal income through September. Higher ordinary unemployment insurance payments added perhaps another $120 billion to personal income, bringing total pandemic support assistance to $730 billion. As a result, personal income has recently been higher than prior to the pandemic.

These programs are open to naturalized foreign-born citizens and workers, as well as to “qualifying resident aliens” (with a few exceptions, green card holders). Estimates from the Pew Research Center indicate that roughly half of the U.S. population born in Mexico, Central America, and the Dominican Republic satisfy these eligibility requirements.

How much did residents born in these countries receive in pandemic support payments? To provide a rough answer, we apply the 50 percent eligibility figure to those countries’ shares in the U.S. population and U.S.&nbspworkforce. We find that about $24 billion went to U.S. residents born in Mexico, Central America, and the Dominican Republic in April through September. While we can’t observe the counterfactual, pandemic relief payments likely played a role in sustaining LAC remittances.

The Outlook for LAC Remittance Income

Developments surrounding the Great Recession can provide clues as to whether remittance income in Latin America can continue to hold up. The chart below shows combined remittance income for major remittance recipients in the region for the period 2007-14, alongside employment for the U.S. foreign-born Hispanic population. We index both series to 100 for the fourth quarter of 2007, the official business cycle peak. 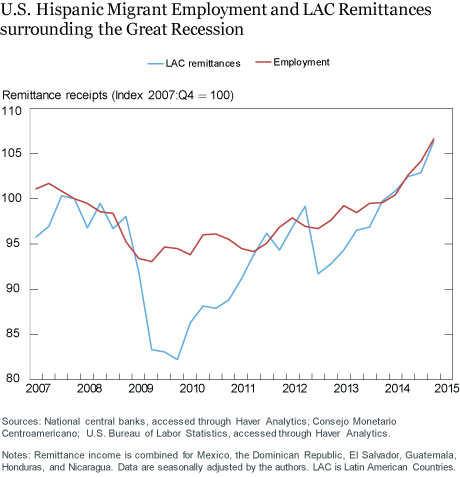 Of note, employment for the foreign-born Hispanic population was already trending lower in 2007. Employment fell sharply over the course of 2008, declining by roughly 5 percent. Remittances initially fell much less sharply, declining about 2 percent. But remittances plunged in 2009, dropping about 17 percent—and this despite only modest further job losses, at less than 1 percent.

This pattern points to an additional reason why remittances have held up thus far. Migrants likely respond to job losses with a lag, initially drawing on savings to support remittance payments. In this connection, reported personal savings out of CARES Act income was quite high, something that could help support LAC remittance income over the near term.

Employment picked up beginning in 2010, but the gains were small, mirroring developments in the broader U.S. labor market. Remittance growth also resumed, sometimes outpacing employment growth by a wide margin. But there was a lot of ground to make up. It wasn’t until early 2014 that foreign-born Hispanic employment and LAC remittances reached their earlier level.

It is encouraging that remittance inflow to LAC countries rebounded in the summer and that employment for the foreign-born Hispanic population has made up about half of the ground lost during the early months of the pandemic. But if the past is prologue, then there is a risk that remittance inflows will decline at some point without a much fuller labor market recovery.

Matthew Higgins is a vice president in the Federal Reserve Bank of New York’s Research and Statistics Group.

Thomas Klitgaard is a vice president in the Bank’s Research and Statistics Group.